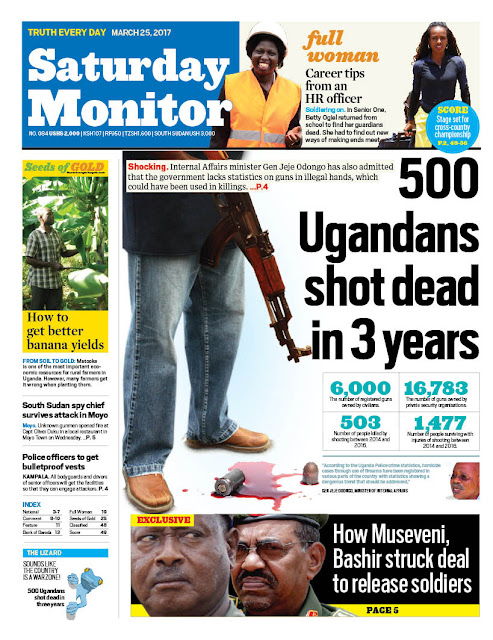 MARHA LEAH NANGALAMA – The following was just forwarded to me by someone who is in a group which is leaking information.  People in that group are also forwarding what is being said.  This is verbatim (not my style of writing) and please do not shoot the messenger.

The following revelations may seriously affect some big people and if I’m not careful I may also disappear but before I disappear.

Read this below.
Young rich men in town including public figures had beaten the standards and acquired Private small fire arms in pretext of protecting their businesses yet many of them could use them to intimidate people whom they wanted to evict on land and they would make several other threats to their would be enemies including small wars for women.

I found out that even if they could fire some Rounds of ammunition they would approach their friends who handle stores and could easily get replacement without a hustle and interrogation of how they used them.

When radio calls became easily purchasable from shops around town,these men could also acquire some to pose around as security operatives hence gaining access to every level they wanted .

Some months ago before administration changed there was a deal where over 300  guns were sold to some factory in Jinja which process scrap yet they were guns in good order,t they also sold magazines and tons of cartridges each kilogram at 5000/- plus many police safes which were still in good order, however the commissioner from classified equipment and consumables who did it is still at large despite the exhibits being at Nalufeenya custody in the yard.
This information is being sat on.

When the incident occurred he was transferred to PSU as commandant before he was replaced with Mr.okalanyi.
This is evidence that many guns are in public hands without a trace.

I will later talk about how police fuel was misused to the extent that it’s now almost three months police does not have operation fuel as a result of accumulated debts for oil companies.
I’m still cross checking my data on who did what.

Whoever has ever tampered with government resources in POLICE I have U and I will publish u phase by phase until ure all either out of office or in courts of law.

I pray that the new management gets closer to those bad apples and saves the institution.

I will keep using this open forum because it’s the only one that can afford to dismantle mafia system which has eaten up part of the government where as it’s beneficial to some few individuals and against government policy.
So bad!!
This information is in the interest of the tax payer.
Mwoyo Gwa Gwanga
#EEyeUganda

Did you find apk for android? You can find new Free Android Games and apps.
Sharing is caring:
insecurity, Guns, Opinion Uganda, Crime, Opinion No Comments » Print this News