UGANDA: Govt to preserve CHIMP but will not dig up the human mass graves 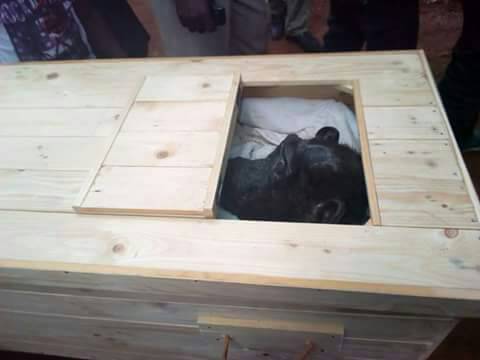 Zakayo was discovered in 1964 when he was just about one year old by a white man in Bundibugyo. He raised him until when the chimpanzee was 14 years before handing him over to the conservation authorities.

The Uganda Wildlife Education Centre (UWEC) will preserve the remains of Zakayo, the country’s oldest chimpanzee that died on Wednesday, April 25, 2018. The chimpanzee acted as the alpha male and was the oldest known captive chimp in the East, West and Central Africa. The chimpanzee, which spent 42 years in the custody of wildlife conservation officials, nurtured two young chimpanzees including “Matooke” who died in 2013 and later Aluma.

Zakayo was under treatment for three weeks until he died on Wednesday. However, officials from UWEC announced his death a day later after a postmortem had been done.


UWEC executive director James Musinguzi says Zakayo’s death is a big loss to the conservation fraternity since he acted as a legend and a signature specie that attracted tourists from across the world thus increasing revenue from tourism.

Zakayo’s internal organs will be buried today while his body will be preserved at the Uganda Wildlife Education Centre in Entebbe. Several tour operators across the country eulogised Zakayo as the first Chimpanzee that boosted the tourism industry.

Speaking to URN, Rashid Kiyimba, a tour operator indicated that several tourists who come to Uganda usually schedule to visit chimpanzees at UWEC with clear identification of Zakayo as a major attraction.