Sand Mining in Uganda Poses a Serious Threat to the Environment 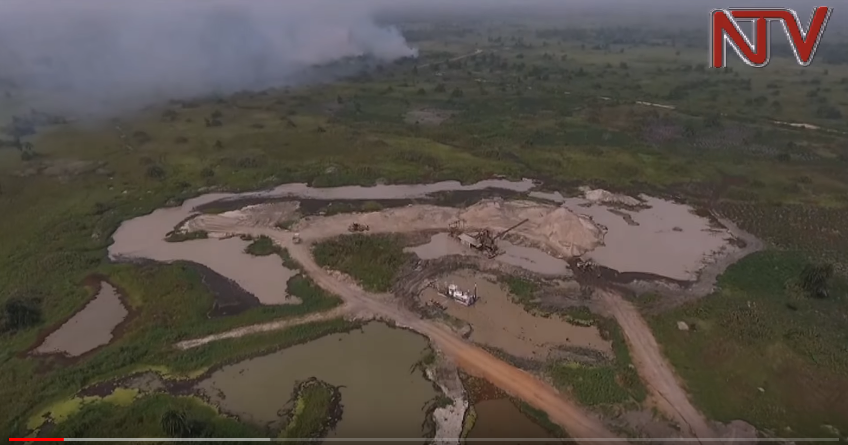 A screenshot of a YouTube video by NTV Uganda showing part of the excavations in the Lwera Wetland.

GLOBAL VOICES – Environmentalists in Uganda say an important wetland that runs along a highway linking the capital city of Kampala to the southwestern town of Masaka is being harmed by aggressive dredging to extract sand.

The Lwera wetland is a catchment area for several rivers that flow into Lake Victoria, and sand serves as a water purifier. It is home to various terrestrial and aquatic species, and there are concerns that the dredging, which reaches over 12 meters deep, could alter or destroy the habitat of fish that local fisherman rely on for their livelihoods.

The road Kampala-Masaka road could also be at risk for flooding, as the Urban and Infrastructural Development Conference warned on Twitter:

What is the water level between Lake Victoria and Lwera wetlands that will stop the water from flooding the road base and surface as well? Where there any hydrological as well as geology survey before sand mining to ascertain any risk on the highway?

There are regulations in place to control sand mining. But the National Environment Management Authority (NEMA) doesn’t have much of a budget to fund monitoring officers.

The chairman of the parliamentary natural resources committee, Alex Byarugaba, believed this contributed to NEMA failing to do its job to protect the environment by allowing companies to destroy the habitats of aquatic and terrestrial species:

NEMA is duty bound to regulate activities that happen on wetlands but because of the organization’s reluctance, environmental degradation is on the increase around areas where sand mining is being carried out such as the shores of Lake Victoria and Lwera

There’s also little appetite to stop mining because it would hinder “job creation”, or so supporters say. The Ugandan minister in charge of water and environment has stated that for this reason companies that are mining sand cannot be stopped, although he insists that all companies should do it in the right way.

According to the newspaper Daily Monitor, several government officials from NEMA have been to the site to stop the deep excavations reaching over 12 meters, but their operations were cut short due to lack of financing:

So far, according to Ayazika Waiswa, the Nema environment monitoring and compliance director, the mining companies in the areas have contravened their license obligations.

Most of the sand companies, according to Waiswa are scooping sand 12 meters underneath instead of the recommended three meters which enables easy regeneration of the resource.

“Through our routine inspections, we came and stopped them [sand miners] but later, our officers withdrew due to financial constraints and they [miners] came back,” Waiswa, said during a Nema board inspection recently.

But that is not the only violation; “…among the conditions we set out, they were not supposed to do mining in 200 meters from the road but they are not complying,” Waiswa, adds.

Dredging the sand 200 meters towards the highway puts the busy road, which connects Uganda to Tanzania on the brink of soil erosion through constant flooding and degradation.

A Twitter user Moriati X posed a question to the Uganda Police Force about their statement indicating that all overloaded vehicles must gain a license to transport goods. This follows him having seen heavily loaded vehicles carrying sand from Lwera.

And those trailers we saw carrying sand for mango tree in lwera. did you intercept? just asking.

Additionally, Chinese company known as Mango Tree has been in the spotlight over sand mining on the shores of Lake Victoria.

Mango Tree was charged with engaging in sand mining under the license of ship construction on the lake. According to a statement from NEMA:

a criminal case was opened against Mango Tree following a tip off that a large ship on Lake Victoria had been mining and dumping sand at Miami Beach in Luzira.

In a piece by NTVUganda, member of parliament and activist John Baptist Nambeshe cited corruption as a way that such companies get the licences.

Despite Uganda being a signatory to several United Nations multilateral environmental agreements such as the UNCBD for Biodiversity, UNFCCC for Climate Change, UNCCD for Desertification, Ramsar Convention for Wetlands and many more, the government of Uganda has not been able to effectively protect and ensure sustainable use of the environmental resources.

Did you find apk for android? You can find new Free Android Games and apps.
Sharing is caring:
salim saleh, nema, Sand mining, Uganda climate Others No Comments » Print this News