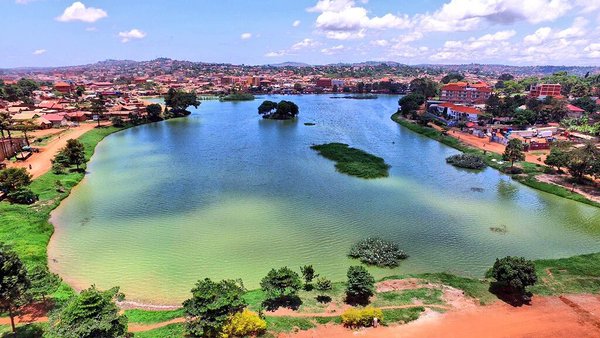 KAMPALA (@UG_EDGE) – This will be the second-time Uganda is taking on the water sport and China has pledged to support Uganda in bidding for hosting of the International Dragon boat competitions in future due to the country’s enthusiasm, capacity and political commitment towards the promotion and development of the water sport.

According to the Chinese Ambassador in Kampala, Zheng ZhuQiang, Uganda has the facilities needed for the sport but needs further development and preparation to reach the standard required and asked Uganda Government to consider investing in the sport.

The Chinese diplomat was meeting the Vice President Edward Kiwanuka Ssekandi in Kampala to brief him about his Government support for this year’s Dragon Boat Festival and the collaboration which will see Uganda prominently participating in the International Dragon Boat Olympics.

He said that through the Embassy, China will give 200 million shillings towards this year’s Dragon Boat event to be held at the UWEC in Entebbe and will also avail 10 Dragon boats worth 500 million to the sport in which Chinese teams from various provinces will take part.

He also revealed that the Chairman of the Chinese Peoples’ Consultative Council Wang Yang who is Chinese fourth top most personality of the leadership structure, the Vice President of China Peoples’ Association for friendship with Foreign Countries(CPAFFC) will be attending the event alongside other Government officials from China.

Ambassador Zheng said that, Wang Yang who will be visiting Uganda to further boost bilateral relations between the two countries, will during his stay in Uganda also take part in opening of Kampala expressway and switching on of the first engine of the 6 units at Karuma hydro dam.

The Vice President on behalf Government appreciated China’s support especially in the development of the Dragon boat Sport which he said will go a long way in promoting cultural interaction between the two peoples.

He said as the Chairman of China Africa Friendship Association, he was happy to see the Chinese and Africa sporting together saying that this year he has also extended invitations to representatives of other African countries to participate in the dragon boat activities in Uganda.

He also noted that although this was the second-time Uganda was having the Dragon Festival, the sport has already attracted a lot of enthusiasm and sport saying Uganda will be preparing dragon boat teams to compete at the various professional regional and international levels.

Ssekandi also said that Government will be working with Mengo to clean up the Kabaka’s lake in preparation for next year’s dragon boat competitions saying this year it will only be used for exercises by Kampala based teams like police and others.

The meeting was also attended by the State Minister for Tourism Godfrey Kiwanda who also commended the Vice President’s office for the dragon boat sport which he also said was one avenue of attracting tourists to Uganda.

The Uganda Dragon Festival 2018 that will be held at UWEC in Entebbe, will feature dragon boat racing in the professional, armature and women categories and also local canoeing in the respective categories.

The event on June 16th will also feature entertainment pieces by re-known Uganda and chines artists.