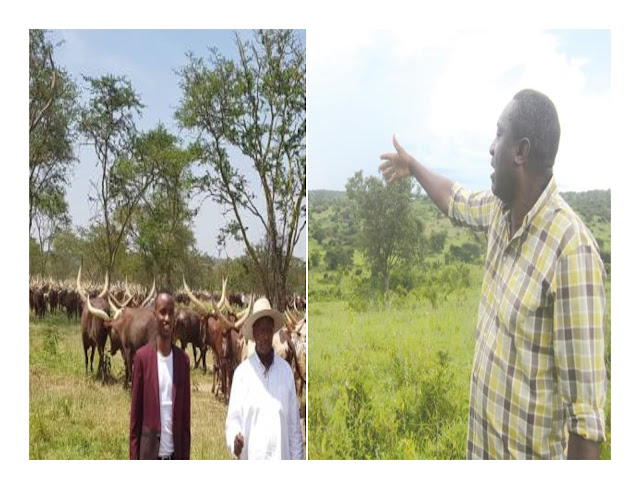 “Museveni found me working.  I was already a successful businessman.  He came to my home in Bugolobi and told me to
abandon my business and join the war.  He
told me that after the war I would be able to go back and do my business.  Now I want to do my business but see what I am
going through.  I don’t know what I have
done wrong.  People say that soldiers
like to use force, but I have exhausted all the legal means, secured a court
order but the police still do not subscribe to or want me to use my land.  What can I do?  All police officers tell me they can’t help
me because of instructions from above.
That above can only be President Museveni.  What did I do to him?  Why doesn’t he tell me what went wrong?  I am not going to go down on my knees to beg
what belongs to me”
Brig. Andrew
Lutaaya – interview with The Observer.
In 1977 Brig. Andrew Lutaaya bought a huge chunk of land in
Mubende.  When he joined Museveni’s Bush
War (1981 – 1986), Banyarwanda squatters occupied the same land.  In 1986 he got a lease and in 2003 he secured
a Land Tittle for the same land.  In the
mean time, more Banyarwanda squatters continued to flock and settle on his
land.
During the 1995 Constitution making process, Museveni
granted the Banyarwanda a blank cheque as far as Buganda’s land is
concerned.  They had actively helped him
during his sectarian war and he sought to reward them by enacting a provision
that legalized their illegal occupation of private land.  First, he Grant’s citizenship to all
Banyarwanda by identifying them as one of the indigenous tribes of Uganda.  Secondly, the Article 237 of the Constitution
directed Parliament to enact a law regulating the relationship between the
bonafide occupant of land and the registered owner of the land.  Consequently, S.29 (2) of the enacted Land
Act 1998 defined a bonafide occupant of land as a person who occupied any land
for 12 years or more years before the coming into force of the 1995
Constitution.
The law protected those who had been illegally sitting on
registered land for 12 years without being challenged by registered owners until
1995.  The 12 years was specifically
designed to cover the period of his Bush War and after he captured power in
1986.  This was the period when
Banyarwanda migrants and refugees who now wielded state power rushed to occupy
such land.  The provisions were therefore
meant to provide them with a legal backing.
It is during that period that the same people illegally occupied Brig.
Lutaaya’s land.  Many Ugandans fell
victim to such schemes.
After capturing power, Brig. Lutaaya was kind of an absent
landlord because he was busy with state duties.
When he retired and sought to utilize his land, the so called bonafide
occupants resisted eviction.  He managed
to compensate a few of them but the well connected stubbornly refused to
leave.  They pleaded bonafide occupancy
as per the constitution.  In 2002 he
pleaded with Museveni who sent his then State House Legal Officer, Fox Odoi who
reported back thus “Lutaaya is the rightful owner and the Tennant’s have
no plausible claim.”   Museveni just
kept a deaf ear and in 2003 Lutaaya went to court.  In 2008 court ruled that the illegal
occupants of his land “were not bonafide occupants of the land, since they
did not occupy the land in 1983 to qualify under the law.”
Following the court ruling, Brig. Lutaaya attempted to evict
the illegal occupants but was blocked by the police on orders of Gen. Kalekyezi
– the Munyarwanda police chief.  The
frustrated Brig. Andrew Lutaaya was compelled to run to the court of public
opinion hence the above quoted outbursts.
Brig.  Andrew Lutaaya was the only
civilian among the 27 men who launched Museveni’s Bush War in 1986. He is the
one that drove the lorry that carried the fighters that attacked Kabamba.  He is the one that carried a successful
reconnaissance on the areas in the Luwero Triangle where Museveni established
bases.  He is the one who was in charge
of canoeing Museveni across Lake Victoria whenever he would be stealthily
leaving and returning to the country. After capturing power Brig. Lutaaya
served in different high-profile positions before being grounded (Katebe) in
1994 which lasted several years before being eventually retired.
If such a high-profile person can yell in frustration, it is
no wonder ordinary Ugandans have given up and are now living at the mercy of
Museveni and his cohorts.  This is a
clear case of blood being thicker than water.
INFORMATION IS POWER AND THE PROBLEM OF UGANDA IS
MUSEVENISM.

Did you find apk for android? You can find new Free Android Games and apps.
Sharing is caring:
politics, UGANDA, rwanda Uganda, Rwanda, Politics No Comments » Print this News