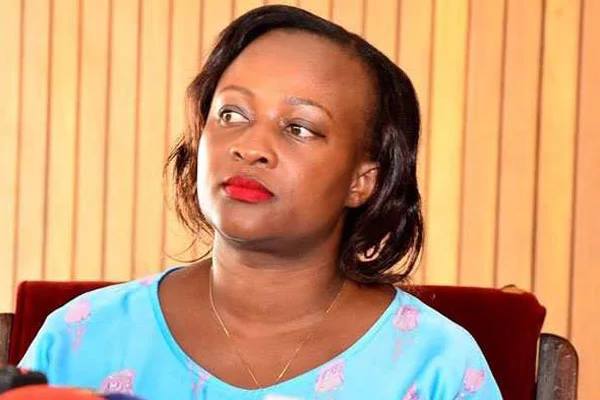 BRIAN ISIKO WAS ACCUSED BY THE POLICE AND IMPRISONED BY THE COURT; NOT HON. SYLVIA RWABWOGO

CHANGE OF GUARDS – Around November 2017 a young man, Brian Isiko initiated telephone contact with a female Member of Parliament (M.P), SyLvia Rwabwogo. He expressed his desire to have a love relationship with her. The M.P initially took it lightly but when the young man disclosed to the M.P that “he wanted to protect her after realising that she was in deep trouble, the M.P got concerned and reported to the parliamentary police post.

The parliamentary police is said to have blocked Isiko’s phone but he continued texting the M.P. Consequently, the same police organised a trap that netted Brian Isiko. He was taken into custody but interestingly, the M.P continues to receive text messages from Isiko’s phone number. How can a detained suspect’s phone continue to send text messages to the victim/complainant!!!

Hon. Sylvia revealed that after Brian made several attempts to woo her through Facebook, she was forced to block him. However, Brian was unfazed! He instead resorted to sending text messages and making phone calls.


According to Sylvia, Brian would make these calls late night, day time and early morning hours.
“I am a politician. I got concerned for my life. Imagine somebody you have never met starts calling you in the night, morning and throughout the day. At times, I would be going for work then he would call me just before I left my home. I got scared. It was like he was somewhere monitoring my movements”, she stated.

I hired and borrowed cars
Hon. Sylvia revealed that she was forced to hire and borrow cars to disguise her movements because she felt her life was in danger. I thought it was a normal approach but it was not. I stopped using my car. Whenever I was about to leave my home, he would call and say he was waiting to see me. He would send text messages.I had to hire and borrow cars from friends. I hired private security. I had to cancel those programs for the day. I have not done much because I have cancelled several programs. I am a politician. I have to move!
Don’t judge me.

The suspect was taken to court and accused of sexual harassment and he denied the charge and during the trial, the M.P testified. However, along the way the accused changed his plea and admitted the charges and the Magistrate convicted and sentenced him to two years’ imprisonment.

The public reaction has generally been characterized by scolding and condemnation of the M.P whom they accuse of imprisoning the young man for merely expressing his love. The M.P has come out to clarify as to why she reported the matter to police but to no avail. Most disturbing is that among her attackers are some people who are presumed to be right thinking members of the public like the former Presidential aspirant, Maureen Walube Kyalya.

These people are entitled to their opinion and my role is just to point out a few issues. Hon. Sylvia Rwabwogo only reported her security concerns to the police. It’s the police and DPP who belong to the executive arm of government that made the decision to arrest, detain and bring up charges against Brian Isiko before presenting him to court. In other words, it’s the state that had the mandate to protect its citizens that accused Brian Isiko. Sylvia Rwabwogo remained a complainant and a witness whom the law compels to testify in court. It was Brian Isiko who admitted to the charge and court had no alternative but to convict him.

May be those in defense of Isiko ought to blame court for not simply giving him a caution (never do it again) and set him free instead of imprisoning him. But again, court gave its reasons for arriving at that decision; that the accused had not shown any remorse and that “the intention is only known to him.” In criminal cases, establishing motive or intention is very important. In the instant case the police did not disclose the motive thus more cause for worry by Hon. Sylvia Rwabwogo. Can anyone explain why and how the suspect’s number continued to send texts even while he was under detention!!!!

Looking at this saga from another angle, it is a fact that the stranger, Brian Isiko initiated telephone contacts around November 2017 during the height of the Age Limit Amendment. Though a member of the regime, Hon. Sylvia Rwabwogo extraordinarily and courageously opposed the amendment. To the regime, this was high treason and any reasonable Ugandan very well knows that as is the norm, at one time she will pay. Intimidation by the regime is the usual practice against opposition and independent minded leaders. Sylvia Rwabwogo must have seen Brian Isiko’s offer of “protection against her being in deep trouble” from this angle. As a layman, I feel that Brian Isiko was being used by the state security agencies thus why he changed his plea in the middle of the trial to curtail further probe and that’s why he was not remorseful. Someone needs to confirm if he will serve the two years in detention.

To better understand my stupid argument, just look at this extract on Hon. Sylvia Rwabwogo’s interview with The Observer of 25th October 2017 below:

Now that the age limit may be removed, what next?

Power belongs to the people and I have listened to people in my area and outside. Those voices should not be ignored because it is about their future. I am not forcing my idea on them but I want their views to come out, unlike the manner in which we are being forced to take a position in NRM.
The consultations are not about convincing people. Some people are paying money to people, sometimes taking people to sign for it like they did with veterans in my district. If the people of Kabarole are left free to decide against my stand, I shall bring their views to Parliament.

Aren’t you afraid that your stand will be used by the party to fight you in the constituency?

Some members of parliament are really scared. I did not know it would come to this and I wished it had come at the end of the term. We are standing at crossroads; the demand from our party; then the fight with our conscience and the will of the people. If I follow my conscience, I will live with it forever. I would not lose it and lose my soul for anything because we are here in parliament in passing.  Maybe I will be here for one term but I would not want to tie my decisions to the interest of coming back to parliament.  Most people are actually afraid and think that if they say something contrary to the party position, they will be fought in the constituencies. Who says that people who have lost elections have been fought by government? We have seen people who have returned to parliament when they have taken decisions contrary to government positions.

So, are you persuading some NRM members you think are quietly opposed to the removal of age limits to join you?

We are talking with these people. We are not enemies and those we are talking to are willing to support us but still fear being torn between listening to their people and listening to the government.
That is the dilemma they are faced with. If we are going to divide ourselves for every decision, at the end of the day Uganda will not be one. We must enjoy our country irrespective of our tribal and political inclinations. I still belong to the NRM party and don’t hate it or my president. When I say this, people think I am trying to hide my decision but it is firm and I am not doing it in hatred.
I am not even looking at any other party but I want to serve NRM objectively, and not against my conscience. I have been in this party for the last 10 years; so, when I disagree with them objectively, I think I have the right to do so.  If you are vulnerable to anything, you will not be able to make a decision. There are many women who think like we do but for one reason or another, they fear to come out. Being a journalist by profession, it is within my training that you have to be objective at all times.

The NRM issued guidelines calling on its members to consult small, carefully chosen groups of people. Is that workable for you?

The regulations we are getting from the party are that we call party and religious leaders. I don’t want to be selective and I am not a delegate. I am a representative of [all] the people, not a selected section of the people. I do not only represent women, but represent all. These are matters for all Ugandans; so, we are going out to consult the general public. I am not campaigning or holding general rallies and speaking against this matter. I will educate them about the advantages of either decision. Depending on the majority’s decision, I will reserve my personal views in their favour.
=======


COMMENTS on THE OBSERVER
Quote | Report to Comments
#1 saeguya
2017-10-25 08:13
A lady with some balls, dignity intestinal fortitude, patriotism, and pure love for her motherland who should be emulated by peers, the men in Parliament especially.

#2 Magenge
2017-10-25 08:20
This is one of the brightest batooro I have ever known, unlike Mwenda and Kasango who are feasting on pensions money and talking nonesense non stop.

#3 kelem
2017-10-25 08:31
Majority NRM MPs sold their souls to the devil because of selfish motives.
These MPs are supper cheap indeed

#4 Lakwena
2017-10-25 12:09
This is being exceptionally bold and candid for first -timer NRM MP.
But I want caution my young sister, Hon Rwabwogo for loving what (NRM) she does not know. E.g. last week Mr. M7 made it public and in certain term that the NRM is a Master of Violence.
What does this mean? It means, unless Hon Sylvia Rwabwogo denounced and disassociated herself from that Mr. M7’s statement; all NRM members are inherently and collectively violent.
Before that, on 26th January 2017, Mr. M7 along the same line, proclaimed from the roof top that, he is in State House fighting only for himself and belief.
Because no NRM MPs or ordinary members condemned denounced Mr. M7, what does this also mean?
It means that all NRM members MPs or riffraff, are where they are; or do what they do only for themselves and not for the people of Uganda.
In other words what then is Hon Sylvia Rwabwogo in love with in the NRM party?

#5 Musana
2017-10-25 13:24
Sylvia and Ruhunda have done Tooro good.
However, we shall thank you after you have gone through all the trials and tribulations you are about to suffer.
Please, remain firm through it all, knowing that when you stand for truth, posterity takes note, and your reward will be great.
A good name is better than riches. Muliinde engeso enungi eza Tooro. May God give you the necessary strength, for courage you have.
=======


To better understand Hon. SyLvia’s situation, you need to receive a text message at midnight from an accused who is presumed to be in police detention.