UGANDA: Bishop tells Lukodi massacre survivors to just get over it! 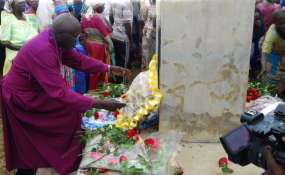 GULU (DAILY MONITOR) – Survivors of the Lukodi massacre in Bungatira Sub-county, Gulu District, where 69 lives were lost to suspected Lord Resistance Army (LRA) rebels, have hit out at the Rtd Bishop of Northern Uganda Diocese.

Speaking at the memorial prayers in honour of the 69 people, who were killed on May 19, 2004 by LRA rebels last Thursday, Bishop Nelson Onono Onweng allegedly accused survivors of spending more time lamenting about the attack instead of engaging in productive work.

The prelate accused them of wasting time drinking alcohol and laziness.

Speaking to the congregation that turned up for the prayers, the bishop said: “You the survivors of the massacre, should now focus on self-empowerment and identifying income generating activities instead of lamenting about the past war.”

Bishop Onono’s remarks, however, have since provoked rage among the survivors, who accused him of being “insensitive” to their plight.pe

“He is a resident of Lukodi here and he understands what we are going through. We wonder what triggered such talk. We have the land but our children are not learning and no government has ever empowered us to use our land for positive results,” Mr Charles Okwonga, one of the survivors said.

Mr Okwonga said in an interview early this week that some war survivors are still traumatised and need to be counselled and facilitated to move on.

“We are still grappling with the effects of the war and need to be helped to overcome them,” he said.

Ms Anna Aliya, 78, who lost her husband, said the clergy was “opening up old wounds, which were healing.”

“Look at me at this age, what can I do for myself? I lost my husband and two of my children were abducted,” she said.

She advised that Bishop Onono should instead put the government to task to ensure how best the survivors can be helped to live better lives.

“We would be told to register but at the end different people instead benefit. We are really so sorry if the bishop who resides in our neighbourhood does not sympathise with us,” Mr Lalobo said.

Bishop Onono said Acholi Sub-region has failed to make significant economic progress compared to other regions as people spend most of the time lamenting about the atrocities and drinking alcohol.

The long war in the region resulted in death of tens of thousands, 1.5 million people are estimated to have been confined in IDP camps, children turned into child soldiers and women sex slavery.

In 2014, government earmarked Shs20 billion to uplift livelihoods in West Nile, Acholi, Lango and the Teso-sub regions under the Peace Recovery and Development Plan (PRDP).

The programme was to be overseen by the then minister of State for Northern Uganda, Ms Rebecca Atengo and it was to benefit between eight to 13 households in each parish in the beneficiary districts.

During the service, the first LRA war memorial centre in Northern Uganda was also launched at Lukodi Primary school in honour of 69 people massacred by the LRA rebels.

Established with support from Foundation for Justice and Development Initiative, the centre contains different pieces of information on display, the profile of all victims, information about the Northern Uganda conflict, ongoing trial of Ongwen, drawings by survivors depicting the massacre, live testimonies and audio and visual information. —— AUTO – GENERATED; Published (Halifax Canada Time AST) on: May 24, 2018 at 07:44AM

Did you find apk for android? You can find new Free Android Games and apps.
Sharing is caring:
crime, UGANDA Uganda, Crime Comments Off on UGANDA: Bishop tells Lukodi massacre survivors to just get over it! Print this News