TURKEY: Erdogan calls on Muslim countries to unite against Israel slaughter of Palestinians 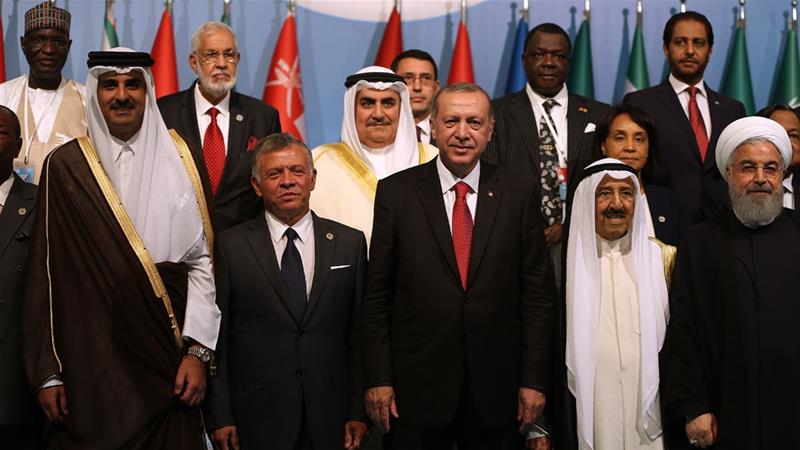 AL JAZEERA – Turkish president tells OIC leaders that Israel must be held accountable for the killing of Palestinians in Gaza Strip.

Istanbul, Turkey – Turkish President Recep Tayyip Erdogan has called on Muslim leaders to unite and confront Israel, days after scores of Palestinians were killed by Israeli snipers as they marked 70 years of Israeli occupation.

Speaking at an extraordinary summit of the Organization of Islamic Cooperation (OIC) on Friday, Erdogan said Israel should be held accountable over the killings which drew widespread international condemnation and triggered a wave of protests from Asia, through the Middle East, to North Africa.

“To take action for Palestinians massacred by Israeli bandits is to show the whole world that humanity is not dead,” Erdogan told the group of Muslim leaders gathered in Turkey’s largest city, Istanbul.

The Turkish president described Israel’s killing of Palestinians as “thuggery, atrocity and state terror,” and said the US’ recognition of Jerusalem as Israel’s capital would inevitably haunt it.
‘US part of the problem’

On Monday, as the United States went ahead with the controversial relocation of its embassy to Jerusalem, 62 Palestinians, including five children, were killed and more than 2,700 wounded as the Israeli army fired live ammunition and tear gas at protesters who had assembled hundreds of metres from a 1949 armistice line between Gaza and Israel.

The protesters in the besieged enclave had gathered for Nakba Day – a commemoration of the events of 1948 when Zionist paramilitaries ethnically cleansed Palestinian cities and towns. About 750,000 people were forcibly expelled from historical Palestine.

Several heads of state attended the Istanbul summit, but Saudi Arabia, the host of the 57-member OIC, sent only a senior foreign ministry official. Bahrain, Egypt and the UAE also sent lower-level ministers.

Speaking at the conference, Qatar’s Emir SheikhTamim bin Hamad Al Thani said the Palestinian cause had “become a symbol for oppressed peoples everywhere” and condemned Israel for the “brutal massacre” of peaceful demonstrators.

“Who among us does not know the declared siege forced on the Gaza Strip and the collective punishment against its population?” the emir said.

“The Gaza Strip has been transformed into a large concentration camp for millions of people who are deprived of their most basic rights to travel, education, work and medical treatment.

For his part, Palestinian Prime Minister Rami Hamdallah said the US had become “part of the problem and not the solution” and called the relocation of the embassy “an act of aggression against the Islamic nation, against Muslims and Christians”.

Jordan’s King Abdullah II urged the adoption of urgent measures to back “the resistance of Palestinians”, while Iranian President Hassan Rouhani called for economic and political measures against the US and Israel.

Late on Friday, the OIC issued a final communique calling on the United Nations to launch an international investigation into the killings in Gaza, the creation of an international protection force for Palestinians, and for the OIC to place economic restrictions on any countries, companies or individuals who recognise Israel’s annexation of Jerusalem.
Thousands protest in solidarity with Palestine

Earlier in the day, Erdogan told a raucous crowd of more than 10,000 people in Istanbul’s Yenikapi fairground that the Muslim world had to unite and “pull themselves back together”.

“Muslims are way too busy fighting and disagreeing with themselves, and shy away when confronted by their enemies,” he told the audience.

“Since 1947, Israel has been free to do what it likes in this region. They do whatever they feel like. But this reality can be undone … if we unite.”

Earlier this week, Turkey recalled its envoys to Israel and the US following the killings of Palestinians and the relocation of Washington’s embassy from Tel Aviv to Jerusalem.

Tolgar Memis, a German-Turk, said he came to the rally to support Erdogan’s recent remarks and policies against Israel.

“What we’ve seen over the last few years, all the injustice, and what happened earlier this week – it’s simply unacceptable.

“Erdogan has made great strides in defending the Palestinians, something he is obligated to do, and hopefully other leaders will follow his cue.” —— AUTO – GENERATED; Published (Halifax Canada Time AST) on: May 19, 2018 at 08:19AM

Did you find apk for android? You can find new Free Android Games and apps.
Sharing is caring:
world news World News Comments Off on TURKEY: Erdogan calls on Muslim countries to unite against Israel slaughter of Palestinians Print this News

« UGANDA: Jamil Mukulu will never get justice in Museveni’s regime (Previous News)
(Next News) Today in History – May 19 »