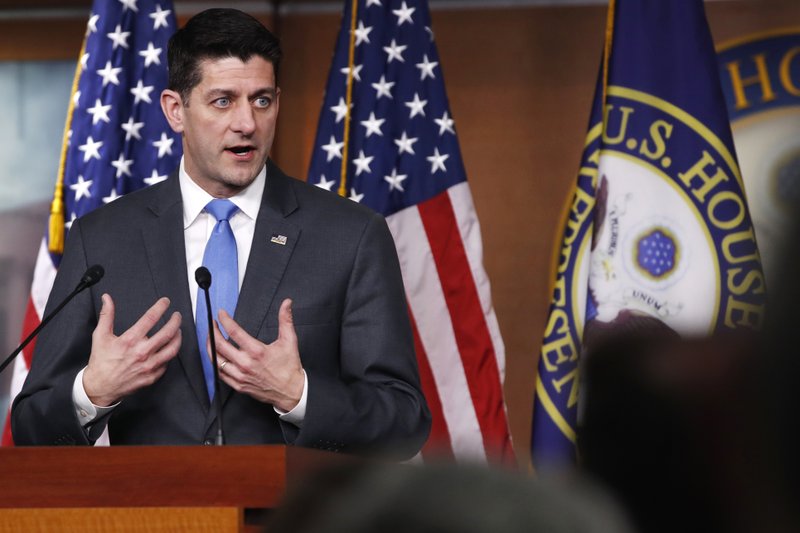 WASHINGTON (AP) — House Speaker Paul Ryan announced Wednesday he will retire rather than seek another term in Congress as the steady if reluctant wingman for President Donald Trump, sending ripples through a Washington already on edge and spreading new uncertainty through a party bracing for a rough election year.

The Wisconsin Republican cast the decision to end his 20-year career as a personal one, saying he did not want his children growing up with a “weekend dad.” Claiming he’s accomplished “a heckuva lot,” he said the party can point to strong gains as lawmakers campaign ahead of November elections. A self-styled budget expert, Ryan had made tax cuts a centerpiece of his legislative agenda, and a personal cause, and Congress delivered on that late last year.

“I have given this job everything I have,” he said. “We’re going to have a great record to run on.”

But Ryan’s impending departure also sets off a scramble among his lieutenants to take the helm. And it will fuel speculation that Ryan is eyeing a coming Democratic surge, fueled by opposition to Trump, that could wrest control of the House from Republicans’ grip. Several GOP veterans have announced plans to retire in recent months and another, Rep. Dennis Ross of Florida, followed Ryan on Wednesday. 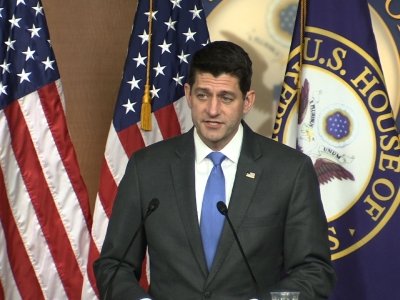 House Speaker Paul Ryan says he is leaving the speakership and retiring from Congress with “no regrets.” He says he has given the job “everything that I have.” (April 11)

After talking with Trump early Wednesday, Ryan, 48, first announced his plans at a closed-door meeting of House Republicans. Rep. Mark Walker of North Carolina said an emotional Ryan “choked up a few times trying to get through” his remarks to colleagues and received three standing ovations.

Moments later, Ryan told reporters that if he were to stay for one more term, his children — now all teens — would only know him as a weekend dad.

The speaker had been heading toward this decision since late last year, said a person familiar with his thinking, but as recently as February he had considered running for another term. His own father died suddenly of a heart attack when he was 16, and though Ryan is in good health, the distance from his family weighed on him. A final decision was made over the two-week congressional recess, which was partly spent on a family vacation in the Czech Republic.

Ryan called extended family and a few close friends Tuesday night and alerted a few staff. On Wednesday morning, after talking to the president, the vice president and fellow GOP lawmakers from Wisconsin, he gathered the rest of his staff before going to the conference meeting, officials.

Ryan, who has had a difficult relationship with Trump, thanked the president for giving him the chance to move the GOP ahead.

For many Republicans, Ryan has been “a steady force in contrast to the president’s more mercurial tone,” said Rep. Mark Sanford of South Carolina. “That’s needed.”

Ryan, from Janesville, Wisconsin, was first elected to Congress in 1998. Along with Reps. Eric Cantor and Kevin McCarthy, he branded himself a rising “young gun” in an aging party and a new breed of hard-charging Republican ready to shrink the size of government.

Ryan was pulled into the leadership job by the abrupt retirement of Speaker John Boehner in 2015. Boehner had struggled to wrangle the chamber’s restless conservative wing and failed to the seal big deals on fiscal policy he sought. Ryan had more trust with the hardliners in the House.

“That’s probably his greatest gift to us,” said Rep. Kevin Cramer of North Dakota. “His ability to bridge the vast divide.”

But Ryan ultimately had to wrestle with another unexpected challenge: Trump, a president with little of Ryan’s interest in policy detail or ideological purity. The two have had not had a close working relationship.

House Majority Leader McCarthy, a Republican from California known to be tighter with Trump, is expected to again seek the top leadership post that slipped from his reach in 2015. He will likely compete with Majority Whip Steve Scalise of Louisiana. Both men spoke at the closed-door meeting Wednesday, delivering tributes to Ryan.

Another potential rival, Rep. Mark Meadows, R-N.C., of the conservative House Freedom Caucus, demurred when asked if he’d pursue the speaker’s job. “Leadership has never been on my bucket list, and it’s not on my bucket list today,” he said.

Ryan’s announcement comes as Republicans are bracing for a potential blue wave of voter enthusiasm for Democrats, who need to flip at least 24 GOP-held seats in November to regain the majority.

As the House GOP’s top fundraiser, Ryan’s sudden lame duck status could send shockwave through donor circles that are relying on his leadership at the helm of the House majority. He has hauled in $54 million so far this election cycle.

“It injects some more uncertainty to be sure,” said the No. 2 Senate Republican, John Cornyn of Texas. “It’s just another issue that’s floating out there, and obviously there’s going to be some competition for his successor.”

A top GOP fundraiser, Eric Tanenblatt, expects Ryan to remain a force in a tough cycle. “Donors who are committed to making sure Republicans hold onto the majority will do whatever they have to do to make that happen,” he said.

In Wisconsin, the most likely Republican candidate for Ryan’s seat is state Assembly Speaker Robin Vos, multiple Republicans in the state said. Vos did not immediately return telephone or text messages.

Another Republican mentioned as a potential candidate is longtime Ryan family friend and backer Bryan Steil, an attorney and member of the University of Wisconsin Board of Regents. Steil did not immediately return an email seeking comment.

Democrat Randy Bryce, a colorful ironworker who has cultivated an “IronStache” moniker, had been Ryan’s best-known challenger, drawing liberal support from around the country. He had nearly $2.3 million in the bank at the end of the first quarter. Janesville teacher Cathy Myers was also running on the Democratic side. The only declared Republican was Paul Nehlen, who was banned from Twitter for a series of posts criticized as racist or anti-Semitic.

While his plans are uncertain once he steps down in January, Ryan has long said being speaker would be his last job in elected office. Others have suggested that an ideal job for the policy wonk could be running a think tank, noting the leader of the conservative American Enterprise Institute recently announced he would be stepping down.

UGANDA: MPs praise Winnie for backing Mandela in apartheid era IN era of discrimination in nation