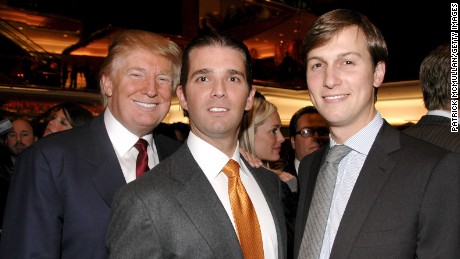 THINK PROGRESS – Spanish police secretly recorded conversations between Alexander Torshin, an official at Russia’s Central Bank with close ties to the NRA, and Alexander Romanov, a Russian who was convicted of money laundering, Yahoo News reports. The discussions were related to a meeting Torshin had with Donald Trump Jr. at the NRA convention in May 2016.

The tapes were then turned over to the FBI earlier this year. According to José Grinda, a Spanish prosecutor, that could be bad news for Trump Jr. “Mr. Trump’s son should be concerned,” Grinda told Yahoo News.

Torshin’s connections to the NRA — and the potential use of the group by Russia to influence the 2016 election — has drawn considerable interest, including from Senator Ron Wyden (D-OR). McClatchy reported in January that the FBI is investigating whether Torshin “illegally funneled money to the National Rifle Association to help Donald Trump win the presidency.” The NRA spent more than $30 million to boost Trump’s campaign.

Torshin was one of 17 Russians recently sanctioned by the U.S. Treasury Department.

In April, the NRA acknowledged receiving “23 donations from individuals tied to Russia since 2015” but denied receiving any substantial sums. The NRA told Wyden that Torshin only paid his annual dues but said that “[b]ased on Mr. Torshin’s listing as a specially designated national as of April 6, we are currently reviewing our responsibilities with respect to him.”

A report released in May by Dianne Feinstein, the ranking member on the Senate Intelligence Committee, said the committee received “a number of documents that suggest the Kremlin used the National Rifle Association as a means of accessing and assisting Mr. Trump and his campaign.” Feinstein’s report concluded that the “extent of Russia’s use of the NRA as an avenue for connecting with and potentially supporting the Trump campaign needs examination.”

Torshin’s relationship with the NRA began in 2011 when Kline Preston, a lawyer from Nashville, introduced him to David Keene, the NRA’s president at that time. Preston told The Tennessean in March that allegations that Torshin funneled Russian money to the NRA to boost Trump were “probably false.”

Trump Jr. has previously sought to downplay his meeting with Torshin at the NRA convention in 2016.

“Donald J. Trump Jr. was attending an NRA convention and having dinner when an acquaintance asked him to say hello to Torshin and made an introduction. They made small talk for a few minutes and went back to their separate meals. That is the extent of their communication or contact,” Trump Jr’s attorney, Alan Fuertas, told the New York Daily News.

The critical question is whether the secret recordings by the Spanish police, now in the hands of the FBI, tell a different story. —— AUTO – GENERATED; Published (Halifax Canada Time AST) on: May 27, 2018 at 11:53AM