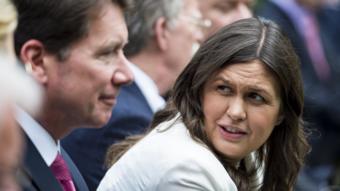 Sarah Huckabee Sanders, the White House press secretary, is planning to leave the administration, according to one US media outlet.

Ms Sanders responded to the story with a statement on social media saying she knew nothing about the story, but did not deny its accuracy. It all seemed very Trumpian.

First CBS News reported that Sanders and deputy press secretary Raj Shah was getting ready to head for the exit.

Does @CBSNews know something I don’t about my plans and my future? I was at my daughter’s year-end Kindergarten event and they ran a story about my “plans to leave the WH” without even talking to me. I love my job and am honored to work for @POTUS— Sarah Sanders (@PressSec) June 14, 2018
Report

Yet she does not say that the report is inaccurate. She just says she did not talk to the reporter before the piece was published.

As David Cay Johnston, author of The Making of Donald Trump, says, she is using a communications strategy that her boss, the president, often relies on.

“Her denial is: ‘I don’t know anything about this.’ She doesn’t say: ‘I’m not leaving’,” Johnston explains. “It’s what we call a non-denial denial.”

When I emailed Ms Sanders about the CBS story, asking for her reaction to the piece, she referred me to her tweet.
‘Well suited to her role’

President Trump and his aides can claim that an article is not true, describing it as fake news, and later if the report turns out to be accurate they can count on the fact that most people have already forgotten about what they said earlier.

In this way the president and his aides “muddy the water”, says Mr Johnston. Afterwards their supporters will defend them – and will also lash out at the media. 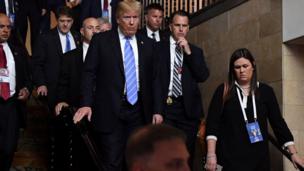 If Sarah Sanders does end up leaving the administration though, it will be a loss for the president. By nearly all accounts, she is good at her job.

David Litt, a former Obama administration official and author of the memoir Thanks Obama: My Hopey, Changey White House Years, says she seems particularly well-suited for her role in the Trump White House.

All administration officials, regardless of which political party they belong to, spin – they marshal facts to support an argument.

Yet Mr Litt says that those who work in the Trump White House have taken the art of spin to a new level: they “lie outright”. Nevertheless, he says, Ms Sanders seems “comfortable” with her work for the administration, describing her as someone who believes “facts should be entirely in service of ideology”.

Ms Sanders says she is not a liar. She clearly loves her work, and many people would be sad to see her go.
Did comedian’s Sarah Sanders ‘roast’ go too far?
White House aide red-faced over emojis

“I think she’s got a pretty good sense of humour,” says Victoria Snitsar, the state chairwoman for College Republicans of Kansas, who describes her as a role model. “And she doesn’t back down from tough questions.”
Safety fears

Sarah Sanders has a tough job – and a demanding boss. As the press secretary, she is responsible for delivering the president’s messages. Yet he likes to handle his own communications strategy and does not necessarily tell her beforehand when he is trying to get a message out to the public.

She gets frustrated when he talks to journalists – and not her – about his plans. As one White House official tells me, sometimes she will throw up her arms in surprise when she hears about what the president has said or done. (She gets frustrated with reporters, too, but that is normal for a press secretary). 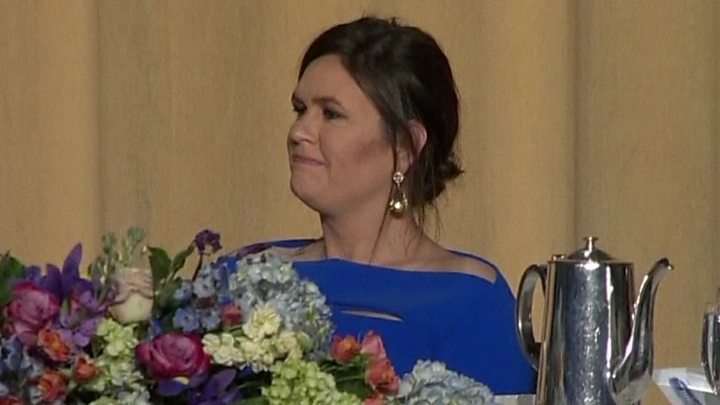 And while she is popular among other White House staffers and conservatives, she is often attacked by liberals on social media and has a high profile that makes her vulnerable.

I heard from a White House official that she cannot go shopping without being recognised and that she has received threats. Her colleagues worry about her – so much so that they have spoken in an informal way with the US Secret Service about getting a security detail for her.

A spokeswoman for the Secret Service did not get back to me when I asked for a comment, but two former agents tell me they have never heard of a security detail for a press secretary.

Still, they say, it is possible to arrange it – one of them says he thinks it is warranted in her case.

Ms Sanders would certainly have an easier time if she were not working for the White House, and daily life would be less stressful.

At this point, as she says, she is staying in her job at the White House. Still it is the Trump White House, and things change. As her predecessor, Sean Spicer, used to say: “Stay tuned.”

WORLD CUP 2018: Why Morocco was not embraced by all Africans

MOZAMBIQUE’s own version of Boko Haram is tightening its deadly grip – AFTER MUSEVENI VISITED THEM! WHAT A COINCIDENT