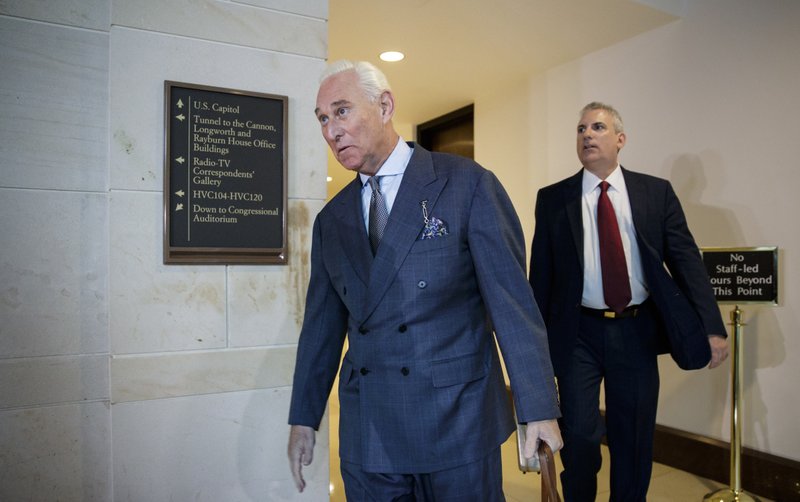 The meeting between Stone and a man who identified himself as Henry Greenberg was described in a pair of letters sent Friday to the House Intelligence Committee and first reported by The Washington Post.

Stone and Michael Caputo, a Trump campaign aide who arranged the 2016 meeting, did not disclose the contact in their interviews with the committee. But they now believe the man was an FBI informant trying to set them up in a bid to undermine Trump’s campaign. Greenberg could not immediately be reached for comment, but in a text to the Post he denied he was working for the FBI when he met with Stone.

The letters obtained by The Associated Press and written by Stone and Caputo’s lawyers say that, in late May 2016, Caputo received a call from his Russian business partner introducing him to Greenberg, who claimed he had information about Clinton that he wanted to share with the campaign.

Caputo suggested Greenberg meet with Stone, who had left the campaign in 2015 but remained an informal Trump adviser.

At Caputo’s request, Stone met with Greenberg at a Florida cafe, where Greenberg asked for $2 million in exchange for the information, according to Stone’s lawyer. Stone swiftly rejected the offer, explaining that neither he nor Trump would ever pay for “political information,” his lawyer wrote.

Both men say they quickly forgot about the episode, which marks the latest in a long list of unusual contacts between Russians and Trump campaign officials as well as offers of help.

The special counsel has spent months investigating Russian meddling in the 2016 election and whether Trump campaign aides played any role in the foreign interference plot. Trump and his lawyer, meanwhile, have tried to discredit the investigation, insisting it’s unfounded and plagued by misconduct and political bias.

As part of their campaign, Trump and his loyalists have tried to convince the public that the FBI violated its usual operating procedures, including installing “spies” inside Trump’s campaign, though there’s no evidence that’s the case.

“So, yes, sure, there was contact, as there was in that meeting. But that meeting led to nothing. This led to nothing. So, if anything, it’s proof there was no collusion,” he said in an interview with CBS’s “Face the Nation,” adding that Mueller’s team “can investigate from here to, you know, to Timbuktu, and they’re not going to find a darn thing.”

Both Stone and Caputo failed to disclose the Greenberg meeting in their interviews with the House Intelligence Committee — an omission their lawyers said was accidental.

Caputo’s lawyer, Dennis Vacco, said his client had “simply forgotten about this brief encounter in 2016,” and only remembered it as he was preparing for his interview with Mueller’s team.

Caputo told the AP that Mueller’s team asked him at length about the meeting.

“They knew more than I did, which set off alarms. I thought — was this a setup?” he recalled.

Caputo said he hired investigators using money from his legal defense fund to dig into Greenberg’s background and has produced a “dossier” with the findings, which Stone endorses.

“Mr. Stone believes it is likely that Mr. Greenberg was actively working on behalf of the FBI at the time of their meeting with the intention of entrapping Mr. Stone and to infiltrate and compromise the Trump effort,” his lawyer, Grant J. Smith, wrote.

The FBI declined to comment, but has said its counterintelligence investigation didn’t begin until July 2016, two months after the meeting.

The Washington Post, citing interviews and documents, reported that Greenberg has at times used the name Henry Oknyansky, and claimed in a 2015 court filing that he had been providing information to the FBI for 17 years.

The Post notes the meeting happened around the same time that others members of the Trump campaign were being approached by people with Russian ties offering dirt on Clinton.

Several members of the campaign were also approached by another U.S. government informant in a possible bid to glean intelligence on Russian efforts to sway the race. Several news outlets including the Post, The Wall Street Journal and NBC News have identified an FBI confidential source as Cambridge University professor Stefan A. Halper. —— AUTO – GENERATED; Published (Halifax Canada Time AST) on: June 18, 2018 at 08:22AM

Did you find apk for android? You can find new Free Android Games and apps.
Sharing is caring:
world news World News Comments Off on TRUMP dviser Roger Stone reveals new meeting with Russian to tune of $2mln Print this News