TRUMP: At least 12 states to sue White House over citizenship question on US census 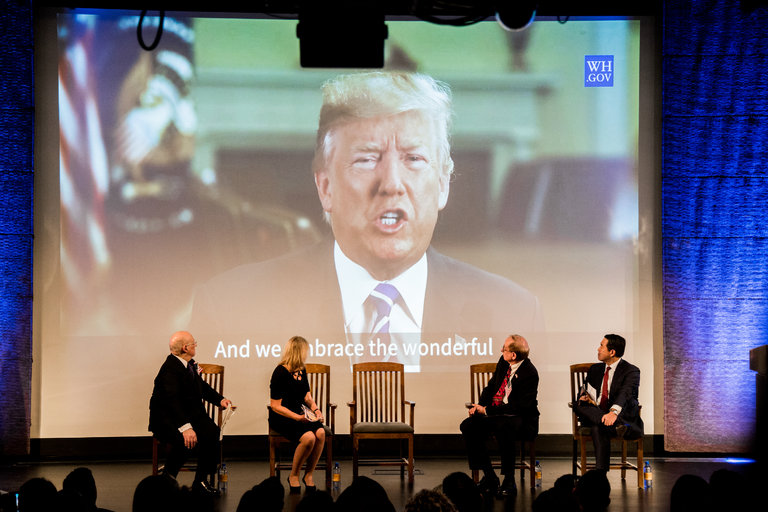 New citizens watched a video of President Trump during a citizenship ceremony in New York in 2017. The

Trump administration will add a question about citizenship to the 2020 census.
By Devin Yalkin for THE NEW YORK TIMESWASHINGTON – At least 12 states signaled Tuesday that they would sue to block the Trump administration from adding a question about citizenshipto the 2020 census, arguing that the change would cause fewer Americans to be counted and violate the Constitution.

The census is supposed to count everyone, said Massachusetts Attorney General Maura Healey. This is a blatant and illegal attempt by the Trump administration to undermine that goal, which will result in an undercount of the population and threaten federal funding for our state and cities.

The Constitution requires that every resident of the United States be counted in a decennial census, whether or not they are citizens. The results are used not just to redraw political boundaries from school boards to House seats, but to allocate hundreds of billions of dollars in federal grants and subsidies to where they are needed most. Census data provide the baseline for planning decisions made by corporations and governments alike.

Opponents of the added citizenship question said it was certain to depress response to the census from noncitizens and even legal immigrants. Critics accused the administration of adding the question to reduce the population count in the predominantly Democratic areas where more immigrants reside, in advance of state and national redistricting in 2021.

The Trump administration defended the citizenship question by saying it was needed to better enforce the Voting Rights Act, which relies on accurate estimates of voting-eligible populations.

The White House press secretary, Sarah Huckabee Sanders, said in a briefing that the decision to gather citizenship data through the decennial census was necessary for the Department of Justice to protect voters.

I think that it is going to determine the individuals in our country, and provide information that allows us to comply with our own laws and with our own procedures, she said.

Asked whether there would be outreach to ensure participation in immigrant-heavy regions like California, Ms. Sanders said she was not aware of those specifics.

Ms. Sanders also said the citizenship question had been included in every census since 1965, with the exception of 2010, when it was removed.

In fact, various citizenship questions have appeared in many censuses since 1850, especially during periods of high immigration. But it was dropped from the 1960 general census (there was no census in 1965) and relegated in 1970 to a longer list of questions that were asked of a small minority of residents. After 2000, the question was asked only on the American Community Survey, a separate voluntary poll of a fraction of the population that is conducted more frequently than the census.

Critics noted that the citizenship question was added at the last minute and the deadline for proposing new questions for the 2020 head count is April 1 and that it sidestepped the years of vetting undergone by every other question that will be asked. This month, they added, President Trump’s re-election campaign used the addition of a citizenship question in an emailed fund-raising appeal.

Mr. Schneiderman, the New York attorney general, said that adding the question was a reckless decision to suddenly abandon nearly 70 years of practice.  He argued that the move will create an environment of fear and distrust in immigrant communities that would make impossible both an accurate census and the fair distribution of federal tax dollars. 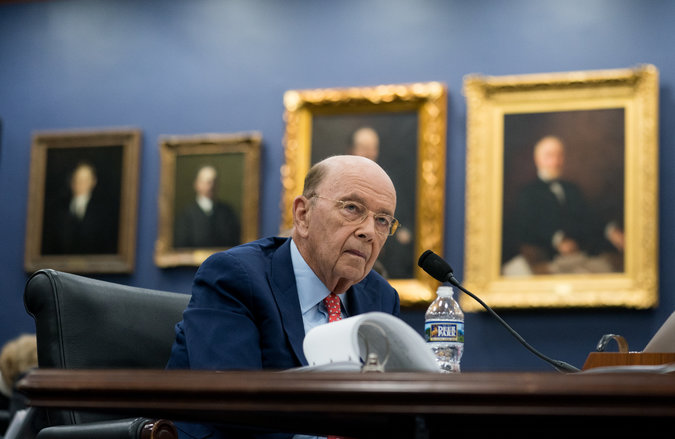 Wilbur Ross Jr., the secretary of commerce, at a hearing on Capitol Hill last week, said the question on citizenship would help enforce the 1965 Voting Rights Act. CreditErin Schaff for The New York TimesIn a seven-page announcement released late Monday, Wilbur L. Ross Jr., the secretary of commerce, foresaw those concerns, and sought to allay them. Decades of experience with citizenship questions on earlier censuses and other surveys, he stated, indicate that including it on the 2020 form would not deter people from volunteering to be counted. And he noted that other democracies, from Australia to the United Kingdom, routinely ask about citizenship in their head counts without any difficulty.

Mr. Ross, whose department oversees the Census Bureau, acknowledged that both outside experts and leaders within the bureau had been opposed to the change. But he said that â€œneither the Census Bureau nor the concerned stakeholders could document that the response rate would in fact decline materially.

And although the citizenship question was not tested for inclusion on the 2020 form, he said, it is used in the American Community Survey.

Kenneth Prewitt, a director of the Census Bureau under President Clinton, dismissed the administration’s rationale that the question is needed to enforce the Voting Rights Act.

‘It is certainly unnecessary’, said Mr. Prewitt, now a professor of public affairs at Columbia University. The Voting Rights Act is being administered very well with data from the American Community Survey. The Justice Department has ruled on that a number of times over the last 15 years.

The decision to add a question potentially throws a new degree of uncertainty into census preparations that already are well behind schedule and starved for money. The only full dress rehearsal of the 2020 census, unfolding this month in Providence County, R.I., has been scaled back in some areas. Tens of thousands of forms mailed to local residents this month do not contain the citizenship question.

Experts dismissed Mr. Ross’ statement that the citizenship question did not need further testing, arguing that the census and the American Community Survey differ in almost every aspect, from size to public awareness to whether a response is required. “When you do this once every 10 years, for 340 million people, you’ve got to get it right”, said William H. Frey, a University of Michigan demographer.

On Tuesday, critics of Mr. Ross’ decision made available a letter sent to Mr. Ross in January from six former directors of the Census Bureau who served under both Republican and Democratic administrations. The letter stated that they were deeply concerned that adding the citizenship question would considerably increase the risks to the 2020 enumeration.

There is a great deal of evidence that even small changes in survey question order, wording and instructions can have significant, and often unexpected, consequences for the rate, quality and truthfulness of response, said the former directors, who included Mr. Prewitt. The effect of adding a citizenship question to the 2020 census on data quality and census accuracy, therefore, is completely unknown.

Several of the states suing the Trump administration are run by Democrats, who risk losing representation if the census undercounts people of color.

Carmen Queveda, an undocumented immigrant in Los Angeles, said on Tuesday she was not about to step out of her house to participate in a census that inquires whether she is a citizen.

I would never answer, because I don’t have papers, said the 46-year-old native of Guatemala, who is also the mother of a 14-year-old American boy. Obviously, I am afraid. I have a son.

The last official estimate of the number of undocumented immigrants in the United States, made in 2012 by the Department of Homeland Security, placed the number at 11.4 million.

At a morning E.S.L. class in Queens, N.Y., at Sunnyside Community Services, about 30 students hailing from Spanish-speaking countries, the Middle East and Southeast Asia, were asked about the citizenship question by Johan Lopez, New York City’s director of adult and immigrant services. Mr. Lopez said their answer alarmed him.

I asked them directly how this would affect their ability to respond or whether they would even open the door, he said. All but one suggested that they likely wouldn’t open the door.