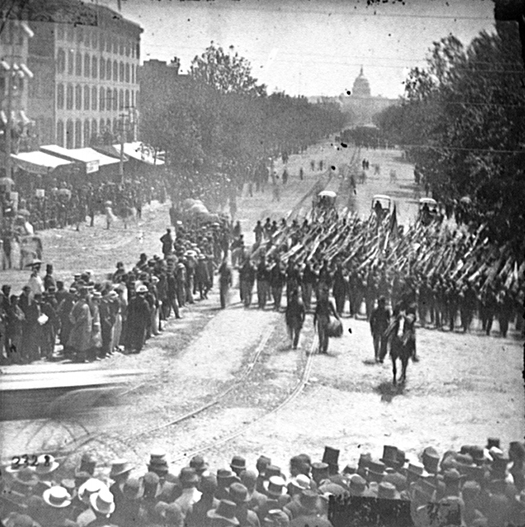 On May 23, 1865, the Army of the Potomac celebrated the end of the Civil War by parading down Pennsylvania Avenue in Washington, D.C. Only weeks before, mourners watched Abraham Lincoln’s funeral cortege travel the same thoroughfare. With many buildings still dressed in black crepe, this joyous procession could not help but remind spectators of that unhappy occasion. 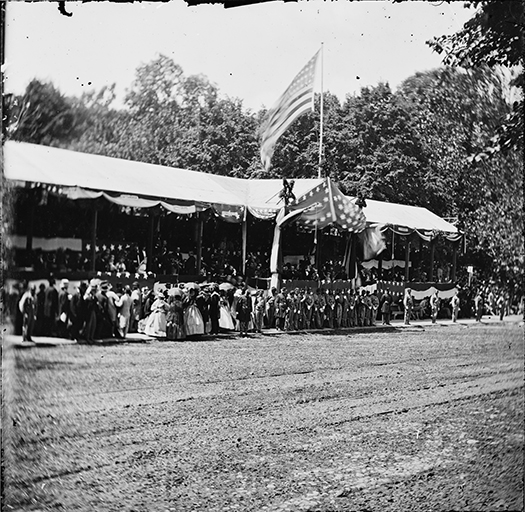 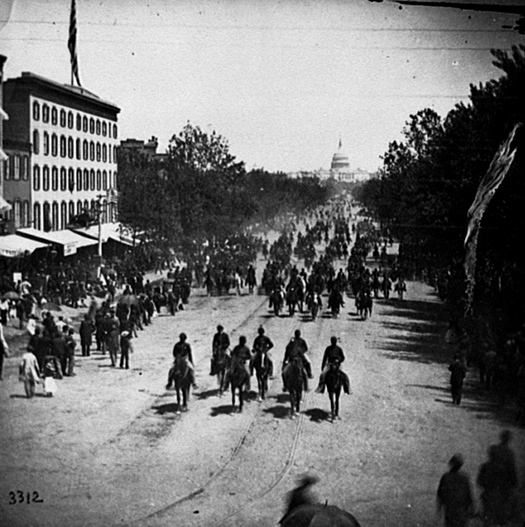 Washington, D.C. Another Artillery Unit Passing on Pennsylvania Avenue… Mathew B. Brady, photographer, 1865. Civil War Glass Negatives and Related Prints. Prints & Photographs DivisionLaid out by Pierre L’Enfant, Pennsylvania Avenue was one of the earliest streets constructed in the federal city. Both George Washington and Thomas Jefferson considered the avenue an important feature of the new capital. After inspecting L’Enfant’s plan, President Washington referred to the thoroughfare as a “Grand Avenue.” Jefferson concurred, and while the “grand avenue” was little more than a wide dirt road, he planted it with rows of fast growing Lombardy poplars.

Although Pennsylvania Avenue extends seven miles, the expanse between the White House and the Capitol constitutes the ceremonial heart of the nation. Washington called this stretch “most magnificent & most convenient” and it has served the country well. Ever since an impromptu procession formed around Jefferson’s second inauguration, each United States president has paraded down the Avenue after taking the oath of office. From William Henry Harrison to John F. Kennedy the funeral corteges of the seven presidents who died in office followed this route.

President McKinley’s Funeral Cortege at Washington, D.C.. United States: Thomas A. Edison, Inc., September 1901. The Last Days of a President: Films of McKinley and the Pan-American Exposition, 1901. Motion Picture, Broadcasting & Recorded Sound DivisionNot just the scene of official functions, Pennsylvania Avenue is the traditional parade and protest route of ordinary citizens. During the depression of the 1890s, for example, Jacob Coxey marched 500 supporters down Pennsylvania Avenue to the Capitol to demand Federal aid for the unemployed. Similarly, on the eve of Woodrow Wilson’s 1913 inauguration, Alice Paul masterminded a parade highlighting the woman suffrage movement. In July 1932, a contingent of the Bonus Expeditionary Force carried flags down Pennsylvania Avenue to the White House where they planned to form picket lines. Pennsylvania Avenue also has served as a background for more lighthearted celebrations, including a series of day and nighttime Shriner’s parades in the 1920s and 1930s.

Learn More
Photographs of the Grand Review of the Army, probably the work of Mathew Brady, are available in the collection Civil War Glass Negatives and Related Prints. Use the Timeline of the Civil War, 1865 to locate more images of the final days of the war.
The collection The Last Days of a President: Films of McKinley and the Pan-American Exposition, 1901 contains film footage of McKinley’s ride down Pennsylvania Avenue to the Capitol were he took the oath of office for the second time. The President’s funeral cortege, also captured on film, made the same journey just six months later.
The Detroit Publishing Company Collection contains eleven photographs of Pennsylvania Avenue at the turn of the century. Compare these images with photographs by Theodor Horydczak taken in the 1930s and 1940s and available in the Horydczak Collection. Search each of these collections on Pennsylvania Avenue to access these pictures.

President William Howard Taft presided over the dedication of the New York Public Library External on May 23, 1911.

Built on the site of the Croton Reservoir, the immense marble Beaux-Arts structure required a decade of preparation and construction. With room for exhibitions as well as a picture gallery, the New York Public Library was designed to meet a variety of educational needs. Strategically situated above seven floors of stacks, its main reading room provided researchers with requested materials as quickly as possible. 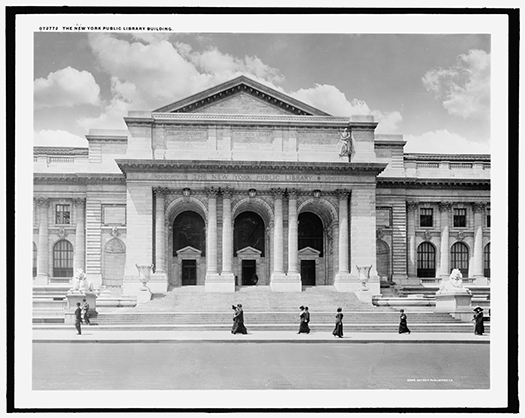 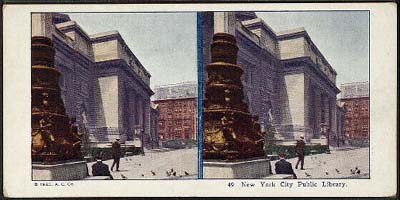 “It can hardly be thought extravagant to say that no site better adapted for a structure of suitable proportions for a metropolitan library could be carved out of any part of the city than this of Bryant Park. It is on the highest ground between the Central Park and the Battery; it is, and will continue to be, central as long as any place in New York is ever likely to be central…”