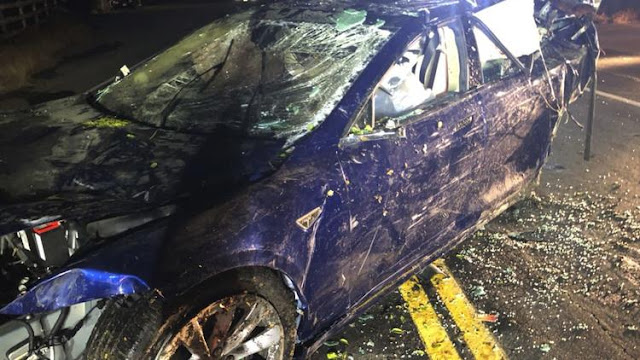 LA TIMES – Authorities are investigating the death of a motorist after the Tesla Model S he was driving veered off a road and into a pond. The vehicle was hauled out of the pond on Monday. (Associated Press)
Associated Press

Authorities in the San Francisco Bay Area are investigating the death of a man after a Tesla car he was driving veered off a road, crashed through a fence and into a pond. It is unknown if the vehicle was in Autopilot mode.

Kelly said it was too soon to know if the vehicle’s semiautonomous Autopilot mode was engaged when the crash occurred or whether the driver was speeding or intoxicated.

Photographs of the car show that its back end was destroyed, its hood crumpled and windows shattered.

The crash occurred near the cities of San Ramon and Danville on Sunday evening, Jacowitz said. A property owner contacted authorities after hearing noise and seeing damage to his fence and tire tracks.

The Alameda County Sheriff’s Office sent a rescue team and divers who found the vehicle submerged in the pond, with the driver still seated in the vehicle, Jacowitz said.

The driver’s speed in the 35-mph zone was not yet known, but “it was great enough to leave the roadway, hit a fence, keep going down an embankment and into a pond on the property,” Jacowitz said.

Federal transportation authorities are investigating a March 23 crash of a Tesla Model X SUV on a California highway. The driver was killed. Authorities are looking into the performance of Tesla’s semiautonomous Autopilot driving system. —— AUTO – GENERATED; Published (Halifax Canada Time AST) on: May 21, 2018 at 03:31PM