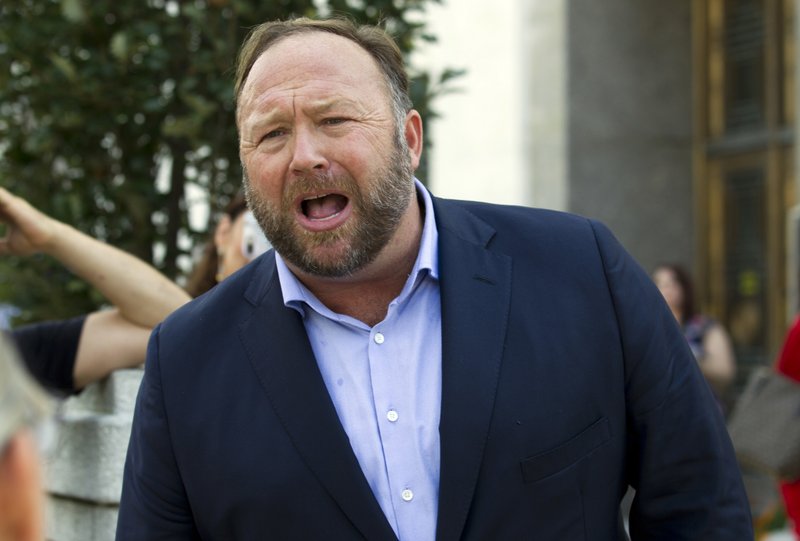 The company said Jones won’t be able to create new accounts on Twitter or take over any existing ones. In a tweet, it said it would continue to monitor reports about other accounts potentially associated with Jones or Infowars, and will “take action” if it finds any attempts to circumvent the ban.

Twitter said Jones posted a video on Wednesday that violates the company’s policy against “abusive behavior.” That video showed Jones berating CNN journalist Oliver Darcy for some 10 minutes in between two congressional hearings on social media. Dorsey testified at both hearings, but did not appear to witness the confrontation.

Jones had about 900,000 followers on Twitter. Infowars had about 430,000. Jones did not immediately respond to a request for comment.

Twitter had previously suspended Jones for a week. But until now it had resisted muzzling Jones further. Other tech companies have limited Jones by suspending him for longer periods, as Facebook did, and by taking down his pages and radio stations.

Radio host Alex Jones showed up before a Senate hearing on social media to blast the Democratic party, the leading tech companies and others, claiming they are working together to silence conservative voices ahead of the midterm elections. (Sept. 5)

Jones heckled Darcy in a Capitol Hill hallway where reporters were waiting to enter the House committee room. He criticized the journalist’s reporting and appearance, referencing his “skinny jeans” and repeatedly saying, “just look at this guy’s eyes” and “look at that smile.”

Darcy has aggressively questioned social media companies about the forbearance they showed Jones, asking why they have allowed him to remain on their platforms for as long as they have.

Jones is currently active on Facebook; his personal suspension there recently expired. Apple, YouTube and Spotify also permanently removed material Jones had published. Facebook did not immediately respond to a message asking whether it would also ban Jones.

Dorsey originally defended his company’s decision not to ban Jones, tweeting that Jones “hasn’t violated our rules” but if he does “we’ll enforce.”

“We’re going to hold Jones to the same standard we hold to every account, not taking one-off actions to make us feel good in the short term, and adding fuel to new conspiracy theories,” Dorsey tweeted on Aug. 7 , after the other companies took action against Jones.

But a week later Twitter joined the other tech companies in muzzling Jones, even if it was only for a week. It was a significant move for a company one of its executives once called the “free speech wing of the free speech party.”

But critics warn there is another side to high-profile cases such as this one.

“We should be extremely careful before rushing to embrace an internet that is moderated by private companies by default,” said David Greene, civil liberties director at the Electronic Frontier Foundation in an email last month. While high-profile cases of highly offensive content being taken down gets a lot of attention, he added, content moderation “continues to silence” the voices of people around the world struggling to be heard.