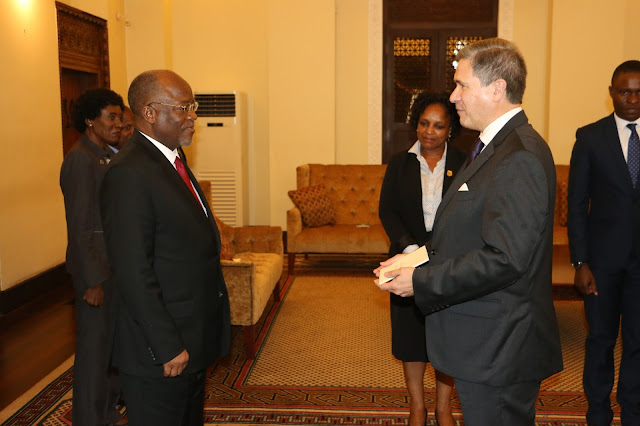 FRENCH Ambassador in Tanzania, Frédéric Clavier, has assured Tanzanians that his country is fully committed to continuing investing in the country’s big projects, due to the current political stability and flourishing economy.

The ambassador said in Dar es Salaam yesterday that Tan- zania’s economy was not only strong in the East African region, but in the continent as well.”France is ready to support President John Magufuli’s industrialisation drive and the France business community is confident with the future of this country,” added the envoy.

Mr Clavier was speaking at a joint media briefing on the sidelines of the second Tanzania- France Business Forum which was organised by Tanzania Private Sector Foundation (TPSF) and MEDEF International, the French Business Confederation.

The French delegation from over 35 business companies is in the country to explore various business opportunities, after an invitation by the Tanzanian Ambassador in France, Mr Samwel Shelukindo.

According to Mr Shelukindo, following Dr Magufuli’s directive to all envoys representing Tanzania outside the country to capital- ise on economic diplomacy, he managed to invite more French investors to come to Tanzania and grab various investment opportunities.

The minister for Industries, Trade and Investment who also attended the forum said Tanzania was currently wooing investors who will come to the country and establish industries to assemble motor vehicles.

He commended the French investors for coming to explore investment opportunities, assuring them of the government’s support.

“There are larger French companies like Total which has a big market share and it is the company that is involved in the Hoima Tanga crude oil pipeline project,” he added. According to the minister, as the country continues with the implementation of the Second Five-Year-Development Plan, the Private sector was a main pillar.

“All investment doors are open and there is no any shutting mechanism because we want to make Tanzania a trading hub in Southern Africa,” he said. Already, added Mr Mwijage, one of the French companies was putting up an investment to build a factory that will have a capacity to produce 500,000 tonnes of cassava flour per year.

Did you find apk for android? You can find new Free Android Games and apps.
Sharing is caring:
business, Tanzania, Politcs Politcs, Business, Tanzania No Comments » Print this News