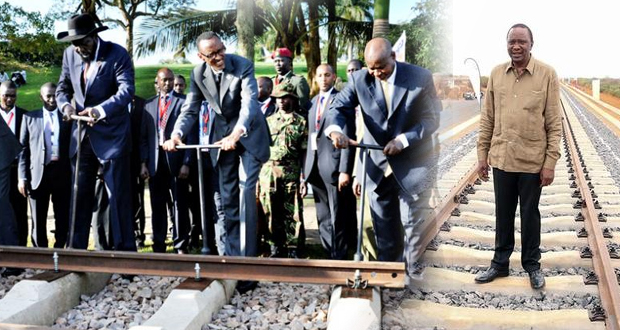 A construction worker at the Trial section of the Standard Gauge Railway (SGR) at Mtito Wa Ndei, Kenya. The cost of the 521km Isaka-Kigali section is estimated at $2.5 million. FILE PHOTO | NATION

THE EAST AFRICAN – Tanzania could turn to World Bank to finance the construction of its electric standard gauge railway (SGR).

Finance and Planning Minister Dr Philip Mpango on Monday said that the World Bank had expressed its intention to help fund the Isaka-Rusumo SGR section and Rwanda’s section from Rusumo border to Kigali, along with other transport infrastructure projects.

This would be an about-turn from President Magufuli’s earlier stance that Tanzania would finance its multibillion-dollar railway, aircraft modernisation and energy projects.

About two years ago, President Magufuli asked for money to finance infrastructure project from the World Bank Group president Dr Jim Yong Kim, who was on a visit to Dar.

Budget allocation
And now, Dar has announced setting aside over $610 million in the 2018/19 budget for the construction of the 300km SGR between Dar and Morogoro; and the 336km Morogoro-Makutopora line.

This is significantly higher than the $392.23 million set aside in the current financial year.

Transport and works Minister Makame Mbarawa told parliament that an additional $435,821 had been set aside for a feasibility study into the proposed 371-kilometre SGR project linking Isaka and Rusumo in Rwanda.

Dr Mpango’s meeting with World Bank officials in Washington D.C. now sets in motion the discussions between Dar and Kigali over the railway project as the two countries look for a workable financing mix to actualise it.

The World Bank has in the last year increased its funding for Tanzania’s infrastructure projects, providing a $340 million loan last year to help Dar upgrade its port infrastructure.

Last year, the bank announced that Dar would be able to access up to $2.4 billion in concessional financing over the next three years, an increase of $500 million over previous allocation.

Out of this, $780 million would go into financing the Ubungo Interchange in Dar, while $225 million would fund the Second Water Sector Support Project, and a further $130 million provided as an additional financing for the Tanzania Strategic Cities Project leaving a further $1.13 billion for Dar to draw down for its other infrastructure projects.

It will, however, be interesting to see the financial financing model for the project given that the two countries have in the recent past preferred a different mix of models to fund their infrastructure projects.

“We have different financing models to choose from and I believe we will consider one that’s better for our people. At the moment, we can’t give a clear indication on what model we prefer as we have not reached that stage yet,” Mr Mbarawa added.

« UGANDA: Govt to preserve CHIMP but will not dig up the human mass graves (Previous News)
(Next News) UGANDA: Fresh landslides slam Bududa, residents holing up in churches, schools »

UGANDA: Govt to preserve CHIMP but will not dig up the human mass graves