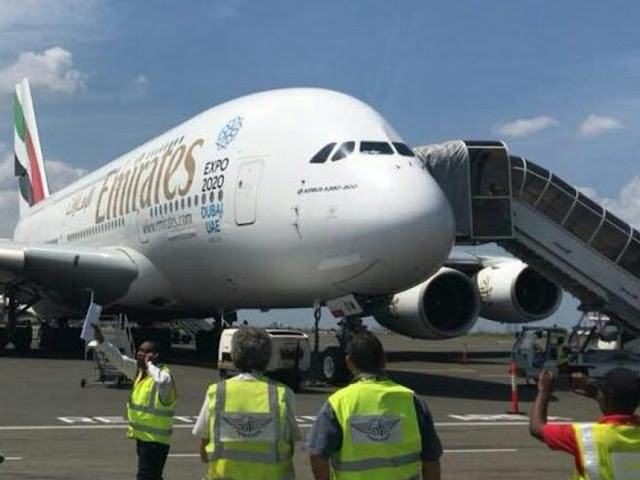 A Big Plus As Huge Plane Lands in Dar

TCAA Director General Hamza Johari said in Dar es Salaam yesterday that the airport had all it takes in an event a pilot of a big aircraft makes a decision to divert to JNIA.

“There are reasons that make a pilot to land at an airport on diversion, among them runaway capacity, navigation height, fire category, ground handling equipment, safety maturity level, aviation security, operational issues, facilitation capacity levels and other consideration, among others,” he said.

He was giving clarifications on the recent diversion landing of the largest aircraft identified as Emirates Airbus A380 that was forced to land in Dar es Salaam instead of its final destination Port Louis Airport in Mauritius due to bad weather.

According to him, the assessment made by the pilot of the plane, JNIA was the best option for such factors, among others. Mr Johari revealed that the absence of such factors would impede the plane’s proper landing.

Much as it was peak hours but still the flight was accommodated and everything turned out well. Besides the smooth landing, the plane opened a room for doing business due to the various services offered to the aircraft and passengers. “For the plane has a fuel capacity of 32,000 litres; it made a refill of 90,000 litres… all the 503 passengers and crew who were in the flight were transported to and from the airport safely,” noted Mr Johari. He pointed out that the 476 passengers and 27 crews were all booked in hotels.

The DG did not reveal figures based on revenues generated from the landing of the aircraft as the process involved several stakeholders.

Since the aircraft possessed an upper deck, the DG observing that the condition created in a bit of complications for passengers who had to use the same airbridge exit. Such challenges had been foreseen earlier; he therefore observed that once terminal three becomes operational such issues would be tackled.

“We extend gratitude to Emirates for choosing JNIA as diversion point; the aircraft could simply opt for other reachable airports such as Madagascar, Johannesburg among others. I would like to applaud the good job done by TCAA, Swiss Port, the Immigration Department, the hotels and others who participated in the process landing the aircraft,” observed the DG.

In another development, the DG disclosed the visit of the President of the International Civil Aviation Organisation (ICAO), Dr Olumuyiwa Benard Aliu to Tanzania. He pointed out that the coming of the fifth phase government had enabled Tanzania boost its safety maturity level from the former 37 per cent to the current 64.35 per cent. Such revelations were made based on an assessment carried out by a team of experts in 2017.

Mr Johari elaborated that the plan is to reach 75 per cent in the near future. Based on such attainment, Dr Aliu will come to Tanzania to present an award to the President as a normal ritual for any country that had obtained a safety maturity level of above 60 per cent —— AUTO – GENERATED; Published (Halifax Canada Time AST) on: April 28, 2018 at 07:48PM

UGANDA to borrow $212mln from China to help sell electricity