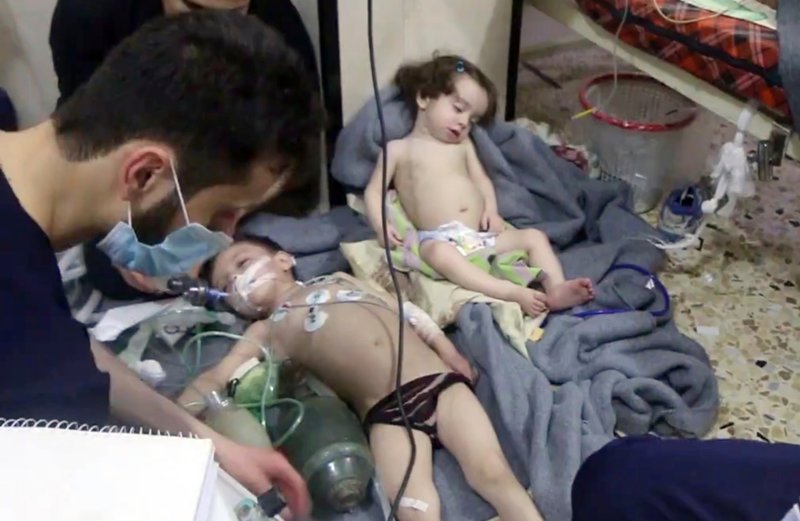 BEIRUT (AP) — The international chemical weapons watchdog said Tuesday it was sending a fact-finding mission to the Syrian town where a suspected chemical gas attack took place over the weekend, following a request from the Syrian government and its Russian backers that appeared to be aimed at averting punitive Western military action.It was not immediately clear whether the announcement would delay or prevent a U.S. strike in Syria. President Donald Trump has vowed to respond “forcefully” to Saturday’s attack on civilians in the town of Douma, and warned that Russia — or any other nation found to share responsibility — will “pay a price.”

In a statement, the Organization for the Prohibition of Chemical Weapons said a fact-finding mission was “preparing to deploy to Syria shortly,” though it did not give a more precise timetable on when the inspectors would arrive.

Trump on Tuesday cancelled plans to travel to South America later this week, choosing to stay in the United States to manage the response to the events in Syria. The White House said he later spoke with British Prime Minister Theresa May and the two “agreed not to allow the use of chemical weapons to continue.”

Trump also discussed Syria with French President Emanuel Macron, who said Tuesday that France would decide in the coming days on “a strong and joint response” with the U.S. and Britain to the suspected attack.

The incident has sparked international outrage and ratcheted up tensions in the already volatile Mideast, raising the specter of possible imminent American retaliation amid Russia’s warnings against any such action, and denials that any chemical weapons attack took place.

Adding to the tensions, Iran, a strong ally of Syrian President Bashar Assad, threatened to respond to an airstrike on a Syrian military base on Monday that the Syrian government, Russia and Iran blamed on Israel.

Seven Iranians were among the estimated 14 people killed in the missile strike, and a senior Iranian official visiting Damascus said the attack “will not remain unanswered.” Ali Akbar Velayati, an aide to Iran’s supreme leader, spoke upon arrival in the Syrian capital on Tuesday.

The Syrian air base was struck by missiles a little more than 24 hours after the alleged chemical attack. Israel does not typically comment on its operations in Syria, and it is unclear whether the missile attack was linked to the alleged use of chemical weapons.

Iran is one of Assad’s strongest backers and has sent thousands of troops and allied militiamen to support his forces.

Syrian government forces were on high alert and taking precautionary measures Tuesday at military positions across the country amid fears of a U.S. strike in the aftermath of the attack near Damascus.

At the United Nations, meanwhile, Russia vetoed a U.S.-drafted U.N. resolution that would have condemned the suspected gas attack and established a new body to determine responsibility for Syrian chemical weapons attacks. The vote Tuesday in the 15-member Security Council was 12 in favor, with Bolivia joining Russia in voting “no,” and China abstaining.

Chemical weapons attacks have killed hundreds of people since the start of Syria’s conflict, with the U.N. blaming four attacks on the Syrian government and a fifth on the Islamic State group.

The OPCW, in its statement, said its technical Secretariat has asked the Syrian government to make the necessary arrangements for the deployment of a fact-finding mission. The group is the implementing body for the Chemical Weapons Convention of 1997, which has been signed by 192 member states.

Syria became a member in 2013 as part of a deal brokered by the U.S. and Russia after a chemical attack in eastern Ghouta killed hundreds of people. That attack was widely blamed on government forces, who denied responsibility.

Syrian opposition activists and paramedics said more than 40 people were killed in last weekend’s suspected chemical attack and blamed the government. The Syrian government and its Russian backers strongly deny the allegations, and questioned whether a chemical weapons attack even took place.

U.N. Secretary-General Antonio Guterres said Tuesday he was outraged by the reported attack, and that the use of chemical weapons would be a violation of international law. He also reaffirmed his support for an OPCW investigation.

A senior Russian lawmaker said Tuesday that Moscow is willing to help arrange an OPCW visit to the site of the suspected attack. Yevgeny Serberennikov, from the defense committee at the Federation Council, told the RIA Novosti news agency that Russia is eager for the OPCW to “finally start carrying out the functions it was created for.”

Thousands of opposition fighters, along with tens of thousands of civilians, are still in Douma. The rebels agreed to surrender the town to government forces after the suspected gas attack, and have been evacuating in batches to rebel-held areas in the north. Russian military police have since entered parts of the town.

Asked in Berlin about the Russian proposal that OPCW experts visit Douma, German Chancellor Angela Merkel responded unenthusiastically, saying that “the evidence that chemical weapons were used there is very, very clear.”

The Britain-based Syrian Observatory for Human Rights said that Syrian government troops were on a 72-hour alert and were fortifying their positions. The Observatory’s chief, Rami Abdurrahman, said the alert includes all army positions and bases from the southern province of Sweida all the way to Aleppo province in the north, the Mediterranean coast in the west to Deir el-Zour province in the east, along the Iraqi border.

The Sound and Picture Organization, an activist collective in eastern Syria, said that Iranian fighters and members of Lebanon’s Hezbollah group had evacuated their positions in the Boukamal area, near the Iraqi border, which was recently retaken from the Islamic State group.

UNITED NATIONS/BEIRUT (Reuters) – Russia and the United States tangled on Tuesday at the U.N. Security Council over Syria as they blocked attempts by each other to set up international investigations into chemical weapons attacks in the war-ravaged country.

The United States and other Western powers are considering taking military action over a suspected poison gas attack on Saturday on a rebel-held Syrian town that long had held out against President Bashar al-Assad’s forces.

Russia vetoed a U.S.-drafted resolution to create a new inquiry to ascertain blame for such attacks. The United States and other countries then blocked a rival Russian bid to set up a different probe that would require the Security Council to attribute responsibility. CAREERS: How to increase your attention span

Want create site? Find Free WordPress Themes and plugins. PRODUCTIVITY This is how to increaseRead More