The White Helmets, a group of rescuers operating in opposition-held areas in Syria, said on Saturday that most of the fatalities were women and children.

“Seventy people suffocated to death and hundreds are still suffocating,” Raed al-Saleh, head of the White Helmets, told Al Jazeera, adding that the death toll was expected to rise as many people were in critical condition.

Al-Saleh said that chlorine gas and an unidentified but stronger gas were dropped on Douma.

“White Helmet volunteers are trying to help the people but all that we can do is evacuate them to another area by foot because most of the vehicles and centres went out of service.”

One member of White Helmets told Al Jazeera that an entire family had suffocated to death as they hid in their cellar, trying to seek shelter from air raids and barrel bombs.

The US government has warned of a global response against Syria if reports of the chemical attack are confirmed.

The Syrian government, however, is calling it a fabrication, dismissing talk of the Syrian army using poisonous gas as “farcical”.
‘Much of the city is destroyed’

On Sunday, pro-Syrian opposition Orient television reported that negotiations to reach a final agreement over Douma were underway between the Jaish al-Islam rebel group and the Russians.

There was no immediate comment from Jaish al-Islam, which controls the city, the last remaining under rebel control in Eastern Ghouta.

Pro-government forces and their allies on Friday launched a fierce air and ground offensive on Douma.

Syria’s state news agency SANA said the heavy bombardment, which shattered 10 days of calm, was in response to shelling by Jaish al-Islam on residential areas in Damascus.

“Douma has been subject to intense air strikes and much of the city is destroyed,” Moayed al-Dayrani, a resident of Douma and medical volunteer, told Al Jazeera, adding that doctors were struggling to reach all the victims.

“We are currently dealing with more than 1,000 cases of people struggling to breathe after the chlorine barrel bomb was dropped on the city. The number of dead will probably rise even further.”

The Douma Media Centre, a pro-opposition group, posted images on social media of people being treated by medics, and of what appeared to be dead bodies, including many women and children.

Rescue workers also posted videos of people appearing to show symptoms consistent with a gas attack. Some appeared to have white foam around their mouths and noses.

Symptoms of a chlorine attack include coughing, dyspnea, intensive irritation of the mucous membrane and difficulty in breathing.
Limited medical help

Ahmad Tarakji, president of the Syrian American Medical Association, said that there “are only a few physicians and medical staff [still] in Douma to treat the high number of casualties”.

Speaking to Al Jazeera from Fresno, in the US state of California, Tarakji said that many families currently in Douma are taking shelter in basements to protect themselves from barrel bombs and shelling.

In recent years, the Syrian government has been accused of using chemical weapons as a tool against the armed opposition, an allegation it denies.
‘100,000 trapped’

Rebels in Eastern Ghouta had managed to keep Syrian military forces at bay during years of war, but a four-year government siege of the district has led to a humanitarian crisiswith severe shortages of food and medicine.

Last week, two rebel groups reached evacuation deals with the Russian army, which resulted in about 19,000 people leaving for the northern province of Idlib.

They included fighters from the Faylaq al-Rahman and Ahrar al-Sham rebel groups, their families and other residents.

Rebel groups argued that the evacuation amounts to forced displacement, but gave in after weeks of intense bombardment.

Hanan Halimah, a former Douma resident, told Al Jazeera that more than 100,000 civilians were still trapped and unlikely to receive any assistance as the city had suffered devastating damage during the latest government assault. 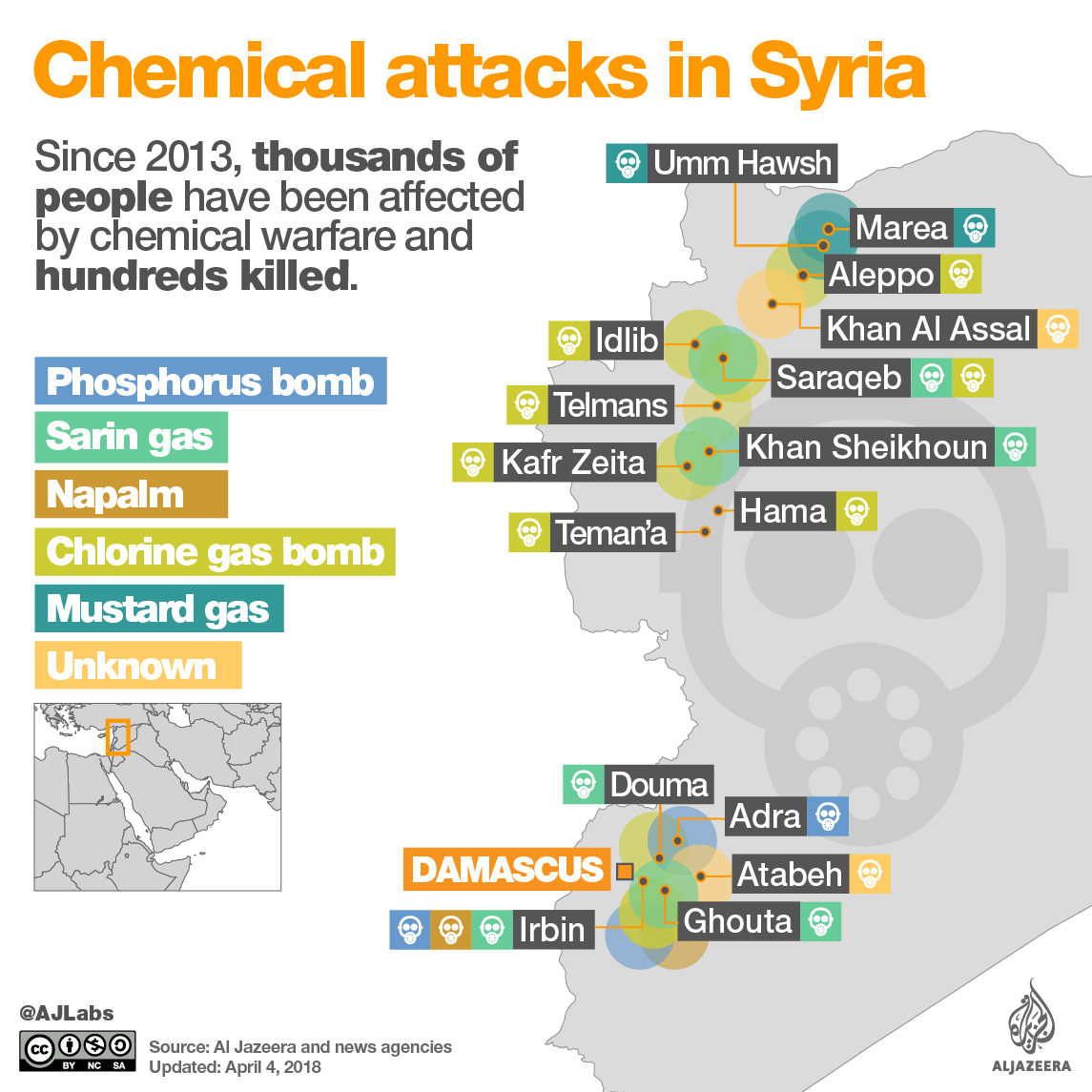