THE GUARDIAN – Maurizio Sarri is set to be confirmed as Chelsea’s new head coach after Antonio Conte was finally relieved of his duties after two increasingly fractious years in charge.

Conte, who claimed the Premier League title and an FA Cup in his two seasons at the club, had been anticipating the axe to fall all summer but, with Chelsea’s negotiations over the compensation due to Napoli to secure Sarri having proved complicated, he had returned to his office at Cobham last weekend. The Italian even took training on Thursday morning before, with the players sent home for the afternoon, confirmation came of his sacking. 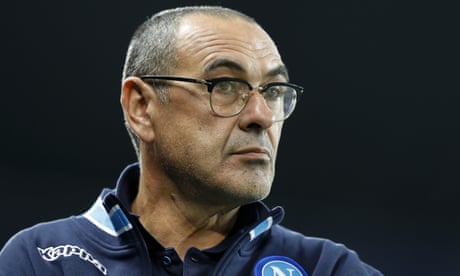 Chelsea have yet to comment but it is understood Conte said his farewells to his players on Thursday lunchtime after training.

He had a year to run on a £9m-a-season deal, renegotiated last summer in the wake of the league championship triumph, and will be due a hefty payoff. Conte is likely to take a sabbatical while he considers his next move. It remains to be seen whether Chelsea can strike an agreement to compensate the 48-year-old across the remainder of his deal, though that is unlikely to be easy.

Relations between Conte and the Chelsea hierarchy had always been difficult but deteriorated markedly over a difficult second season with regular disagreements over transfer policy. The Italian wanted greater say over recruitment, and would have sought a radical overhaul of the playing squad this summer following last term’s disappointing fifth-place finish. Players such as David Luiz and Willian would have been moved on, though Chelsea were also concerned Eden Hazard might opt against signing a new long-term contract while Conte remained at the helm.Sign up for The Fiver, our daily football email.

Sarri, who led Napoli to second place in Serie A last season, is expected to be confirmed as Conte’s replacement imminently, with progress having been made between his lawyers and those representing Napoli and Chelsea in the last 48 hours. He had been replaced in Naples by Carlo Ancelotti but not released from his contract, forcing the London club to pay a fee to secure him. Chelsea are likely to pay around £50m, with further fees due in bonuses, to secure the Italy midfielder Jorginho and Sarri.

Jorginho’s arrival will belatedly kickstart the club’s summer transfer business, with Daniele Rugani and Aleksandr Golovin to follow from Juventus and CSKA Moscow respectively. Thibaut Courtois is expected to depart having entered the final year of his contract, forcing Chelsea to consider a move for Roma’s Brazil goalkeeper Alisson.

Gianfranco Zola is expected to be given a role to work alongside Sarri in some capacity. —— AUTO – GENERATED; Published (Halifax Canada Time AST) on: July 12, 2018 at 12:58PM

Did you find apk for android? You can find new Free Android Games and apps.
Sharing is caring:
Sports Sports Comments Off on SPORTS: Chelsea sacks Antonio Conte, replaces him with Maurizio Sarri Print this News

Next year’s African Cup of Nations postponed to 2022