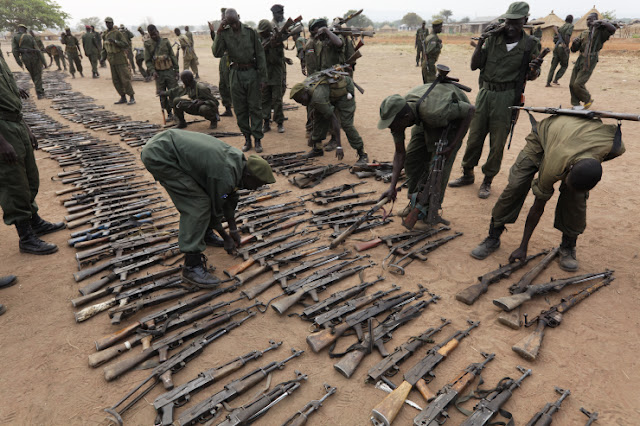 Is the U.N.’s New Arms Embargo on South Sudan Too Little Too Late?

South Sudan wasn’t always a war zone. When it achieved independence from Sudan in 2011, the new nation was lauded as a beacon of hope, a testament to a decadeslong struggle for freedom, midwifed with the blessing of the U.S. and other world leaders. But that idealism was dashed two years later, when the nation plunged into civil war. The war has since killed tens of thousands and caused millions more to flee the country. Now, five years into the conflict, the U.N. has done what many wanted at the outset—impose an arms embargo. But questions remain about how effective the measure will be.

The war has pitted forces loyal to President Salva Kiir against those loyal to former Vice President Riek Machar, both former military commanders involved in the Second Sudanese Civil War. Although Kiir and Machar have used ethnic appeals to mobilize their forces—they hail from the country’s Dinka and Nuer ethnic groups, respectively—the conflict has more to do with political and economic disparities heightened by weak institutions and self-interested leaders. In five years, the war has turned the oil-rich nation into a battleground, marred by mass murder, rape, and the recruitment of child soldiers. It has produced Africa’s largest refugee crisis since the Rwandan genocide, with nearly 2.5 million South Sudanese fleeing to neighboring countries and hundreds of thousands internally displaced.

Human rights groups have called the embargo long-overdue. “We wish actually that it had come earlier,” said Joan Nyanyuki, a regional director at Amnesty International, “because of the extent and the protracted nature of the conflict and the effect that it has on human rights violations.”

South Sudan is awash in guns. And it’s not just government and opposition forces in possession of weapons. Dozens of armed groups operate throughout the country, ranging from civilian militias to rogue factions of the national army. Nearly 600,000 small arms—such as rifles, pistols and AK-47s—were in the hands of civilians in 2016, according to Khristopher Carlson of Small Arms Survey, who monitors weapons flows to Sudan and South Sudan. Many of the small arms are Chinese and Israeli weapons, said Carlson. But it’s often unclear how the guns reach the country, how long they’ve been there, and who pockets the money. (The manufacturing country may not have sold directly to South Sudan.) One thing is clear: The weapons must pass through neighboring countries to reach the landlocked nation.

So the embargo depends heavily—if not completely—on the cooperation and ability of neighboring countries to monitor their borders. That includes Uganda and Sudan, which have long used South Sudan as a battleground for a proxy war, and the Democratic Republic of the Congo, whose border with South Sudan is porous.

“The AU has got to play a critical role,” said Scopas Poggo, a professor at Ohio State University. “Because we know that internationally, when an arms embargo is imposed, people try to find loopholes. They try to find ways to go around it.”

The African Union was involved in South Sudan’s independence, creating a panel to monitor the referendum vote and facilitate negotiations with Khartoum. But its response to the war has been less muscular than some South Sudanese had hoped. The AU has threatened sanctionsbut has yet to impose any.

The embargo hurts Kiir’s government, which has stockpiled sophisticated weapons, more than Machar’s opposition, which relies on the black market and is mostly limited to rifles. But high-tech weaponry isn’t necessary to wreak havoc.

“Raping women and burning villages and recruiting child soldiers—this is done by groups that are pretty weak and underfunded,” said Noel Stringham, a professor at Wheaton College. “So I’m not so sure that an arms embargo will limit those kinds of atrocities.”

Why the U.S. didn’t push for a U.N. arms embargo at the outset of the war, when it could have made a stronger statement, puzzles some experts. The idea was overruled by Obama’s National Security Adviser Susan Rice, a longtime South Sudan advocate. And it was made improbable by another factor: Uganda’s military intervention early in the war, when it sent troops to help the government push the opposition out of the capital city, Juba. The international community was “secretly grateful to the Ugandans” for coming to Kiir’s aid and wasn’t keen to impose an arms embargo that would prohibit Ugandan troops from continuing to provide military support to Juba, according to Alex de Waal, a professor at Tufts University who served on the AU High-Level Implementation Panel for Sudan.

Even if the U.S. had called for an embargo, there was no guarantee of passage in the Security Council. When the U.S. did eventually push for a U.N. arms embargo in 2016, the resolution failed to garner the nine votes needed to pass.

Now, five years into the conflict, the embargo comes at a delicate political moment: Kiir and Machar have been in peace talks since June over a controversial power-sharing agreement. The talks are expected to produce little more than a cease-fire—far from a guarantee of peace in a country that has seen multiple cease-fires fall apart, some within hours. South Sudan’s ambassador to the U.N. has argued that the embargo could derail the talks by emboldening the opposition to back away from a deal.

Meanwhile, the violence continues. A U.N. report released in early July found that government forces and allies had went on a violent rampage in the northern part of the country, killing at least 232 people and raping as many as 120 women and girls. And Kiir is clinging to power.
South Sudan’s parliament recently voted to extend his term until 2021.

“It’s hard to feel optimistic about much in South Sudan,” said Carlson. “I think that it’s really incumbent upon the leadership in South Sudan to make some changes. The embargo by itself won’t bring peace to South Sudan.” —— AUTO – GENERATED; Published (Halifax Canada Time AST) on: July 24, 2018 at 08:44PM

« Wikipedia article of the day for July 25, 2018 (Previous News)
(Next News) SOUTH SUDAN: Will the UN new arms embargo make any difference? »