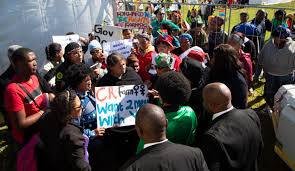 Day 4: MPs hear of rands and cents and (un)certainty in the expropriation debate

Minister of Women Bathabile Dlamini and Minister of Rural Development and Land Reform, Maite Nkoana-Mashabane, meet protesters outside the hall where President Cyril Ramaphosa gave his official Women’s Day address in Paarl. The President’s address was disrupted by protesters who called for him to sign a moratorium on farm evictions. 9 August 2018. Photo: Leila Dougan
1 Reaction

Banks invested R1.6-trillion in property and land in South Africa, and uncertainty would arise over those loans in case of expropriation without compensation, according to Cas Coovadia, Banking Association of South Africa (Basa) Managing Director. That’s because, legally, the owner of an expropriated property remained responsible for that loan on the bank’s debt book. On Friday as the public hearings on compensationless expropriation in Parliament turned towards rands and cents – and investors’ uncertainty.

Friday’s public hearings with the dark and grey-suited folks representing banks and business was a very different affair from the previous three days where passions and tempers ran high at times. The dry tones talking fiscal, financial and business certainty and consequences of uncertainty dominated.

Predictably, business and banks were not in favour of a constitutional amendment for expropriation without compensation. The broad-sweep argument of the Banking Association of South Africa (Basa), Business Unity South Africa (Busa) and Nedbank was that reform land and property ownership was crucial, but redressing inequality in land ownership did not need a constitutional amendment as the tools were already present in legislation and regulations even if these had not been fully implemented.

Basa Managing Director Cas Coovadia cautioned about “tinkering with the Constitution” without the political and economic will to do land reform. The impact of compensationless expropriation could be widespread.

Banks extended loans on the back of getting deposits, and property was a security for such loans. And total of R1.6-trillion of South African’s savings, salaries and investments are in loans for property and land, with R148-billion extended in rural areas. It was not immediately clear if this amount is separate or in addition to what Agbiz told MPs earlier in the week were the R197-billion in Land Bank loans to farmers, two-thirds of which had land as collateral.

“If I have a loan with the bank. There’s a security. If that security is taken away (through expropriation without compensation), I am still liable for that loan,” said Coovadia. “If people renege… because they no longer have the asset or they refuse, it creates issues.”

BUSA kept its presentation straight up and down and on point: the Constitution was the “bedrock” for business and investor certainty and there was nothing in the Constitution that was an obstacle to land reform, which was sorely needed. The uncertainty over the current constitutional review process has emerged in meetings with investors and others not only in South Africa but elsewhere.

It was Nedbank CEO Mike Brown, who put it bluntly to MPs. He just returned from an overseas investment road show, where South Africa’s expropriation without compensation debates was dominant in discussions. One of the challenges was that while it has emerged what it would be, including land grabs, what has not yet emerged was what it actually would entail. And that’s what the investment community needed to hear.

“I can assure you the uncertainty is already negatively impacting investment in our country…. The lack of clarity what that could mean was raised in every investor meeting.”

Nedbank was the only commercial bank that bothered to make a presentation as part of the public hearings on a constitutional amendment for land expropriation without compensation. And while ANC MP Madipoane Motapo asked why he made a “scary….. and also intimidatory” presentation, Brown replied it was not the intention.

“I believe it is incumbent upon me (as one of the big commercial bank’s CEOs) to point out the consequences of poorly implemented land reform, or expropriation… on the safety and security of our depositors’ money,” he replied, adding South Africa’s expropriation debated is reverberating internationally.

Nedbank has a residential property exposure of R153-billion and R162-billion in commercial property. With Nedbank holding only a 14% share of the mortgage market, it’s clear the other banks are more exposed and would be further impacted given as Basa indicated the total banking investment in land and property stood at R1.6-trillion.

Friday was the last day of the public hearings at Parliament, with selected organisations representing the financial sector, organised agriculture, academics, lawyers and civil society chosen from among the over 500,000 written presentations.

The majority of presentation in Parliament this week argued against a constitutional amendment, saying the Constitution was not an impediment and that, in any case, even if the Constitution was amended, a raft of laws was still required to provide the legislative and regulatory framework.

It was a roller-coaster week.

There was some shouting and posturing when Black First Land First (BLF) walked from the public hearings after making its submission that all land should be nationalised and retaken from white owners.

War was one of the undertakings made if traditional leaders were touched on their land. Communal land must not be subject to any expropriation, but instead, land should be transferred and registered to the traditional councils under traditional leaders, argued the National House of Traditional Leaders (NHTL). And there should be steps against community property associations (CPAs) because these were “detrimental” and “brought serious challenges to social cohesion…”

AfriForum presented a doom and gloom argument that the expropriation without compensation debate was for the “gratification the EFF and ANC get from hurting the middle classes”. According to AfriForum Deputy CEO Ernst Roets, there was none of the claimed hunger for land because the majority of restitution claimants had accepted payment and that white-owned land was acquired only in a few instances by conquest, but largely because it had been empty, as shown in the diaries of missionaries and Voortrekkers.

The views of the conservative Afrikaner lobby group, which is reaching out to the alt-right and right-wingers in the US and Europe, was criticised as “inaccurate”, “insulting” and “provocative” across the party political spectrum.

That AfriForum moment in E249 in Parliament on Thursday was a throw-back to moments in the public hearings when white speakers talked of defending themselves not only in dorpies like Beaufort West, but also in the last of the 34 countrywide hearings in Cape Town. Or as a white guy dressed in army khaki coat said: “For those who threaten us with war, there are no winners in war. I am a veteran of war… I will defend my nation to death…”

Those moments – and they were just brief moments – stood in stark contrast to the agreement on the necessity for land reform that emerged in days of public hearings, both this week at Parliament and also the 34 public hearings across South Africa.

But the difference arises in exactly how to do that.

In Parliament this week, the emphasis was on succinct legislation, firm government implementation and consistency. In contrast, the 34 public hearings from Limpopo to the Western Cape strongly supported expropriation without compensation – key to addressing lingering inequality and poverty.

And while both the EFF and ANC have endorsed a constitutional amendment, it’ll be up to MPs of the constitutional review committee by end of September to chart the way forward.