SOMALIA: For once, Mogadishu can watch World Cup with little fear – MAYBE UPDF HELD OFF THIS TIME! FILE – A mural depicting a soccer player is seen on a wall of a stadium in the Hodan district of Mogadishu, Somalia, June 13, 2017.

For Once, Mogadishu Can Watch World Cup With Little Fear

VOA – For years, residents of Mogadishu wanting to watch the World Cup on TV have done so at risk to life and limb. Islamist militant group al-Shabab — an opponent of both sports and entertainment in general — threatened violence against anyone watching the games.

The danger was especially high in 2010, when al-Shabab fighters controlled most of the Somali capital and gangs of Islamists patrolled the city, searching for anyone trying view the games in secret.

“The lucky few, who could watch in the government-controlled areas at the time, did so having one eye on the TV and the other on the door, with the sound turned down,” said Ahmed Aden, a 20-year-old Mogadishu resident.

The 2018 World Cup has been different. The tournament is still young, but there have been no reported attacks on Somalis watching the games on TV, either in public or private. Residents of Somalia’s capital have been gathering to watch the World Cup on big screens inside hotels, restaurants, and government centers.

While watching a match between Australia and Denmark with dozens of young men in a Mogadishu restaurant, Somalia’s Security Ministry spokesman Abdiaziz Hildhiban said the change is due to improved security and a greater willingness of people to ignore what he termed the “terrorists’ psychological war.”

“For Mogadishu residents, this year is different from the previous years because for the first time in many years, they can freely watch the World Cup in groups with no direct threat from al-Shabab,” said Hildhiban.”No more physical and psychological war can threaten our youth from enjoying sports.”

Al-Shabab contends that sports are un-Islamic and a waste of time, and that they turn young men away from the group’s raison d’etre, jihad.

Al-Shabab fighters shot to death two people watching a World Cup match in a cinema in 2006, and killed more than 70 when it bombed two World Cup parties in Uganda’s capital in 2010. 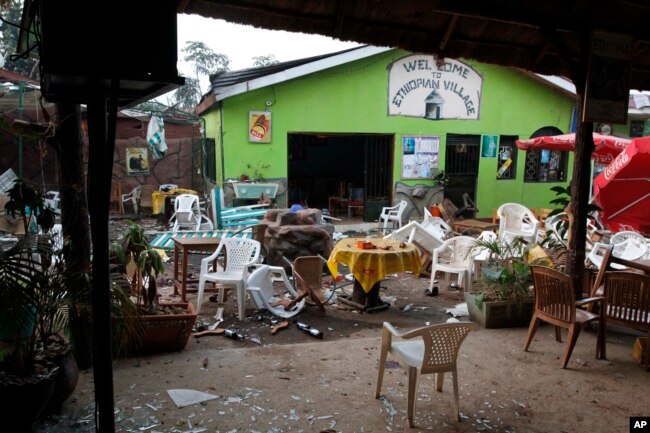 FILE – Damaged chairs and tables lie among the debris strewn after a bomb attack outside an Ethiopian restaurant in Kampala, Uganda, July 12, 2010.

Somalis wishing to watch the Cup were exposed to such violence because few individuals could afford satellite TV in Mogadishu, meaning public screenings were often the only way matches could be seen.

However, an increased presence of Somali government soldiers and African Union peacekeepers, along with private guards at many viewing sites, has made Somalis feel safer about enjoying the World Cup in public.

“In 2014, such crowds of soccer watchers could be an easy target for terrorist attacks, but now it comes after the first Ramadan without a single terrorist major attack in the city for years due to the security we beefed up,” Hildhiban said.

The threat of attack has not entirely receded.In April, at least five people were killed and 10 others injured after a bomb was detonated during a soccer game in Somalia’s port city of Barawe, a former al-Shabab stronghold.In Mogadishu, al-Shabab has bombed and/or shot up more than 20 hotels and restaurants in the last five years, killing hundreds.

But it is becoming harder for football-haters to keep Somalis away from the country’s favorite sport.High-speed internet and satellite TV have taken off in the past few years, allowing more people to watch games from the privacy of their homes.

Did you find apk for android? You can find new Free Android Games and apps.
Sharing is caring:
TERROR, world cup, mogadishu Sports, Somalia Comments Off on SOMALIA: For once, Mogadishu can watch World Cup with little fear – MAYBE UPDF HELD OFF THIS TIME! Print this News

Want create site? Find Free WordPress Themes and plugins. Before you all from SHITHOLE countriesRead More