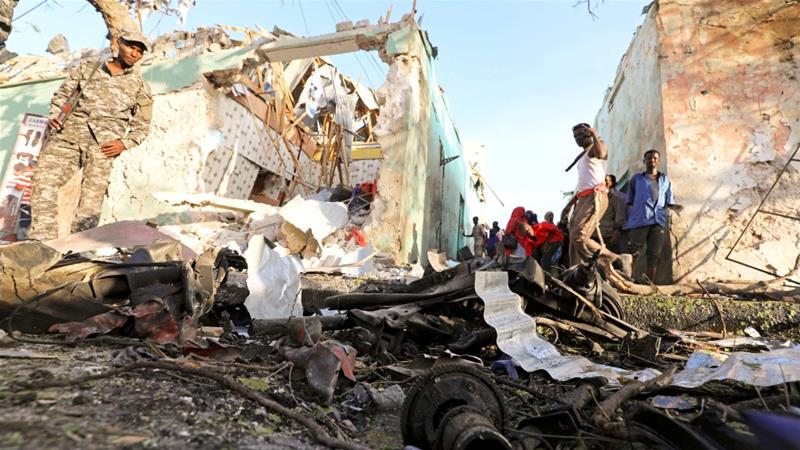 At least 14 people have been killed in a car bomb blast outside a popular hotel in Somalia’s capital, Mogadishu, according to a government official.

The explosion on Thursday happened near Weheliye hotel on the busy Maka Al-Mukarrama Road.

A spokesman for the Somali interior ministry confirmed the death toll to Al Jazeera, adding that 10 others were wounded in the blast.

Witnesses at the scene said the powerful blast struck a street filled with civilians.

“Most of the casualties are … people who were spending time to take tea, there was devastation and buildings were damaged,” Mohamednur Abdirahman told AFP News Agency.

“The blast was so huge, a vehicle containing explosives went off near a teashop in front of Weheliye hotel, leaving more than 10 people dead. I saw people being rushed to hospital and some of them were already dead,” another witness, Abdulahi Moalim, told AFP.

Al-Shabab, which is fighting to overthrow Somalia’s internationally recognised government, is frequently carrying out attacks in and around the capital.

The east African country continues to grapple with a delicate security situation. An African Union Mission to Somalia (known as AMISOL) is expected to withdraw its last troops by 2020.

Thursday’s attack comes about a month after a twin car bombing in Mogadishu left 38 people killed. UGANDA tops arms race in EAC as neighbours slash back