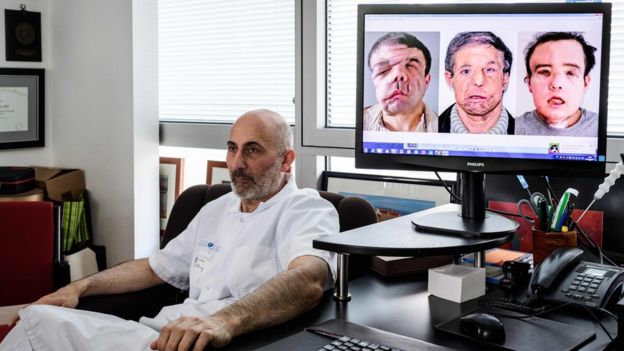 The first person in the world to receive two facial transplants says he is feeling well, three months after his latest groundbreaking operation.

Jérôme Hamon had his first transplanted face removed last year after signs of rejection following a treatment with an incompatible antibiotic during a cold.

The 43 year old remained in a hospital in Paris without a face for two months while a compatible donor was sought.

He said: “The first [face] I accepted immediately. This time it’s the same.”

His first transplant, in 2010, was a success, but he caught a common cold in 2015 and was given antibiotics. The drug was incompatible with the immunosuppressive treatment he was having to prevent a rejection of the transplanted material.

The first signs of rejection came in 2016 and last November, the face, suffering from necrosis, had to be removed.
What’s it like living with a face transplant?
How to build a whole new face

Mr Hamon lived without a face in a room at Georges-Pompidou hospital in Paris without being able to see, speak or hear until January, when a face donor was found and the second transplant carried out.

To avoid further rejection, Mr Hamon – dubbed “the man with three faces” by French media – had special treatment to clean the blood prior to the transplant.
‘It’s good’

His new face remains smooth and motionless, and his skull, skin and features are yet to be fully aligned. But he is positive about his recovery.

“If I hadn’t accepted this new face it would have been terrible. It’s a question of identity… But here we are, it’s good, it’s me,” he told AFP news agency from the hospital, where he is still recovering.


The hours-long operation was led by Prof Laurent Lantieri, a specialist in hand and face transplants who carried out Mr Hamon’s initial surgery eight years ago.

“Today, we know that a double transplant is feasible, it’s no longer in the field of research,” he told Le Parisien newspaper (in French).

Anaesthetist Bernard Cholley said: “Anyone who loses their face and then has to wait for a hypothetical transplant for an unknown length of time – that’s something that no-one has ever had to go through here.

“I’m amazed by the courage of a patient who has been able to get through such an ordeal.”

The first face transplant was carried out in 2005 in northern France. Since then, some 40 operations have been performed around the world.