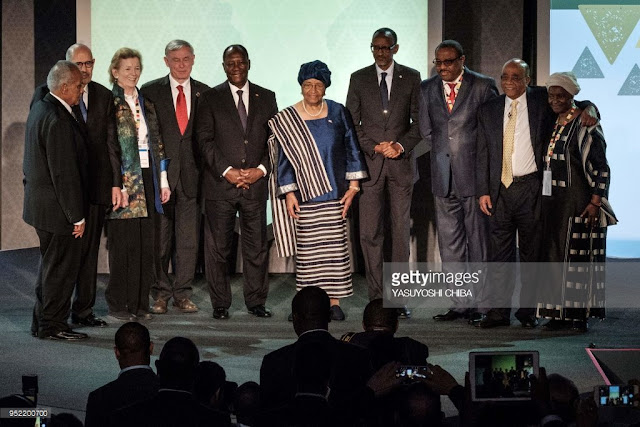 President Paul Kagame has said that leadership is both a privilege and a duty that is best measured in terms of concrete results that citizens can feel in their daily lives.

President Kagame was speaking Friday evening at the Mo Ibrahim Foundation Leadership Ceremony held in honour of former Liberian President Ellen Johnson Sirleaf for her role in her country’s recovery over her two terms in office.

At the event, Sirleaf, who was earlier this year replaced by former football star George Weah as Liberian president, was awarded the Ibrahim Prize Achievement in African Leadership.

The ceremony was part of the ongoing Ibrahim Governance Weekend that has drawn over 1000 delegates from across the continent and beyond.

In his welcoming remarks, President Kagame said that leadership is a duty best measured by results that citizens can experience in their day-to-day lives and the trust they have in their public institutions.

President Kagame, who is currently the Chairperson of the African Union, said that, during their time in office, leaders should endeavour to do the right thing for their citizens’ future, no matter the odds against them.

“During our time in office, we must work as hard as we can to do the right things for our people’s future no matter how difficult,” he said.

Congratulating Sirleaf, President Kagame commended her for leading her country out of a difficult period.

“I would like to congratulate Ellen Johnson Sirleaf for her selection as the 2017 Ibrahim Prize Laureate. The committee’s choice recognises her achievements in leading Liberia through a particularly consequential period of its history,” Kagame said.

The Head of State added: “We all share the conviction that accountable governance and service delivery are the core responsibilities of governments. Tonight is about underscoring that commitment.”

Sirleaf first became president in January 2006 before she was re-elected for a second term in 2011.

She came to power at a time when her country was just emerging from a civil war that had shattered the economy.

Reading the citation, Salim Ahmed Salim noted that Sirleaf worked tirelessly on behalf of the people of Liberia to lay a foundation for the future.

“Ellen Johnson Sirleaf took the helm of Liberia when it was completely destroyed by civil war and led a process of reconciliation that focused on building a nation and its democratic institutions,” he read.

In her acceptance speech, Sirleaf said she hoped that being the first woman to receive this annual award would inspire African women and girls to do more. —— AUTO – GENERATED; Published (Halifax Canada Time AST) on: April 29, 2018 at 04:45PM

Did you find apk for android? You can find new Free Android Games and apps.
Sharing is caring:
world news, rwanda World News, Rwanda No Comments » Print this News