RUSSIA: Putin mulling over revenge on diplomat expulsions by the West 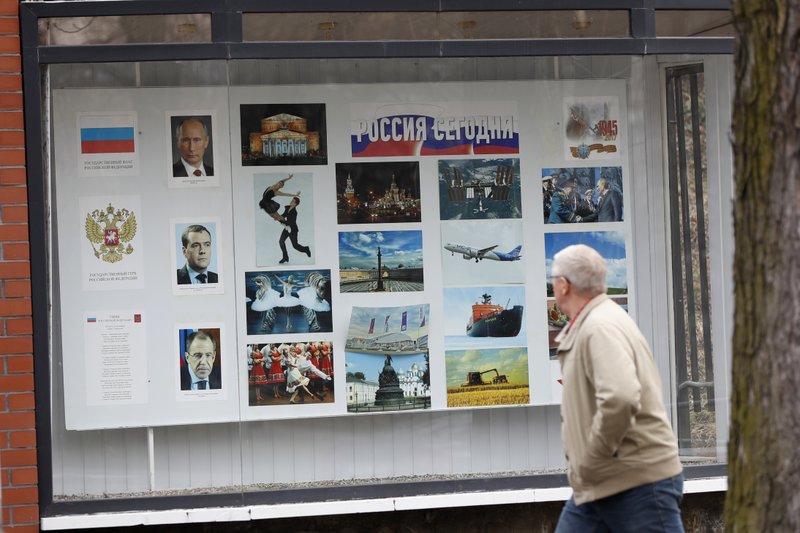 The Latest: Kremlin: Putin to decide on expulsions response

WARSAW, Poland (AP) — The Latest on the diplomatic fallout over the nerve agent attack on an ex-Russian spy in Britain (all times local):5 p.m.

The Kremlin says Russia will likely respond quid pro quo to the expulsions of Russian diplomats by the United States and the European Union nations over the poisoning of an ex-Russian spy in Britain.

President Vladimir Putin’s spokesman, Dmitry Peskov, said in remarks carried by Russian news agencies that Moscow will proceed from the “principle of reciprocity” while mulling over its response to the decisions made by Washington and EU countries.

Peskov said that the Foreign Ministry will analyze the situation and present a proposal to Putin, who will make the ultimate decision on how to respond.

Britain has accused Russia of involvement in the March 4 poisoning of former Russian spy Serge Skripal and his daughter who have remained in critical condition, accusations that Moscow has fiercely denied.

Russia’s ambassador to the U.S. says Washington’s decision to expel 60 Russian diplomats over the poisoning of an ex-Russian spy in Britain is destroying what is left of Russia-U.S. ties.

Anatoly Antonov denounced the U.S. move as ill-considered and provocative and said in remarks carried by Russian news agencies that Moscow will make an “adequate” response.

He said Monday that the U.S. is “ruining what is left of Russian-U.S. ties,” adding that Washington will bear responsibility for the consequences.

Britain has blamed Russia for the March 4 poisoning of former Russian spy Sergei Skripal and his daughter, accusations Moscow has fiercely denied.

In a show of solidarity with Britain, the U.S. and the EU have announced expulsions of Russian diplomats.

Boris Johnson calls the expulsions an “extraordinary international response by our allies” and show that “Russia cannot break international rules with impunity.”

Britain blames Russia for the March 4 poisoning of former spy Sergei Skripal and his daughter. On Friday, the 28-nation European Union said it agreed that there is no other plausible explanation.

Russia and Britain have expelled 23 of each other’s diplomats over the incident, which has sparked a Cold War-style diplomatic crisis between Russia and the West.

Britain says the Russians it expelled were spies operating under diplomatic cover.

Russia’s Foreign Ministry is expressing its outrage over the expulsions of Russian diplomats by European Union and NATO members in solidarity with Britain, saying that Moscow will respond.

Britain has accused Russia of involvement in the March 4 poisoning of former Russian spy Serge Skripal and his daughter, accusations that Moscow has denied. The United States and many EU nations have announced that they are expelling Russian diplomats.

The Russian Foreign Ministry reaffirms in Monday’s statement that the British accusations are unfounded. It adds that the allies of Britain are “blindly following the principle of Euro-Atlantic solidarity in violation of common sense, norms of civilized international dialogue and international law.”

It says Russia will respond to the “unfriendly” move but doesn’t immediately say how.

Canada says it is expelling four Russian diplomats in solidarity with Britain.

Foreign Minister Chrystia Freeland says the nerve agent attack carried out on the soil of Canada’s close ally is despicable and potentially endangered the lives of hundreds of people.

The four being expelled have been identified as intelligence officers or individuals who have used their diplomatic status to “undermine Canada’s security or interfere in our democracy.” They are at the embassy in Ottawa and the consulate in Montreal.

Meanwhile, Romania’s foreign ministry says it is expelling one Russian diplomat, calling the poisoning of former spy Sergei Skripal “a threat to collective security and international law.” The ministry says it agrees with Britain’s assessment that Russia likely was responsible for the attack.

A senior Russian lawmaker says Moscow must respond in kind to the expulsions of Russian diplomats ordered by the United States and the European Union over the poisoning of a former Russian spy in Britain.

Konstantin Kosachev, the chairman of the foreign affairs committee in the upper house of parliament, says on Facebook that Russia must respond proportionately.

He denounces the wave of expulsions as a “dirty and mean game that has no precedent.”

Britain has blamed Russia for the March 4 poisoning of former Russian spy Sergei Skripal and his daughter, accusations Russia has fiercely denied.

In a show of solidarity with Britain, the United States now says it is kicking out 60 Russian diplomats, while many EU nations also are announcing similar expulsions.

A European Union official says 14 member nations have expelled a total of more than 30 Russian officials over the nerve agent attack on an ex-spy in Britain.

The official spoke on condition of anonymity because the process hasn’t been completed yet.

EU governments and the White House on Monday made coordinated announcements to expel Russian diplomats from their countries to show solidarity with Britain over the poisoning, which Britain blames on Russia. Russia denies responsibility.

France announced it was expelling four Russian diplomats by next week. In a statement, the foreign ministry said the attack “represents a serious threat to our collective security and international law.”

Ukrainian President Petro Poroshenko says his nation is expelling 13 Russian diplomats, acting in sync with the U.S. and the EU nations.

Poroshenko says on Facebook that Ukraine is acting in the “spirit of solidarity” with its “British partners and trans-Atlantic allies.” The U.S. is kicking out 60 Russian diplomats, Germany and Poland said they have asked four Russian diplomats to leave and other EU nations have made similar moves.

Russia and Ukraine have been in a tug-of-war since Moscow’s 2014 annexation of Ukraine’s Crimean Peninsula and support for pro-Russia separatists in eastern Ukraine.

Poroshenko on Monday called for further “raising the price” for Moscow through financial and economic sanctions.

The White House says the expulsion of Russian diplomats and closure of the Russian consulate in Seattle will “make the United States safer.”

White House spokeswoman Sarah Huckabee Sanders says in a statement Monday President Donald Trump is responding to “Russia’s use of a military-grade chemical weapon on the soil of the United Kingdom.” She says the move will reduce “Russia’s ability to spy on Americans and to conduct covert operations that threaten America’s national security.”

The administration expelled 60 Russian diplomats and ordered Russia’s consulate in Seattle to close, as the United States and European nations sought to jointly punish Moscow for its alleged role in poisoning an ex-spy in Britain.

Sanders says the United States and allies want to send a message to Russia that “actions have consequences.”

Tusk said Monday that there may be additional measures including further expulsions in the coming days and weeks.

In coordinated announcements of expulsions on Monday, the Czech Republic said it is kicking out three staffers from the Russian embassy. Andrej Babis calls the measure an expression of solidarity with Britain.

The Netherlands said it is expelling two Russian intelligence officers, while Estonia said it was expelling the Russian defense attache. The Italian Foreign Ministry announced that Italy would expel two Russian diplomats assigned to the embassy within a week

Poland, Germany and Lithuania are among the European countries announcing they are expelling Russian diplomats over the poisoning of Russian ex-spy in Britain.

The German foreign ministry said in a statement that the move was part of a joint European response to the Skripal case.

It said “the expulsion of four diplomats is a strong signal of solidarity with Great Britain and signals the resolve of the Germany government not to leave attacks against our closest partners and allies unanswered.”

The ministry added that the move was also a response to the recent cyberattacks against German government networks, “which according to information so far is highly likely to be attributable to Russian sources.”

The United States is kicking out 60 Russian diplomats and ordering Russia’s consulate in Seattle to close in response to the poisoning of an ex-spy in Britain.

Senior Trump administration officials say the expelled Russians include 12 spies who the U.S. believes are working under diplomatic cover at Russia’s mission to the United Nations. They say the Seattle consulate is a counter-intelligence concern because of its proximity to a U.S. Navy base.

The officials say the actions are being taken to send a message about the “unacceptably high” number of Russian spies in the U.S. and to respond to the attack in the U.K. The officials weren’t authorized to be identified by name and requested anonymity.

The expelled Russians will have seven days to leave the U.S.

Lithuania’s foreign minister has strongly condemned the nerve agent attack on a former Russian spy in Britain, saying his country is poised to expel Russian diplomats in response.

Linas Linkevicius said Monday “We have to do the utmost to show … solidarity with our allies,” and to come up with “coordinated measures” as well as national measures.

He said the attack was the first time after World War II that military chemical weapons were used on NATO, EU territory against civilians, adding these “methods… are not acceptable.”

Asked whether the Baltic country would expel Russian diplomats, he said: “Lithuania will announce today national measures, including what you mentioned but not only that.”

Poland has summoned Russia’s ambassador for talks, and its foreign ministry is among several in Europe planning news conferences later Monday after EU chief Donald Tusk predicted that member states would introduce measures against Moscow over its suspected role in the spy poisoning case.

Ambassador Sergei Andreev said details will be released by the Polish side later in the day. Foreign ministries in Denmark, Estonia and other EU countries are expected to announce measures to reporters. In the U.S., the White House is also expected to make a statement.

Several EU countries said Friday they may follow Britain in expelling Russian diplomats in a deepening crisis over the nerve agent attack on an ex-Russian spy in England. Britain has blamed Russia, but Moscow denies responsibility.