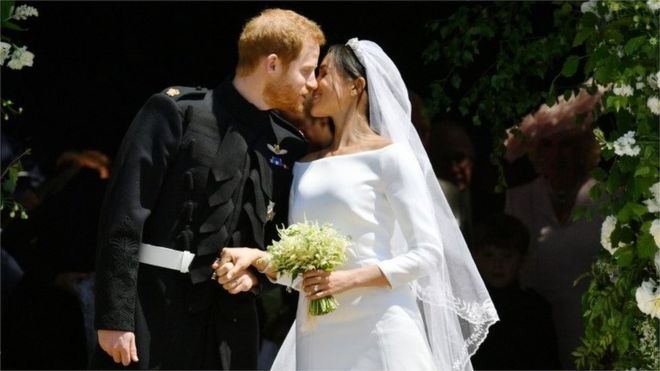 Prince Harry and Meghan Markle have been declared husband and wife, following a ceremony at Windsor Castle.
BBC – The couple exchanged vows and rings before the Queen and 600 guests at St George’s Chapel.
Wearing a dress by British designer Clare Waight Keller, Ms Markle was met by Prince Charles, who walked her down the aisle.
Following their marriage, the couple will be known as the Duke and Duchess of Sussex.
Among the guests were Oprah Winfrey, George and Amal Clooney, David and Victoria Beckham and Sir Elton John.
Ms Markle had 10 bridesmaids and pageboys – including Prince George and Princess Charlotte.
She wore Queen Mary’s diamond bandeau tiara, loaned to her by the Queen.
Her sculpted white dress was designed by Ms Waight Keller for French fashion house Givenchy.
The look was completed with a veil measuring 5m and embroidered with the flowers of each country in the Commonwealth.
Prince Charles walked Ms Markle down the aisle, after her father, Thomas, was unable to attend for health reasons.
In her vows, Ms Markle did not promise to “obey” her husband, while the prince broke with royal tradition by choosing to wear a wedding ring.
Prince Harry’s ring is a platinum band with a textured finish and Ms Markle’s has been made from a piece of Welsh gold.
Lady Jane Fellowes, the sister of Prince Harry’s late mother, Diana, Princess of Wales, gave a reading.
Karen Gibson and The Kingdom Choir performed Ben E King’s soul classic Stand By Me during the service.
As the bride and groom signed the register, 19-year-old cellist Sheku Kanneh-Mason – who won the 2016 BBC’s Young Musician – performed three pieces – by Faure, Schubert and Maria Theresia von Paradis, with musicians from the BBC National Orchestra of Wales, the English Chamber Orchestra and the Philharmonia.
The gospel choir also performed Etta James’ uplifting version of Amen/This Little Light of Mine as the newlyweds left the chapel.
The duke and duchess will travel through Windsor along a route lined by up to 100,000 well-wishers.
All 600 guests will then attend a lunchtime reception at St George’s Hall, which is being given by the Queen.
During this reception, Ms Markle will reportedly break with tradition for royal brides and make a speech.
Other celebrities in attendance included tennis star Serena Williams, TV personality James Corden, singer James Blunt, actor Carey Mulligan, and rugby star Jonny Wilkinson.
Prince Harry’s uncle, Earl Spencer, the Duchess of York, Sarah Ferguson, and the Duchess of Cambridge’s sister Pippa Middleton, were also invited.
Politicians, including Prime Minister Theresa May, were not invited, as it is not a state event.
But the former Prime Minister, Sir John Major, is among the invited guests, as he is a member of the Order of the Garter.
About 1,200 members of the public – many who are recognised for their charity work – have been invited into the grounds of Windsor Castle for the wedding.
Skip Twitter post by @theresa_may

My very best wishes to Prince Harry and Meghan Markle on their wedding day. To all of those joining the national celebration with street parties and other events, have a wonderful day. #RoyalWedding

This is a very different royal wedding.
It’s different because of the style of the arrangements for the day itself.
From small things, like the cake (not a traditional big heavy fruitcake covered with bullet-proof icing), to bigger things, like a gospel choir performing at the service.
To more remarkable decisions, like the invitation to 1,200 members of the public to enjoy the occasion in the grounds of Windsor Castle.
After the death in 1997 of Prince Harry’s mother, Diana, Princess of Wales, she was described by the-then Prime Minister Tony Blair as “the people’s princess”.
This may not be “the people’s wedding”, but it is about as close to it as any royal wedding has got.
Read more from Jonny Dymond
During the service, the couple pledged themselves to one another, saying: “For better, for worse, for richer, for poorer, in sickness and in health, to love and to cherish, till death us do part.”

The Most Rev Bishop Michael Curry, the 27th presiding bishop and primate of the Episcopal Church, from Chicago, gave an address, and the Rt Rev David Conner, Dean of Windsor, conducted the service.
“There’s power, power in love. If you don’t believe me think about a time when you first fell in love. The whole world seemed to centre around you and your beloved. Well… there’s power, power in love,” Bishop Curry said in his address.
On Saturday evening, the newlyweds will celebrate with 200 close friends and family at a private reception less than a mile from Windsor Castle at Frogmore House, hosted by Prince Charles.
The Royal Family will pay for the wedding, including the service, music, flowers and reception.

Did you find apk for android? You can find new Free Android Games and apps.
Sharing is caring:
world news, Gallery World News, Gallery No Comments » Print this News