REFUGEES: From Cameroon to US-Mexico border: ‘We saw corpses along the way’ 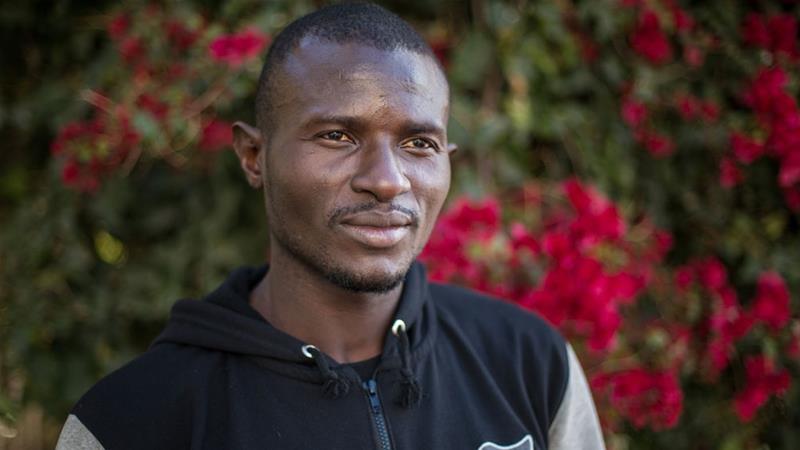 Kombo Yannick is one of the many African asylum seekers who are braving the longer Latin America route to the US.
AL JAZEERA – Tijuana, Mexico – Kombo Yannick, a 30-year-old pastor from Cameroon, waited in line with about 100 other asylum seekers at the US-Tijuana border on a chilly afternoon in late December.He and his wife had been in Tijuana for two days, and were speaking with an aid worker about where to find a bed for the night.

“My only goal is to find a way to cross the border,” Yannick said, rubbing his gloved hands together to keep warm.

“We don’t know exactly where we will go, we just have to wait,” he told Al Jazeera.

Yannick is one of the increasing number of African migrants and asylum seekers, as well as others from Asia and the Middle East, who have attempted to reach the US via Latin America over the last several years.

He and his wife stood in a group of Cameroonian asylum seekers. Next to them, were those from Eritrea, Pakistan, and central Mexico, each speaking their native languages, their voices drowned out by the sound of roaring traffic from the nearby highway overpass.

The line at the border can last for hours or even days, so many of those who wait camp out in tents, waiting for their turn for an interview with US Customs and Border Protection. 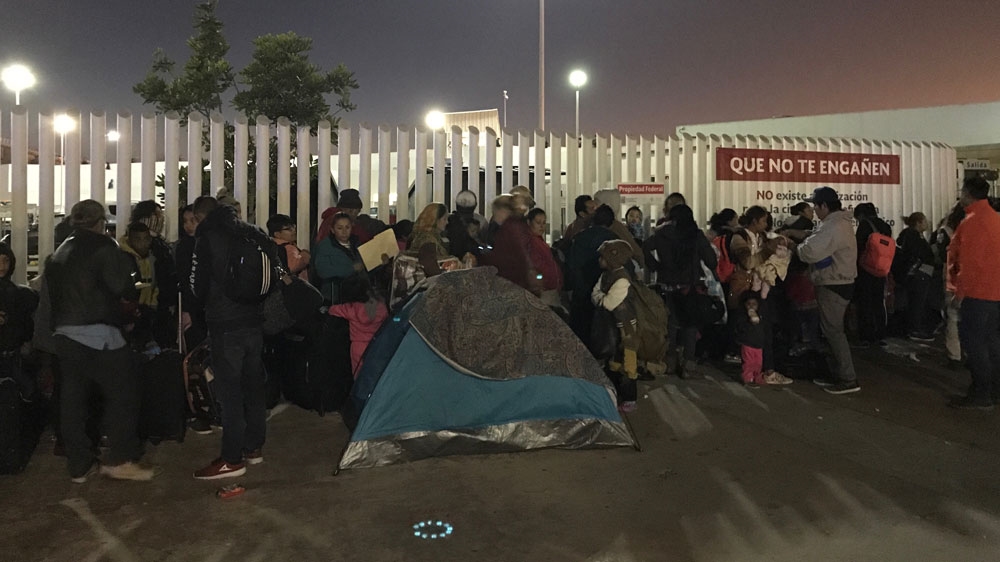 Refugees and migrants wait at the El Chaparral border crossing in Tijuana, hoping to enter the US [Walker Dawson/Al Jazeera]

Due to the danger involved in crossing the Mediterranean Sea from Libya to Europe, many people from African countries are instead choosing to seek asylum in the US, according to the United Nations High Commissioner for Refugees (UNHCR), which also attributes the trend to the overall rise in global migration.

Over the past several years, Mexico has seen a spike in asylum seekers from African countries, like Cameroon.

The number of Cameroonian asylum seekers to Mexico increased from 23 in 2016 to 105 in 2017, according to data provided to Al Jazeera from UNHCR.

The long reach of the US border

But, the number of Cameroonians who are granted asylum in the US has dropped steadily since 2007. According to UNHCR, this couldn’t be attributed to any particular change in policy.

Although the route from Africa to the US via Latin America is significantly longer and comes with risks, it is considered less dangerous than going by boat to Europe via the Mediterranean.

As of June 6, more than 780 people died while attempting to cross the Mediterranean Sea, en route to Europe, according to the International Organization for Migration.
Yannick’s journey: ‘We saw corpses along the way’

Yannick’s journey from Cameroon to Tijuana began in June 2017.

He and his wife took a series of busses across West Africa, travelling more than 3,000km from Cameroon to Senegal. From there they flew to Ecuador, which many African migrants use as an entry point into the Americas because of its easy visa requirements for African nationalities.

From Ecuador, they travelled north through Colombia to the Panamanian border. There, the most difficult part of their journey began.

“We saw corpses along the way,” said Yannick of their week-long trek through the Darien Gap, between Colombia and Panama.

“That’s where you see people giving up and saying they can’t continue.” 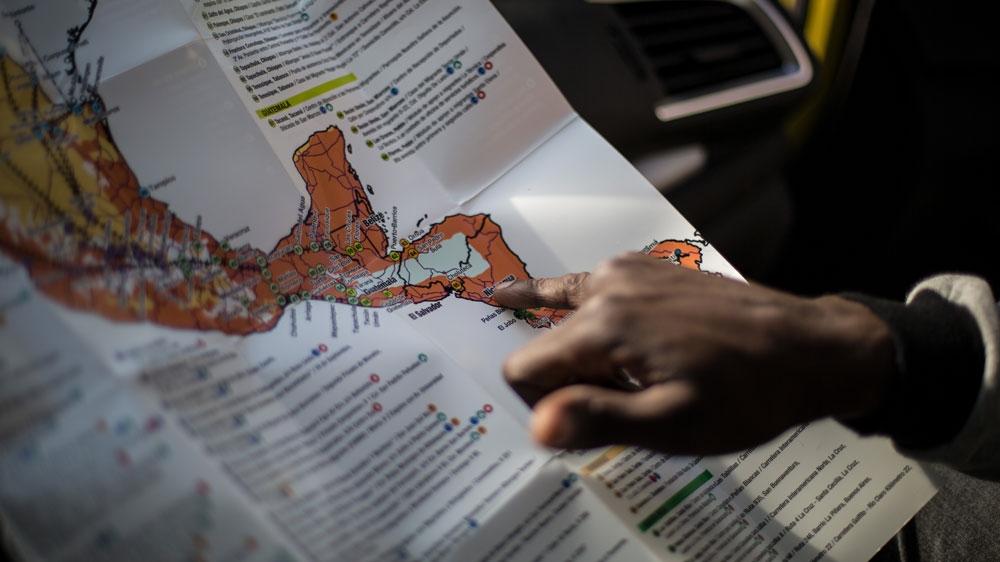 The Darien Gap is a lawless, roadless, wilderness where many Colombian rebel and neo-paramilitary groups roam freely.

A few days into the Darien Gap crossing, bandits stripped Yannick and subjected him to a search.

“They believe you can hide money anywhere. They harass you, they shoot guns in the air,” Yannick said.

Once the couple arrived in Panama, Yannick got sick in an immigration camp where he and his wife and numerous other migrants and refugees from India and Africa were held.

“I was really sick,” Yannick said of the illness he contracted.

“My family thought I would even die.”

READ MORE
600 Africans stranded after traveling to Costa RicaImmigration laws and enforcement in Latin America are typically lax, often granting migrants and refugees passes to cross on to the next country.

However, Costa Rica passed immigration legislation in 2005, intending to stop those coming from Nicaragua.

In Nicaragua, Yannick was robbed again, having $1,200 and his phone taken.

He and his wife were then detained by Nicaraguan immigration officials and deported back to Costa Rica.

From there, Yannick paid a truck driver $800 to smuggle him and his wife from the Costa Rican border across Nicaragua to Honduras. Yannick and his wife spent about $10,000 in all, on their trip to reach the US.

From Honduras, Yannick and his wife went by bus, through El Salvador and Guatemala, to the southern border with Mexico.

When they arrived in the Mexican city of Tapachula, they were given a 20-day permit to cross the country.

From there, they flew to Tijuana.
‘They just kill you; that’s why I ran away’

Compared with other countries in central Africa, Cameroon has enjoyed relative stability.

However, recent conflict between protesters and government forces has erupted in the country’s English-speaking regions.

According to the UN, more than 20,000 Cameroonians have fled to Nigeria since the military cracked down on protesters in the Anglophone regions last year.

The recent wave of protests, which initially started in November 2016 as a movement against what those in the Anglophone regions called the marginalisation of English speakers, has since grown into calls for independence.

Last month, seven activists from the country’s Anglophone minority, including their leader, were convicted on charges related to rebellion and acts of “terrorism”.

Amnesty International has accused the government of rights violations – allegations the government denies. The human rights organisation also accuses armed separatists of attacking schools and teachers who are not participating in the protests.

Yannick said he doesn’t support protesters or the government.

“They don’t even lock you up,” he said, referring to government soldiers who accused him of being a protester before he decided to leave.

“They just kill you. That’s what happens. That’s why I ran away.”

Cameroonians are not the only Africans in Tijuana seeking asylum in the US.

Berhe* is a 30-year-old doctor who fled persecution from an authoritarian government in Eritrea.

He followed a similar path to Tijuana as Yannick.

“It has been 28 years the government is in power. It’s called transitional government … it has never been [transitioned] into a government,” Berhe told Al Jazeera.

In 2015, the UN estimated that people were fleeing Eritrea at a rate of about 5,000 people a month to escape what a United Nations Commission of Inquiry described as totalitarian practices by an administration that has been in power since 1993.

“People are getting arrested for nothing, there is no election, there is no democracy, and people are being persecuted for their political opinions,” Berhe said.

One major problem for Berhe was the country’s conscription service, which makes it compulsory for Eritreans to serve in the national service programme for an indefinite period of time. The UN defines this as forced labour.

“Once you are in there, you are not supposed to leave,” Berhe said.

According to Chris Boian, a spokesperson for UNHCR, the US has seen an increase in African asylum seekers taking the Latin American route.

“When you look at migration out of Africa towards the Americas, it’s really such a mixed flow of people. A lot of it really is driven by economics and looking for better income,” Boian told Al Jazeera.
The wait in the US

Yannick hopes he will be able to earn a higher salary in the US to support his family in Cameroon.

He and his wife crossed the US-Mexico border on Christmas day.

They spent a week in a detention centre in San Ysidro and were then transferred in the middle of the night in an unmarked plane to the D Ray James Correctional Institution in Folkston, Georgia, which serves as a processing centre for ICE detainees.
My eyes have seen people that are suffering.

While being held in the detention centre, Yannick was separated from his wife, and wasn’t allowed to make contact with the outside world.

After two months, he was released on bail.

Yannick will return to Folkston for his final court hearing sometime in the next few months.

His wife was recently released from detention.

“My eyes have seen people that are suffering,” Yannick said.

“My eyes have seen people dying. I feel like if I can’t do something for them, then nobody will.

Did you find apk for android? You can find new Free Android Games and apps.
Sharing is caring:
US, MEXICO, refugees, world news, cameroon, asylum, Migrants World News Comments Off on REFUGEES: From Cameroon to US-Mexico border: ‘We saw corpses along the way’ Print this News

CHINA: Blast near US Embassy in Beijing

TRUMP delays proposed Putin meeting until 2019 – WHO IS EVEN KEEPING TRACK OF THESE THINGS?