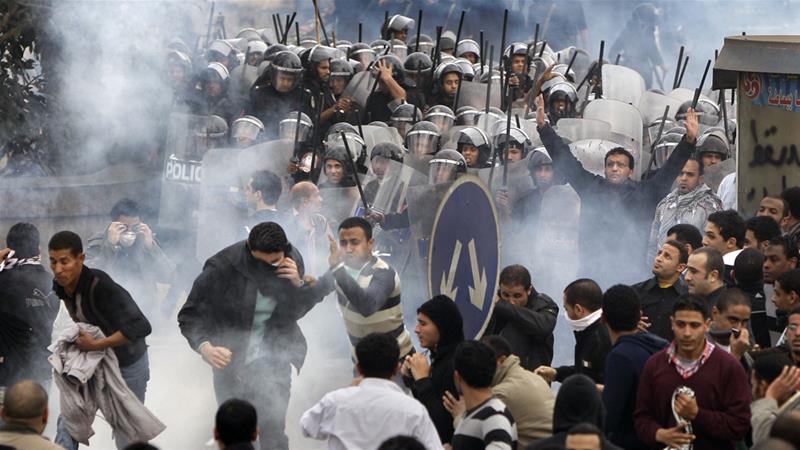 Doha, Qatar – Eight years after the so-called Arab Spring, the region is facing the prospect of another phase of revolts due to pressing financial, urbanisation and unemployment challenges, experts have argued.

Several Arab leaders were deposed in the aftermath of the popular 2010 and 2011 uprisings, while others’ grip on power was loosened.

Speaking during the 12th Al Jazeera Forum, held this weekend in Qatar’s capital, Doha, a number of regional experts said it is “inevitable” that change will come to a region with one of the world’s highest percentages of youth.

“Massive uncontrolled urbanisation, pressure on the job markets are among other socioeconomic factors the leading causes behind greater expectations of the youth in the Arab societies,” said Mohamed Mahjoub Haroon, professor of social science at the University of Khartoum, in Sudan.

Haroon identified market forces, economic stagnation and uncontrolled and unplanned urbanisation as the three main socioeconomic factors behind the Arab Spring that swept across several countries in the Middle East and North Africa.

He argued that as long as these issues persist, so will fissures and attempts to shake up the established ruling orders in Arab societies.

Speakers also identified the region’s “youthfulness” – about half of the Arab world’s estimated 400 million people is below 25 – as another key factor in any future development in the Arab world.

This, coupled with persisting grievances over lack of freedom and the rule of law in tightly-controlled societies, would lead to another phase of revolutions in Arab societies, other speakers at the Forum predicted.
Violent revolts?

In the 2011 Arab Spring, Arab societies revolted with mixed results against the regimes in Tunisia, Libya, Egypt, Syria, Yemen and Jordan.

While Tunisia avoided descending into conflict, the revolts in Syria, Libya and Yemen turned violent and spiralled into civil wars with regional and international interventions.

In Egypt, following elections in 2012, the military was able to regain its footing a year later, while Jordan’s monarchy was able to avoid a violent path by briefly bending to the Arab Spring storm until it safely passed.

Hmoud al-Olimat, a professor of sociology at the University of Qatar, agreed with Haroon that socioeconomic factors are leading the Arab region into the direction of another wave of revolts similar to the Arab spring – if not more violent.

Olimat drew a comparison between the 19th-century French revolutions that influenced other movements in Europe and elsewhere.

He also commented on the counter-revolutions in the region, led by conservative Arab monarchies that sought to consolidate more power and reverse progress in the aftermath of the Arab Spring.

Olimat argued, however, that once societies have broken the barrier of fear of a regime’s powers, history shows that revolutions will start again despite the pushback by the counter-revolutionary forces.

He said youth complaints about the absence of real development and the rule of law that in their countries will determine the future of the Arab world’s ruling orders.

« RWANDA: Leadership must impact people’s lives – Kagame (Previous News)
(Next News) FRANCE: Why did U.S. and its allies bomb Libya? »