PICTURES: Military land board – another Museveni tool for land grabbing 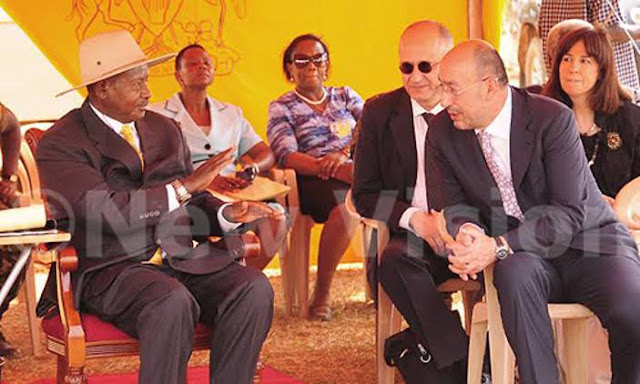 Immediately after taking over power in 1986 Museveni and his top NRA officials embarked on land grabbing.  The first casualty was the prime properties in Kampala and other urban areas in the country. Actually, the earliest disagreements amongst themselves arose from the sharing of these properties. After exhausting these properties in urban centres, they embarked on the vast government and privately owned land in the countryside. Initially it was land in the cattle corridor region of Buganda but with the coming on board of infrastructural projects like roads and oil, areas of Bunyoro, West Nile and Acholi have been targeted.  In Buganda, it is now very common to find whole parishes renamed according to the new owners i.e. at General, Brigadier, or Colonel so and so’s ranch.  In some cases, top regime cohorts use other people as fronts to acquire huge chunks of land.

In April 2005, Museveni put in place a Military Land Board (MLB) and appointed Gen. Joram Mugume Kanyaruhara as its Chairman and deputised by Col. Arthur Musinguzi.  This MLB became another tool for land grabbing on top of the Uganda Land Commission (ULC),  District Land Boards (DLB), the Aidah Nantaba Land Committee (LC), the Police Land Protection Unit (PLPU), the Gertrude Njuba State House Land Desk (SHLD), and others.  The army is one of the entities that hold big chunks of land. Above all, security forces have been at the center of land grabbing and under the cover of establishing security installations, Museveni has been able to grab land.

Earlier in 1990 the Ministry of Defence through the NEC bought a vast ranch from Hajji Sulaiman Kiwanuka of Kabulasoke in Gomba district.  Later on, Museveni just turned it into his personal property by renaming it Kisozi Ranch.

During the 1990s his young brother, Gen. Saleh was accused of using his company, Divinity Union to grab 40,000 acres of land for sugarcane growing in Northern Uganda.  He had a scheme of leaving people in IDP camps under the pretext of turning them into urban centres so that their land could be easily grabbed. In August 2001, the army brutally evicted people in Mubende to give way to a German investor in coffee on an 11 sq. km of land.

In April 2005 Gen. Jim Owoyesigyre of Air force grabbed 500 acres of land in Marya Sub County, Masindi after evicting 1,200 people.  He claimed to have bough it at 30M shillings.  During the same month, local residents of Ntooma village in Masindi district pounced on Lt. Geoffrey Taremwa of the then Presidential Guard Unit (PPU), tied him with ropes and beat him up after accusing him of being part of the group of soldiers who were up to grabbing their land.

In August 2006, West Nile district administration accused top army officers of grabbing land under the guise of setting up military camps to flush out alleged rebels.  In April 2007  Gen. Oketta’s troops clashed with those of a State House top Aide, Harriet Aber over 3,500 acres of land in Gulu. The two groups of soldiers had been harassing and torturing locals over the disputed land which neither party legally owned.

Earlier in 2006, Harriet Aber had illegally acquired 10,000 acres of land after which she used soldiers to forcefully evict people in 2007.  In October 2007 the then CDF, Gen. Aronda ordered officers at Kabamba Barracks to remove their pastoralist friends and relatives whom they had assisted to encroach on the Barracks land.  Around the same time, Uganda Land Alliance presented evidence of security officers in the army, ISO and Police siding with the nomadic pastrolists (Balaalo) in grabbing land. This is what later on prompted Museveni to deploy Gen. Ssejusa to diffuse the armed Balaalo issue.

Around 2008, the army in Arua Municipality evicted residents without compensation from land at Angafio a.k.a Israel Quarters.  Around August 2008, the then CDF while addressing the National Universities Guilders Presidents Council denied that army officers were involved in land grabbing but promised to arrest any of them who would be implicated. He urged the youth to support the then Land (Amendment) Bill.

In March 2009, the army ordered local residents to vacate their ancestral land at Natalya village in Entebbe.  During the same month, Air force personnel demolished a perimeter wall constructed by a private developer near Katabi barracks in Entebbe. The army simply ignored police summons over malicious damage to property.

In August 2009, the Army’s 409 Brigade in West Nile moved to grab a piece of land located between Arua district headquarters and the army barracks. The district council had allocated it to the Ministry of Lands for the construction of the district land office.  In August 2009, while addressing a stakeholders meeting at Nebbi, the Security Coordinator for oil exploration region, Col. David Kaboyo disclosed thus; “…..I have reliable information from some sources that some army officers are frequently grabbing people’s land in Amuru which lies in the oil belt.”

In the late 1990s the army took over a 6.3 acre piece of land belonging to Mulago Hospital and used it to house its military intelligence unit (CMI). In 2010 top army Generals sold the same land to property  Mongul, Shudir Ruparelia.

In 2011, at Namaswa village, Mubende district,  the army violently evicted over 20,000 local residents after burning to death an eight ear child from land the regime claimed to have leased to a foreign company, New Forest for pine and eucalyptus plantation.

In August 2011, Maj. Luciano Baluku Binobino forcefully grabbed Kasese District land near the airfield.  In April 2012 ISO’s Maj. Herbert Muramagi deployed truckloads of armed soldiers in Kisukuma Parish, Kigorobya Sub county, Hoima District to evict 80 families of local residents from their 1,205 hectare piece of land.  At that time, Maj. Muramagi was the Director of Maritime and was responsible for Security around Lake Albert. Like other top regime cadres, he rushed to acquire land in the oil rich Bunyoro for future prospects.

Around 2012 Gen. Moses Ali used the army backed by police and Game Rangers to violently evict 6,000 local residents from Apaa that had allegedly been leased to a South African investor.

In July 2012, the Army’s Luwero Industries and Nakasongola Complex evicted over 100 local residents of Kasenyi village in Lwampanga Sub-county in Nakasongola district from their 50 acres piece of land.

In August 2012, the army at Ssingo training School moved to expand by forcefully evicting local residents of Kapeeka from 300 acres without compensation.  In August 2012, the army violently evicted over 270 families from Bukuya, Mubende district to give way to gold mining, AUC Mining owned by Gertrude Njuba who heads the State House Land Desk as a front for more powerful regime officials.

In September 2012, the army moved to take over 100 acres of land from the Bukalasa Agriculture College in Luwero under the guise of constructing a military national referral.  Eastblished in 1922, Bukalasa has been doing research, training and overall development of the Agricultural sector.  Unfortunately, even Gen. Katumba Wamala who is a graduate of the same college was behind its land grabbing.

In late 2012, Gen. Tumwine grabbed and fenced off public land in Kyabahura in Kazo which Kiruhura District Council had reserved for developmental projects.

In September 2013, soldiers brutally evicted over 1000 local residents from land at Bunjako village, Buwama sub-county in Mpigi district and in October 2013,  Gen. Aronda threatened to revoke the licences of  civil society organisations operating in the oil producing areas after accusing them of sabotaging oil drilling.  This is because they were enlightening the locals on land rights.

In January 2014 the army’s 5th Division forcefully evicted local residents from land that formerly housed Acholi Pii Refugee camp.  In June 2014, Army officers were cited in an attempt to grab a portion of Mulago Hospital land.  In July 2015, the then Lands State Minister, Aida Nantaba disclosed that high ranking army officers and regime officials were behind the illegal evictions from land throughout the country.  During the same year, part of the 36 Sq Kms Kaweweta army school land (which formerly belonged to East Mengo Growers Cooperative Union) was given out to a Turkish investor.  She went further to disclose that the same people were plotting her downfall and indeed Museveni dropped her from cabinet.

Around 2015, a Kampala businessman, Geoffrey Karugira was used by powerful regime cohorts to acquire 420 acres of land before using armed soldiers to violently evict residents from Nabika village in Nakaseke district.  In July 2016, the army at Kimaka in Jinja was embroiled in a row with locals over attempts to grab titled land belonging to two 14 year old local schools in the neighborhood, St. Monica Secondary school and Guardian College.  In March 2015, Brig. Phenehas Keitirima was embroiled in a property scandal when he attempted to forcefully evict two local residents of Lyantonde Town Council from their property.

Around March 2017, during a consultation meeting at Nakaseke Town Hall, Maj. Kakooza Mutale accused MUSEVENI of backing “powerful in the army and government who are grabbing land from the powerless.”  He had been tasked by Museveni to investigate land grabbing in Bakaseke.

In March 2017, Gen. Angina helplessly ordered Capt Bashaija off the 32 hectares of land belonging to NARO in Mbarara.  In April 2017, Museveni ordered for the giving out of 50 acres of Mubende army barracks land to a Turkish investor for agro-processing.  In May 2017, local residents of Lungula and Got Apwoyo villages in Nwoya District were subjected to harassment and torture by soldiers before being violently evicted from their ancestral land by a State House top Aide, Harriet Aber and Gen. Charles Otema.

In June 2017, a one Milly Namutebi used armed soldiers under the command of Maj. Herbert Kigambwoha to violently evict 3,000 local people from 3 sq kms of land in the 16 villages of Butologo subcounty, Mubende district.

In July 2017, the army connived with private surveyors to cut out 200 acres from the 36 Sq miles of land allocated to Kaweweta barracks by Uganda Land Commission.  The cut out piece was shared by army officers and politicians in Nakaseke district.  In August 2017 a top army General was accused of grabbing land belonging to Aqua Coolers at Namanve Industrial Park.

The above list is just a tip of the iceberg.  Therefore, the army and security forces in general have been and continue to be at the forefront of land grabbing.  Both the individual top security chiefs and the regime use the institution of security forces as a means of dispossessing Ugandans of their land. 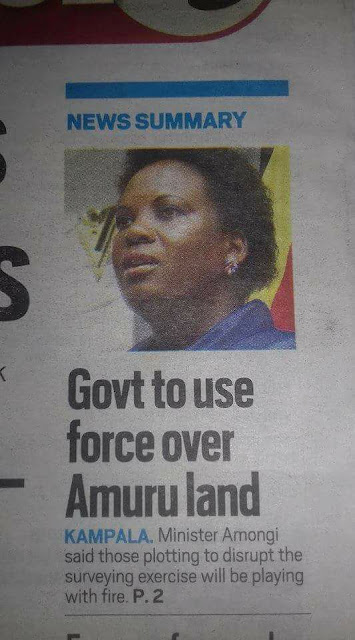 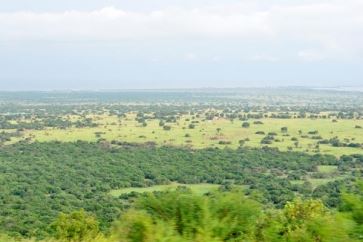 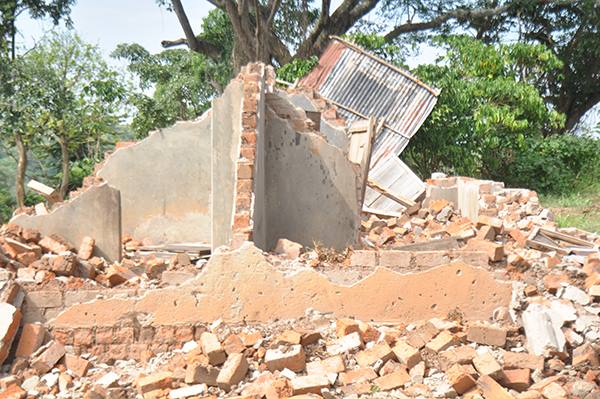 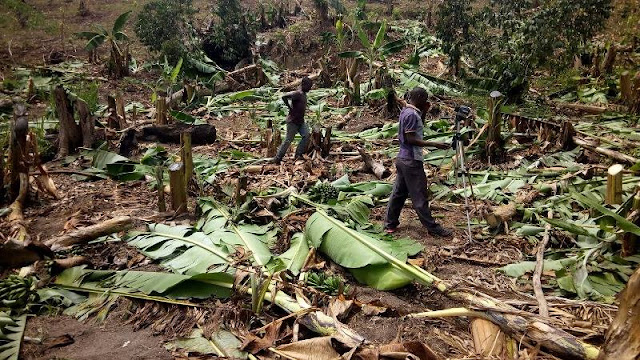 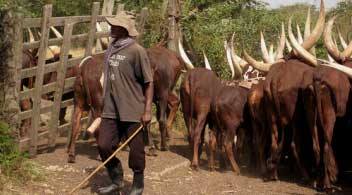 2 Comments to PICTURES: Military land board – another Museveni tool for land grabbing