OILPRICE.COM – The EIA forecasts that U.S. fossil fuel production will hit record levels in both 2018 and 2019, averaging 73 quadrillion BTUs and 75 quadrillion BTUs, respectively.
–    This surging level of energy production is largely the result of soaring oil and gas output.
–    Natural gas production is expected to jump to 80.4 Bcf/d in 2018, up 9 percent compared to last year, and crude oil output is expected to average 10.3 million barrels per day, an increase of 10 percent from 2017 levels.

–    Plains All American Pipeline (NYSE: PAA) said it had received enough commitments to move forward with its Cactus II pipeline, which will carry crude from the Permian to Corpus Christi. The pipeline will expand the existing network’s capacity from 390,000 bpd to 585,000 bpd.

Oil prices have recovered after suffering losses late last week. Statements emerging from the OPEC meeting in Oman seemed to shore up confidence in the group’s efforts this year, after a long list of oil analysts raised the prospect of wavering compliance and cohesion.

Saudi Arabia pushes for OPEC coordination beyond 2018. Saudi oil minister Khalid al-Falih said over the weekend that the coordination among OPEC and with Russia and other non-OPEC partners should continue beyond this year. “We should not limit our efforts to 2018. We need to be talking about a longer framework for our cooperation,” he said. The comments eased fears of faltering compliance with the production cuts. But al-Falih said his desire was to solidify long-term coordination to bolster confidence among the oil industry to invest in new upstream projects. The comments suggest that OPEC and Russia, at a minimum, could keep the cuts in place into 2019. “Keeping some level of production cuts into 2019 is the kind of thing that makes sense,” Robin Mills, CEO of Qamar Energy, told Bloomberg. “Just abandoning the deal at the end of 2018 would put a lot of oil back on the market.”

Bank of America: Peak oil demand 12 years away. Adding another voice to the peak oil debate, Bank of America Merrill Lynch predicts that the world will hit peak oil demand by 2030. At that point, EVs will account for 40 percent of auto sales. “Electric vehicles will likely start to erode this last major bastion of oil demand growth in the early 2020s and cause global oil demand to peak by 2030,” the analysts wrote in an emailed report.

China boosts global gas demand. China’s switch from coal to natural gas is adding a lot of demand to the global gas market, pushing up LNG prices to three-year highs. China has made significant headway in shutting down dirty coal plants, but as gas consumption ramps up, the country has had trouble finding enough gas. As China gobbles up more LNG cargoes, LNG prices are rising quickly. “We were optimistic on the opportunity in China, but the magnitude surprised us,” Anatol Feygin, chief commercial officer at U.S. LNG exporter Cheniere Energy (NYSE: LNG), told the Wall Street Journal. LNG prices in Asia rose to $11.70/MMBtu, the highest price since November 2014.

Russia to invest in Saudi Aramco. In a move to strengthen the strategic partnership between Russia and Saudi Arabia, Reuters reports that Russian pension funds are planning on investing in Saudi Aramco when it goes public. That could reinforce efforts for the two top oil producers to coordinate their oil production efforts for years to come. “Extending such cooperation for many more years would be very useful for the market. It has proven its efficiency, when we were targeting balancing supply and demand rather than targeting a particular oil price,” the head of Russia’s Direct Investment Fund, Kirill Dmitriev, told Reuters on Tuesday.

Trump slaps tariffs on solar panels. The Trump administration moved forward withtariffs on imported solar panels, dealing a blow to the rapidly growing renewable energy industry. The duties will reach as high as 30 percent on solar equipment and will be ratcheted down in the years ahead. The White House also said that additional tariffs will be forthcoming on steel, aluminum and other products from China. The solar industry has warned that the decision could drive up the cost of solar projects, threatening to undermine the sector’s competitiveness.

East Coast refiner declares bankruptcy. Philadelphia Energy Solutions, the owner of the largest refinery on the U.S. East Coast, said on Monday that it would declare bankruptcy. The company said that its emergence from bankruptcy depends on its ability to shed liabilities related to its requirement to purchase credits related to the renewable fuels standard. The 335,000-bpd refinery will continue to operate through bankruptcy.

Investment approvals for new oil projects rising. Major oil projects that were delayed when oil prices crashed are starting to receive approvals. Rystad Energy says that the number of delayed projects that have now received a greenlight doubled in 2017 from the combined number in 2015 and 2016. Those projects span Brazil, Angola China and elsewhere and are a sign of rising confidence in new upstream investments.

Hedge fund sees $80 oil; others see falling prices. BBL Commodities LP, one of the world’s largest oil-focused hedge funds, predicts oil prices will rise to $80 per barrel this year on the back of falling inventories. “We think the market is vastly overestimating the near term inventory buffer,” Jonathan Goldberg, the founder of BBL Commodities, toldBloomberg. “Given the rise in demand over the past five years, inventories are especially low as a measure of forward cover.” On the other hand, Barclays says the current focus on falling inventories is myopic. “The market is dangerously focused on newly published backwards-looking data and, in our view, is not paying attention to the stockbuilds that are likely to emerge later this year and in 2019.” The investment bank says oil prices are probably at their high point for the year, and the bank predicts Brent will average just $60 per barrel in 2018.

Libya restores 55,000 bpd in output. Production at Libya’s As-Sarah field resumed on Sunday, expecting to add about 55,000 bpd of capacity.

Halliburton voices optimism about oil market. Halliburton (NYSE: HAL) reportedearnings of 53 cents per share in the fourth quarter, up sharply from 4 cents from a year earlier. The better-than-expected performance came as North American drilling activity picked up, boosting both demand for its services and its pricing. Jeff Miller, the company’s new CEO, said the fourth quarter was “excellent,” and that 2017 was “a dynamic year for the oil and gas sector that marked another step on the road to recovery for our industry.” He also said that he was “optimistic about what I see in 2018.” 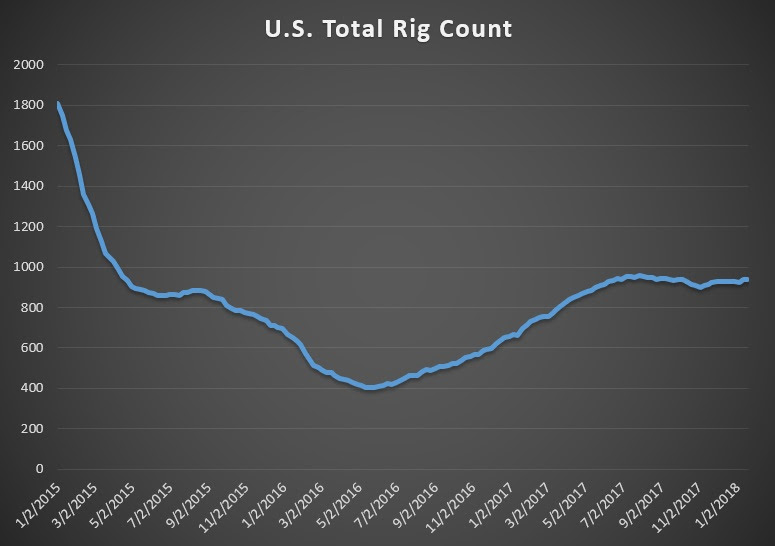 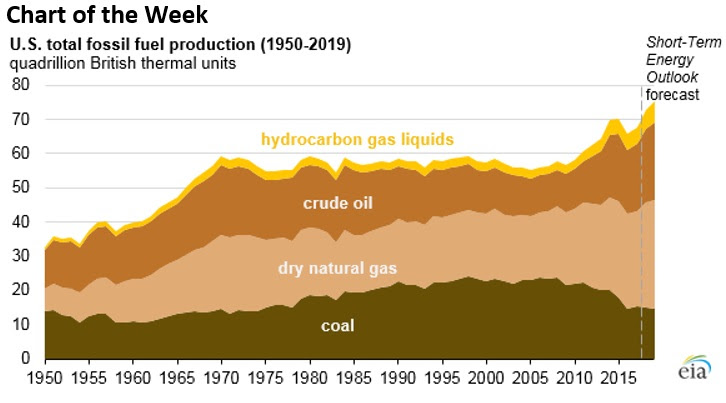