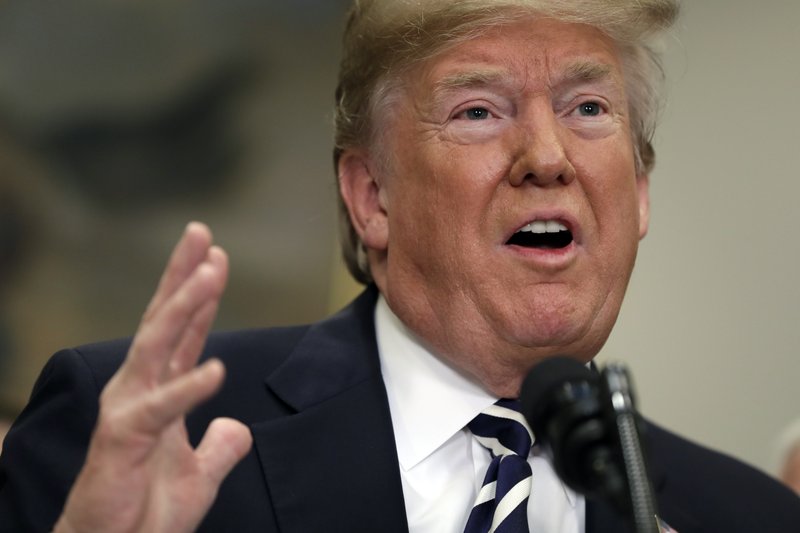 Moon was speaking at an emergency meeting of his top security officials in Seoul after Trump announced he was canceling the summit because of North Korean “hostility.”

Moon was quoted as saying: “I am very perplexed and it is very regrettable that the North Korea-U.S. summit will not be held on June 12.”

He said, “Denuclearization of the Korean Peninsula and the establishment of permanent peace are historic tasks that can neither be abandoned nor delayed.”

Moon met Trump in Washington on Tuesday, but appeared caught unawares by the president’s decision Thursday. 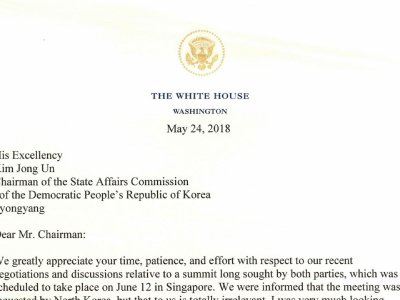 President Donald Trump is canceling the planned June 12 summit with North Korea’s Kim Jong Un, citing the “tremendous anger and open hostility” in a recent statement from North Korea. Trump made the comments in a letter to Kim released Thursday. (May 24)

The White House is accusing North Korea of displaying a lack of judgment in dealing with the U.S. over the now-cancelled summit between President Donald Trump and Kim Jong Un.

A senior White House official says the North Korean government violated several promises to the U.S. and South Korea, stood up an American delegation seeking to plan the summit in Singapore last week and did not return messages from the U.S. seeking to discuss the meeting.

The official says the North also reneged on a pledge to allow international inspectors to monitor the supposed demolition of its nuclear test site Thursday. International journalists were present, but the U.S. government can’t verify the site’s destruction.

The official spoke on the condition of anonymity to avoid overshadowing Trump’s comments Thursday.

But Putin said the North Korean leader “did everything that he had promised in advance, even blowing up the tunnels and shafts” of the country’s nuclear testing site. “After which, we heard about cancellation of the summit by the United States.”

Putin said: “In Russia, we took this news with regret, because we had very much counted on it being a significant step in sorting out the situation on the Korean peninsula and that it would be the beginning of the process of denuclearizing the whole Korean Peninsula.”

He spoke at a news conference with French President Emmanuel Macron.
___

That’s according to Republican Sen. Cory Gardner, who met with Bolton at the White House on Thursday, hours after Trump announced he was withdrawing from a planned summit with Kim next month.

Gardner told The Associated press that Bolton described the letter as a “wake-up” to Kim, who had shown a change in attitude after meeting with Chinese President Xi Jinping.

The senator cited the North Koreans’ refusal to return phone calls to the administration and turning down high-level talks with South Korea.

He said North Korea had shown a “lack of seriousness” in negotiating on denuclearization.

In the letter, Trump cited “hostility” from North Korea, but kept open the possibility for dialogue.
___

Pentagon officials say American forces on the Korean peninsula remain on a normal state of alert in the aftermath of President Donald Trump’s decision to cancel his planned summit with North Korea’s leader.

Trump said he had spoken to Defense Secretary Jim Mattis about the cancellation and that the U.S. military is prepared for what he called a “foolish or reckless” act by the North.

A spokesman for the Pentagon’s Joint Staff, Lt. Gen. Kenneth McKenzie, told reporters the U.S. military will be ready for any North Korean provocation such as a missile launch. But he said the state of vigilance by the U.S. military in South Korea has not changed, with no new preparations or actions since Trump’s announcement. He said U.S. forces are in a “boxer’s stance,” prepared to defend themselves and South Korea.
___

President Donald Trump says he thinks Kim Jong Un wants to do “what’s right” but says it’s up to the North Korean leader to seize the opportunity.

Trump says the dialogue between the U.S. and North Korea was good until the North shifted back to its usual belligerent tone. The president says he understands why that happened, but declined to elaborate.

Trump has canceled a summit with Kim planned for June 12 in Singapore, but has left the door open to meeting on that or another date.

The president adds: “We’ll see whether or not that opportunity is seized by North Korea.”
___

Trump opened the door for diplomacy Thursday just hours after he canceled a summit with Kim scheduled for next month in Singapore.

But he insisted that Kim reach out, placing the blame on the North Korean leader for the collapse of negotiations.

He also said that until that happened, tough sanctions on Pyongyang would continue and the U.S.-led “maximum pressure campaign is continuing.”

Trump and Kim had been slated to meet June 12 for what White House officials had hoped would be a historic diplomatic breakthrough for the president.

They advised that the summit could be rescheduled.
___

President Donald Trump says the U.S. military is “ready if necessary” to respond to “foolish or reckless acts” by North Korea.

Trump also says he’s been in touch with South Korea and Japan and that both allies are willing to bear much of the financial burden “if such an unfortunate situation is forced upon us.”

Trump says hopefully “positive things” will take place with respect to North Korea’s future. But he adds “If they don’t we are more ready than we have ever been before.”
___

Secretary of State Mike Pompeo says he was involved in discussions late Wednesday and early Thursday that led to President Donald Trump’s decision to pull out of a planned summit with North Korean leader Kim Jong Un. But, he would not say exactly which, if any, other countries were given a head’s up on the decision, including South Korea.

“I don’t want to get into who all we notified,” he told the Senate Foreign Relations Committee, adding: “The White House will speak to that at the appropriate time.”

However, Pompeo, who met at the State Department on Wednesday with China’s foreign minister, did say that he had not spoken to Chinese officials since the decision was made.

Asked about a report that South Korea had not been informed before the president’s letter to Kim canceling the summit was made public, Pompeo maintained that Washington and Seoul were “in lockstep.”
___

A prominent Russian lawmaker says the cancellation of the planned summit between President Donald Trump and North Korea’s Kim Jong Un is a serious setback.

Konstantin Kosachev, chairman of the foreign affairs committee in the upper house of the Russian parliament, is quoted by the news agency Interfax as saying: “The rejection by Trump of conducting the American-North Korean summit undoubtedly is a serious blow to peaceful settlement in the region.”

He adds that “it’s already the second blow, after the exit from the agreement on the Iranian nuclear program, to global stability in general.”
___

A Republican senator often critical of Donald Trump says the president “made the right call” in canceling a summit with North Korea’s leader.

Sen. Ben Sasse of Nebraska says Kim Jong Un is a “murderous despot and habitual liar.” Sasse is often critical of Trump but is siding with the president on his decision Thursday to pull out of the summit that had been planned for June 12 in Singapore.

Trump cited recent aggressive statements from Kim’s government for his decision to cancel the meeting.

Sasse adds in a statement that if North Korea wants diplomacy, “it should know that half-measures and spin about its nuclear program won’t cut it.”

Sasse is a member of the Senate Armed Services Committee,
___

The U.N. chief says he is “deeply concerned” by the cancellation of the planned summit between U.S. President Donald Trump and North Korean Leader Kim Jong Un.

Antonio Guterres told an audience at the University of Geneva on Thursday that he was urging the parties to keep working “to find a path to the peaceful and verifiable denuclearization of the Korean Peninsula.”

Guterres’ comments came as he laid out his disarmament agenda, warning that nuclear agreements between states have been threatened like never before.

House Speaker Paul Ryan says achieving a peaceful resolution to the nuclear standoff on the Korean Peninsula will require “a much greater degree of seriousness” from Kim Jong Un.

Ryan says in a statement Thursday that Kim’s government has long given ample reason to question its commitment to stability.

The Republican says that, until a peaceful resolution is achieved, Congress has provided “significant tools” to hold North Korea accountable.

Ryan says the U.S. must continue the “maximum pressure” campaign that Trump and others say brought North Korea to the table in the first place.
___

Pompeo told the Senate Foreign Relations Committee on Thursday that the lack of response was an additional reason for Trump’s decision to call off the meeting. Trump cited recent bellicose comments from the North in a letter to Kim released by the White House.

Pompeo says: “We had received no response to our inquiries from them.”

Pompeo says the North’s attitude changed markedly since he returned from a trip to Pyongyang earlier this month, when he met with Kim and secured the release of three American prisoners being held there.
___

A senior Democratic senator says President Donald Trump’s withdrawal from a planned summit with North Korea shows the consequence of his failure to prepare properly.

Sen. Bob Menendez of New Jersey said Thursday that the withdrawal shows “the art of diplomacy is a lot harder than the art of the deal.”

The top-ranking Democrat on the Senate Foreign Relations Committee says it’s “pretty amazing” that Trump’s Republican administration would be shocked that North Korea “is acting as North Korea might very well normally act.”

He adds: “I’m not sure that constantly quoting the Libya model is the diplomatic way to try to get to the results that we seek in North Korea because that didn’t work out too well for Gadhafi.”

Menendez was speaking Thursday at a committee hearing attended by Secretary of State Mike Pompeo.

RELIGION: US prelate McCarrick resigns from College of Cardinals