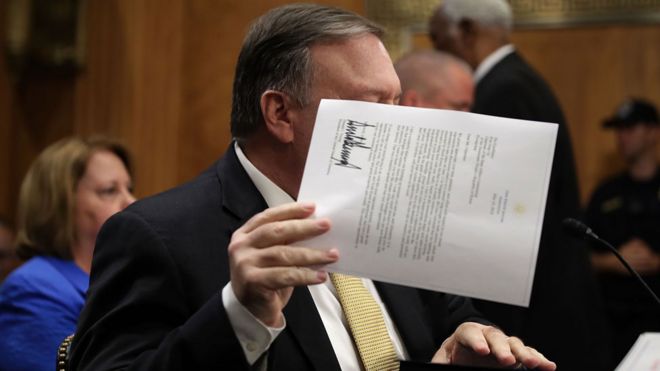 Donald Trump called off the upcoming US-North Korea summit on Thursday morning, catching much of official Washington, and the world, by surprise. How he did it – in a personal letter to North Korean leader Kim Jong-un – offers revealing insight at Trump-style diplomacy and what might happen next.
Paragraph oneThe missive from Donald Trump – addressed to “his excellency”, an unusual title for Mr Kim – begins a bit like a corporate form letter, thanking the North Korean leader for his “time, patience and effort”.

There’s a bit of a passive-aggressive dig at Mr Kim – pointing out that he was the one who wanted the meeting, even if that’s “totally irrelevant” – and an emphasis that this was a “long-planned meeting” (the idea was first suggested in March and a date and time set just weeks ago).

The real meat of the letter comes at the end of the paragraph, however, as the president’s pen turns poison.

The North Koreans announced Thursday morning that they had collapsed the tunnels at their nuclear test site, but they accompanied it with threats of nuclear war and a demeaning dig at Vice-President Mike Pence (called “a political dummy”). Mr Trump has shown time and time again that he won’t abide verbal swipes from the North Koreans.

He responds to their nuclear sabre-rattling with another round of “fire and fury” style language, boasting about the massive and powerful US nuclear arsenal that Donald Trump prays to God will never be used. It’s a return to the rhetoric of last summer, when it appeared the US and North Korea were headed toward a military confrontation. The start of the letter may be diplomat-speak, but this is Mr Trump’s voice coming through.

By the second paragraph, the diplomatic gloves are back on. There’s an emphasis on the recent thaw between the two nations (a “wonderful dialogue”) and a hint that the door has not been fully slammed shut.”

The president writes that he is still looking forward to meeting the North Korean strongman (nuclear apocalypse notwithstanding). And releasing three American prisoners, one of whom had been sentenced to forced labour in a sham trial, was a much-appreciated “beautiful gesture”. There will certainly be some critics who question whether this is an appropriate place to turn on the charm.

The business letter template kicks in again in the closing paragraph, albeit with somewhat tortured prose. “If you change your mind having to do with this most important summit, please do not hesitate to call me or write”. We have operators standing by!

It finishes on a wistful note. In his tweet announcing the time and place of the now-cancelled summit, the president had said the meeting could be a “very special moment for World Peace”. His supporters broached the idea that he should win a Nobel Prize, which he acknowledged by saying “everyone thinks so”, adding “the prize I want is victory for the world”.
Instead, it’s a “sad moment in history”.
Did you find apk for android? You can find new Free Android Games and apps.
Sharing is caring:
north korea, Analysing Trump's letter to Kim Jong-un World News No Comments » Print this News