MIGRANTS: You do not like them, pick your own veggies, fruits Exclusive: Brexit fears and falling pound left fruit and vegetable farms short of more than 4,000 workers, with senior MPs warning of a crisis
Damian Carrington (THE GUARDIAN) – Fruit and vegetable farms across the UK were left short of thousands of migrant workers in 2017, leaving some produce to rot in the fields and farmers suffering big losses.

More than 4,300 vacancies went unfilled, according to new survey data from the National Farmers Union (NFU), which covers about half the horticultural labour market. The survey, seen exclusively by the Guardian, shows more than 99% of the seasonal workers recruited came from eastern Europe, with just 0.6% from the UK.

Since the vote to leave the European Union in 2016, growers have warned repeatedly of damaging labour shortages, with recruiters reporting that Brexit has created the perception among foreign workers that the UK is xenophobic and racist.

The government, which has pledged to reduce immigration, has so far rejected calls to reinstate a seasonal agricultural workers scheme (Saws). Facing uncertainty over labour, some farmers have begun moving their production overseas. 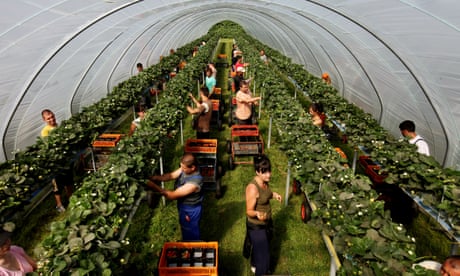 The NFU labour survey found that an average of 12.5% of vacancies went unfilled in 2017, the first time there has been a shortfall since the survey began in 2014. The proportion of workers returning to work in the UK after previous years is also dropping fast, from 41% in 2016 to 29% in 2017. The fall in the value of the pound after the Brexit vote has also helped make the UK less attractive.

Documents released to the Guardian under freedom of information rules from the government’s Saws Transition Working Group reveal that officials accepted that some farms were struggling as far back as July.

The group, comprised of government, growers and recruiters, discussed “creative options such as pick your own and working holidays, drawing on the Australia or New Zealand models”, according to a released meeting agenda from September, and considered a report that suggested cutting food waste would reduce the need for pickers.
Advertisement

“Growers are wondering how they are going to get through the [2018] season,” said Alison Capper, the chair of the NFU’s horticulture board. “There is an element of desperation.” She said numerous farms had been forced to leave produce to rot due to lack of labour, but that they did not publicise this because of fears of undermining the confidence of their supermarket customers.

The worst shortfall of labour in 2017 was in the crucial harvest month of September, when 29% of vacancies were unfilled. In Capper’s own apple orchards, 100 bins of Gala eating apples went unpicked, became overripe and had to be sent for juice instead, leading to a £30,000 loss.

Minette Batters, the NFU deputy president, has also said fruit and vegetables have rotted in fields and said government action was desperately needed: “This is the number one issue for growers. We don’t see it as an immigration problem – it’s about people that come here, are fully regulated and go home again. The Conservative party seem to have taken a very hard line approach.”

Guardian Today: the headlines, the analysis, the debate – sent direct to you

Batters said the horticulture sector had been trying to expand, to provide more homegrown produce: “When we have the climatic conditions to be very successful growers of fruit and veg, it seems a sacrilege not to be making the most of that.”

Neil Parish MP, the chair of the environment, food and rural affairs committee, said: “The nationwide shortage of labour is becoming an agricultural crisis for UK farms. It is unacceptable that perfectly good food is rotting in fields. At a time of uncertainty around our future trading relationships, we should be increasing our domestic food security rather than our reliance on imported foodstuffs.”

“The government is not acknowledging the scale of the issue,” he said. Last April, the committee called for “urgent measures” and launched a new enquiry on Monday.

The Labour party is committed to reinstating the Saws and shadow environment secretary Sue Hayman said: “Michael Gove and Theresa May cannot stick their heads in the sand forever. There are serious questions about the supply, affordability and quality of food we can expect after we leave the EU.” 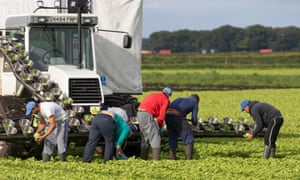 A government spokeswoman said: “The government places great value on the UK’s food and farming industries. Until we have left the EU, the UK will remain a member and employers in the agricultural and food processing sectors are free to continue to recruit EU workers.”

She said the prime minister had also proposed a further implementation period of two years, during which registered EU citizens can come work in the UK. The government has commissioned expert advice from the Migration Advisory Committee, but that is due to report in September, after the 2018 growing season. 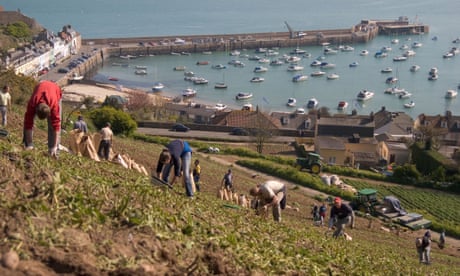 The UK’s 60-year-old Saws scheme was closed in 2013, before the end of immigration restrictions on workers from Bulgaria and Romania, which provide about two-thirds of the UK’s pickers.

Capper is unimpressed by the suggestion of holiday workers filling the labour gap: “[Australia and New Zealand] do have a working holiday visa scheme, but the vast majority of their fresh produce is picked by people on a seasonal workers scheme from Tonga and Samoa, the same way as our old Saws,” she said.

Haygrove raspberry and blueberry farm in Ledbury, Herefordshire is moving some of its growing to Yunnan province in China because of uncertainty over migrant labour. “It is one of many,” said Capper. “There are lots of businesses looking at other parts of Europe, South Africa, Australia, New Zealand, China. We are disinvesting in British production which is just appalling.”

Did you find apk for android? You can find new Free Android Games and apps.
Sharing is caring:
brexit, eu, Migrants, UK farm labour World News Comments Off on MIGRANTS: You do not like them, pick your own veggies, fruits Print this News