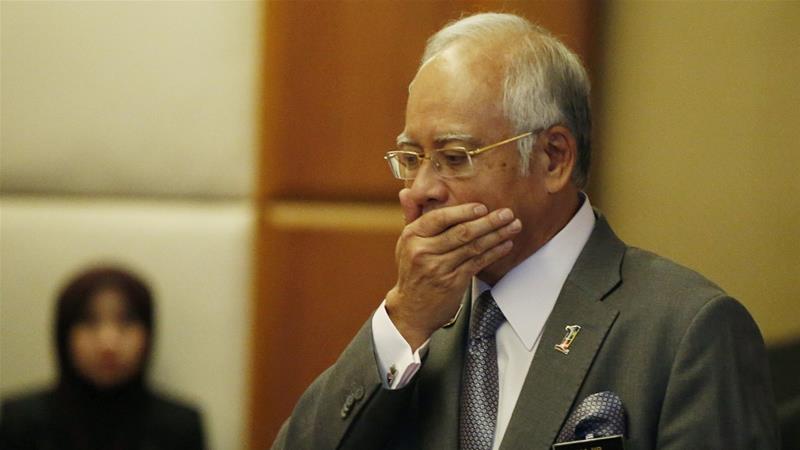 Former Malaysian Prime Minister Najib Razak has been arrested in Kuala Lumpur, state media reported, as part of a probe into alleged theft and money laundering at the 1MDB state investment fund.

Najib’s family lawyer told Channel News Asia on Tuesday that the former leader would be charged for his role in the 1MDB scandal the next day.

Alleged corruption at the 1MDB fund helped bring on the unexpected defeat of Najib’s coalition in the May 9 polls. The new government reopened investigations that were stifled while Najib was in office.

Riza was solemn as he arrived at the anti-corruption office and did not speak to reporters.

Al Jazeera’s Florence Looi, reporting from the capital, Kuala Lumpur, said Najib’s arrest is a “major development, but something that we had been expecting”.
What is 1MBD?

The state-owned 1Malaysia Development Berhad (1MBD) company was set up in 2009 soon after Najib became prime minister for the purpose of development investment to aid the country’s economy.

Allegations over the misappropriation of state funds at 1MBD emerged in 2015 as the public learned that $4bn had gone missing from the fund, and nearly $700m was allegedly transferred into Najib’s bank account.

The US Department of State filed a case in 2016, seeking to seize more than $1bn in assets linked to the fund.

Najib denied any wrongdoing and said the money was a donation from the Saudi royal family, which he had since returned.

Anger among Malaysians over the alleged use and abuse of taxpayer’s money was taken out on the ballot boxes in early May, denying Najib a third term in office and handing a landmark defeat to his ruling UMNO party.

After assuming power, Malaysia’s new government – a coalition of opposition parties headed by Prime Minister Mahathir Mohamad – set up a special task force to look into the possible criminal conduct of individuals involved in the management of 1MBD.

Economic analysts have criticised the state fund, calling it a “scam”.

“When you look at the entire structure with all the complicated and complex transaction across so many countries, it would seem like a way to siphon off money from a government-funding vehicle,” Yeah Kim Leng, professor of economics at Malaysia’s Sunway University, told Al Jazeera.

After Tuesday’s arrest, analysts said it is now just a matter of time until the true extent of the scandal will be revealed and more former government officials will likely face charges.

“In terms of political career, Najib is gone,” she told Al Jazeera. “Even though in the rule of law, one is innocent until proven guilty, in terms of the image Najib is carrying, it’s already gone.

“He will always be seen as the image of corruption,” Kartini added.

Najib and his wife’s lavish lifestyle has been under the microscope for years.

In a series of raids last month, Malaysian police said the total value of the bags of cash, jewellery, luxury purses, watches and other items seized from premises linked to former prime minister totalled up to $273m.

The government says it has discovered that taxpayer’s money has also been used to fund 1MDB’s debt obligations.

“So far, $1.8bn of state money has been used to bail out the fund, and hundreds of millions more will have to be paid out by the end of this year in interest payments,” said Al Jazeera’s Divya Gopalan, reporting from Kuala Lumpur. —— AUTO – GENERATED; Published (Halifax Canada Time AST) on: July 03, 2018 at 09:50AM