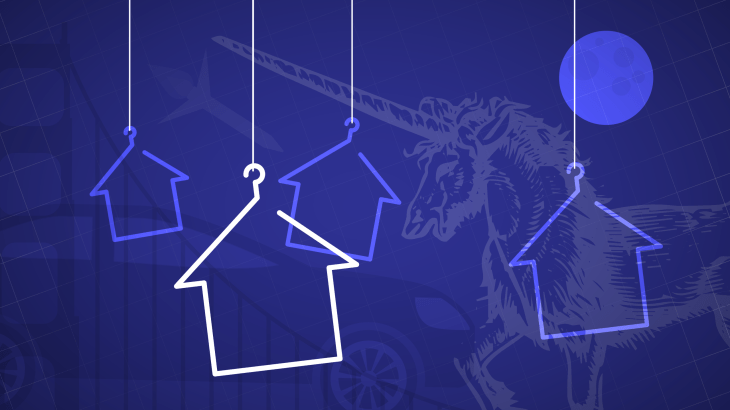 BY Joanna Glasner for Crunchbase.

When young adults leave the parental nest, they often follow a predictable pattern. First, move in with roommates. Then graduate to a single or couple’s pad. After that comes the big purchase of a single-family home. A lawnmower might be next.

Looking at the new home construction industry, one would have good reason to presume those norms were holding steady. About two-thirds of new homes being built in the U.S. this year are single-family dwellings, complete with tidy yards and plentiful parking.

In startup-land, however, the presumptions about where housing demand is going looks a bit different. Home sharing is on the rise, along with more temporary lease options, high-touch service and smaller spaces in sought-after urban locations.
Seeking roommates and venture capital

A Crunchbase News analysis of residential-focused real estate startups uncovered a raft of companies with a shared and temporary housing focus that have raised funding in the past year or so.

This isn’t a U.S.-specific phenomenon. Funded shared and short-term housing startups are cropping up across the globe, from China to Europe to Southeast Asia. For this article, however, we’ll focus on U.S. startups. In the chart below, we feature several that have raised recent rounds. 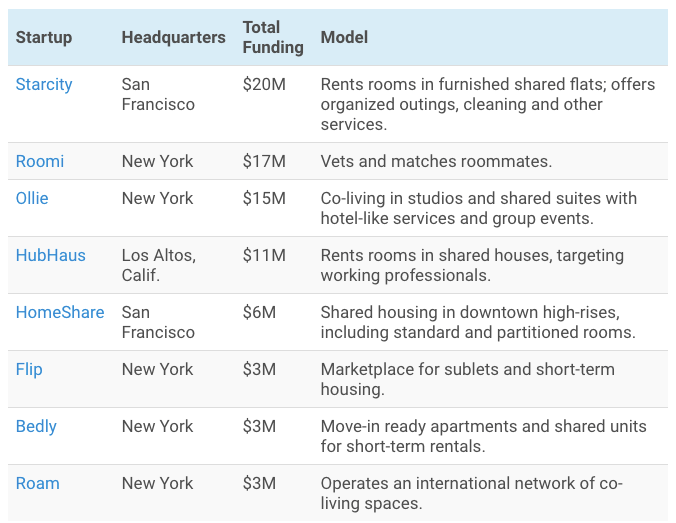 Notice any commonalities? Yes, the startups listed are all based in either New York or the San Francisco Bay Area, two metropolises associated with scarce, pricey housing. But while these two metro areas offer the bulk of startups’ living spaces, they’re also operating in other cities, including Los Angeles, Seattle and Pittsburgh.
From white picket fences to high-rise partitions

The early developers of the U.S. suburban planned communities of the 1950s and 60s weren’t just selling houses. They were selling a vision of the American Dream, complete with quarter-acre lawns, dishwashers and spacious garages.

By the same token, today’s shared housing startups are selling another vision. It’s not just about renting a room; it’s also about being part of a community, making friends and exploring a new city.

One of the slogans for HubHaus is “rent one of our rooms and find your tribe.” Founded less than three years ago, the company now manages about 80 houses in Los Angeles and the San Francisco Bay Area, matching up roommates and planning group events.

Starcity pitches itself as an antidote to loneliness. “Social isolation is a growing epidemic—we solve this problem by bringing people together to create meaningful connections,” the company homepage states.

The San Francisco company also positions its model as a partial solution to housing shortages as it promotes high-density living. It claims to increase living capacity by three times the normal apartment building.
Costs and benefits

Shared housing startups are generally operating in the most expensive U.S. housing markets, so it’s difficult to categorize their offerings as cheap. That said, the cost is typically lower than a private apartment.

Mostly, the aim seems to be providing something affordable for working professionals willing to accept a smaller private living space in exchange for a choice location, easy move-in and a ready-made social network.

At Starcity, residents pay $2,000 to $2,300 a month, all expenses included, depending on length of stay. At HomeShare, which converts two-bedroom luxury flats to three-bedrooms with partitions, monthly rents start at about $1,000 and go up for larger spaces.

Shared and temporary housing startups also purport to offer some savings through flexible-term leases, typically with minimum stays of one to three months. Plus, they’re typically furnished, with no need to set up Wi-Fi or pay power bills.
Looking ahead

While it’s too soon to pick winners in the latest crop of shared and temporary housing startups, it’s not far-fetched to envision the broad market as one that could eventually attract much larger investment and valuations. After all, Airbnb has ascended to a $30 billion private market value for its marketplace of vacation and short-term rentals. And housing shortages in major cities indicate there’s plenty of demand for non-Airbnb options.

While we’re focusing here on residential-focused startups, it’s also worth noting that the trend toward temporary, flexible, high-service models has already gained a lot of traction for commercial spaces. Highly funded startups in this niche include Industrious, a provider of flexible-term, high-end office spaces, Knotel, a provider of customized workplaces, and Breather, which provides meeting and work rooms on demand. Collectively, those three companies have raised about $300 million to date.

At first glance, it may seem shared housing startups are scaling up at an off time. The millennial generation (born roughly 1980 to 1994) can no longer be stereotyped as a massive band of young folks new to “adulting.” The average member of the generation is 28, and older millennials are mid-to-late thirties. Many even own lawnmowers.

No worries. Gen Z, the group born after 1995, is another huge generation. So even if millennials age out of shared housing, demographic forecasts indicate there will plenty of twenty-somethings to rent those partitioned-off rooms.

UGANDA: Kadaga’s hospital runs out of drugs, gloves as Interns return to work