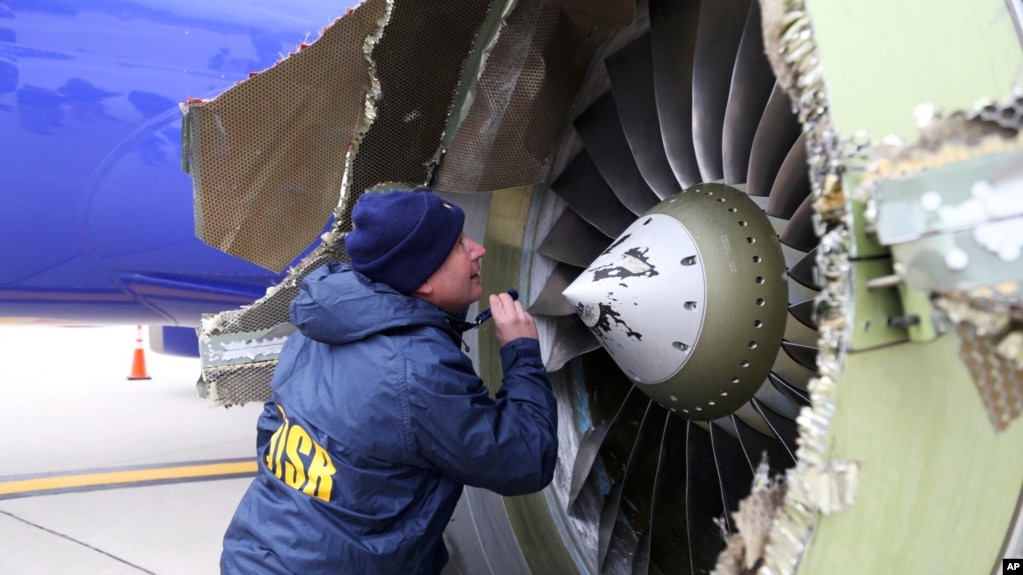 A National Transportation Safety Board investigator examines damage to the engine of the Southwest Airlines plane that made an emergency landing at Philadelphia International Airport in Philadelphia, April 17, 2018. (NTSB via AP)

The engine on a Southwest Airlines plane blew apart on Tuesday. Debris from the explosion broke a window. A woman sitting next to the window was partially sucked out of the plane. She later died of her injuries. The plane, which was traveling from New York to Dallas, Texas, made an emergency landing in Philadelphia.

Investigators said a blade in the engine broke off during the flight. They said the blade showed signs of metal fatigue — very small cracks that can break apart under stress.

In 2016, U.S. officials also blamed metal fatigue on a similar engine failure on another Southwest Airlines plane in Florida. 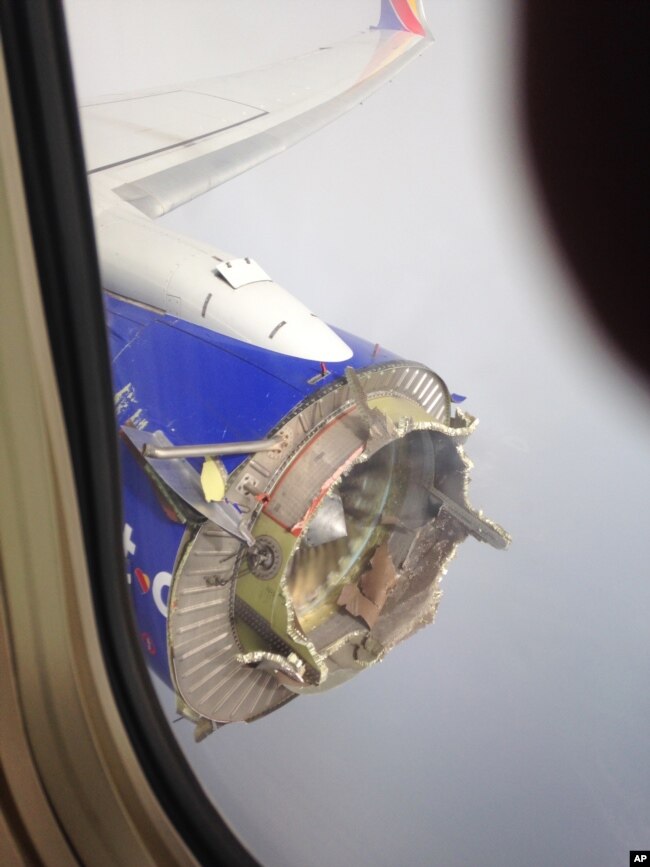 FILE – This Saturday, Aug. 27, 2016 photo shows an engine through a window of a Southwest Airlines flight. The flight from New Orleans bound for Orlando, Fla., diverted to Pensacola, Fla., after the pilot detected something had gone wrong with an engine

The incident led the manufacturer CFM International to recommend last June that airlines carry out inspections of fan blades in its CFM56-7B engines.

CFM International is a joint business of GE Aviation and France’s Safran Aircraft Engines. The company says over 8,000 CFM56-7B engines are currently in use on Boeing’s 737 airplanes.

Robert Sumwalt is chairman of the National Transportation Safety Board. He said, “Engine failures like this should not occur.”

But he advised it was too soon to question the safety of the engines or the Boeing 737s. The plane is the most popular commercial airplane in the world.

On Wednesday, the FAA said it will require inspections of fan blades on CFM56-7B engines after they reach a certain number of takeoffs and landings. Blades that fail inspection would need to be replaced.

Southwest Airlines announced its own program for similar inspections of its 700 planes over the next month.

debris –n. the pieces that are left after something has been destroyed

blade –n. one of the flat spinning parts that are used in some machines that push air, such as jet engines