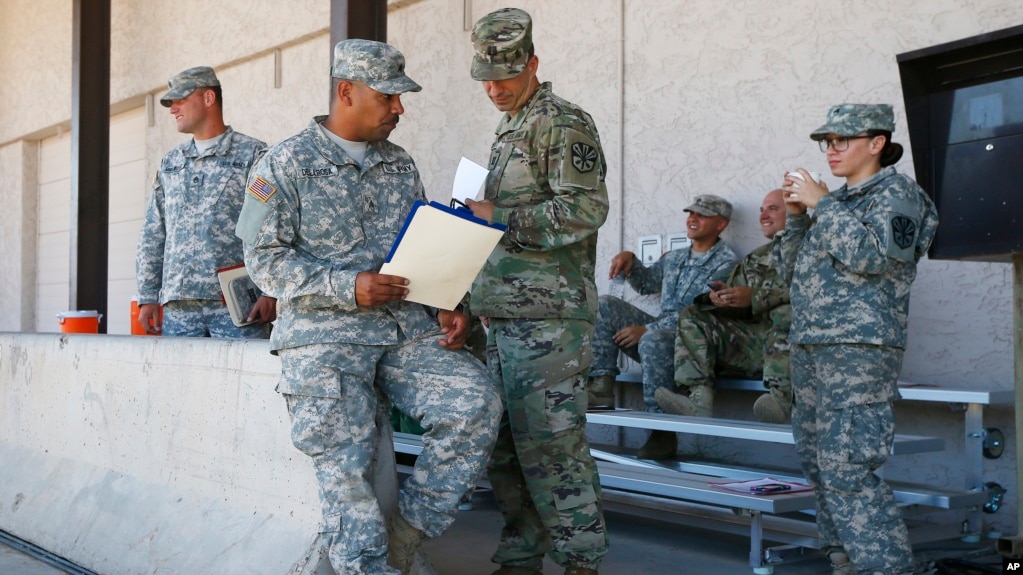 Arizona National Guard soldiers receive their reporting paperwork prior to deployment to the Mexico border at the Papago Park Military Reservation in Phoenix, April 9, 2018.

VOA LEARNING ENGLISH – National Guard members have started arriving at the United States border with Mexico. More of the reserve military members are expected to arrive in the coming weeks.

The governors of Texas, Arizona and New Mexico have promised 1,600 National Guard troops to serve at the border.

President Donald Trump requested the troops to increase border security. He has called the illegal immigration and drug trafficking situation in the area a crisis. A proclamation on the issue notes “the lawlessness that continues at our southern border.”

California has not announced whether troops from the state’s National Guard will take part. California’s Governor, Jerry Brown, has often disagreed with Trump’s immigration policies. Brown is a member of the Democratic Party.

The president said last week that he wants to send 2,000 to 4,000 National Guard members to the border.

Trump administration officials have said immediate action is needed to deal with the increasing number of people caught at the border. The number of people trying to cross the border illegally has sharply increased in recent weeks, in part because of warming weather.

Arizona Governor Doug Ducey spoke to Guard troops on Monday. He said that their “mission is about providing manpower and resources” to support border control agencies. 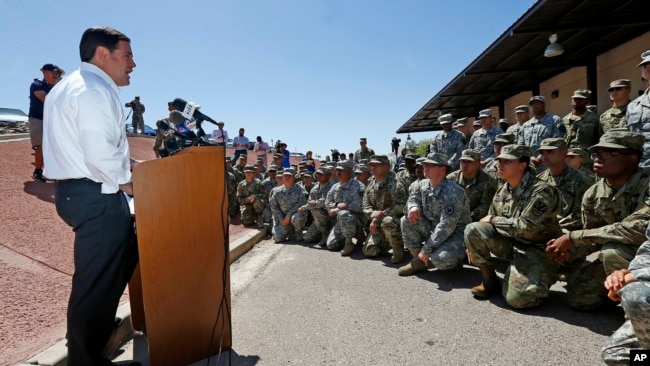 The Associated Press reported that Ducey said he did not consider the deployment a political issue.

“You show me somebody who is for drug cartels or human trafficking or this ammunition that’s coming over a wide-open and unprotected border here,” he said.

Speaking to a local radio station, Texas Governor Greg Abbot said his state would provide about 300 troops each week, for a total of at least 1,000 troops. He said some Guard members will be armed if they are deployed to a possibly dangerous place. However, he added that is not the main purpose for their deployment.

Abbot, who is a Republican, also said there was no time limit for the deployment.

New Mexico’s governor Susana Martinez said more than 80 Guard members would deploy this week. She said they will be the first of about 250 troops from New Mexico to serve on the border. South Carolina Governor Henry McMaster also offered to deploy troops to the border. Martinez and McMaster are both members of the Republican Party, like Trump.

The Defense Department has approved the deployment of up to 4,000 National Guard troops through September.

Mexico’s secretary of foreign affairs said his government is considering its cooperation with the United States.

Luis Videgaray told local media on Monday that he will give the results of a study on the situation to President Enrique Peña Nieto in the coming weeks.

Mexico’s Senate passed a resolution calling on the government to suspend cooperation with the United States on illegal immigration and drug trafficking. The measure, which is said to be an answer to Trump’s border actions, is non-binding.

Videgaray said no action had been taken. “No decision has been taken to reduce or suspend any mechanism or cooperation,” he said.