LEARNING ENGLISH: Are you crazy about English? 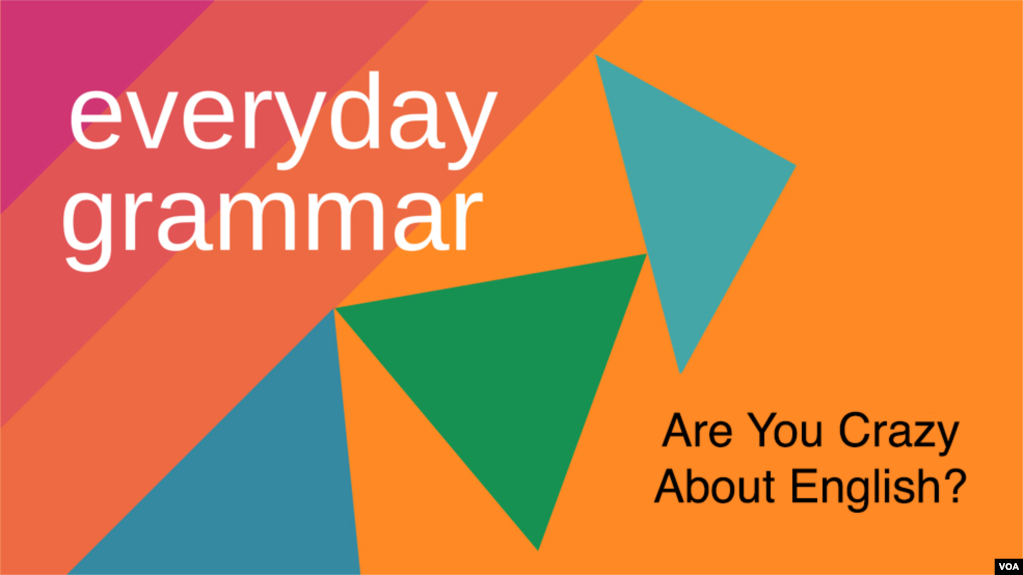 Everyday Grammar: Are You Crazy About English?

VOA LEARNING ENGLISH – English speakers express likes and dislikes in so many ways. By now, you’ve learned how to use words such as like, enjoy, love, or even hate. For example:

She really likes the new professor.

We enjoy restaurants by the water.

I love traveling to distant places.

They hate cold weather and snow.

These are simple and common ways to express likes and dislikes. But fluent speakers of English use other ways, too.

Some are a little more nuanced and less direct. Today, we’ll show you four phrases you can start using as soon as you like.

Let’s start with to be into. This phrase is very informal. And American English speakers often include the adverb really in it. To be really into something means you like it a lot.

One structure for using this phrase is subject + to be + like/dislike word or phrase + noun. Listen:

I’m really into karaoke. I sing in front of crowds every chance I get.

But, what if you wanted to express that someone is really into doing something? The structure changes a little. Listen:

I’m really into singing pop songs from the ‘80s.

Here, it’s subject + to be + like/dislike word or phrase + gerund (and sometimes) + noun. The gerund in this example is singing and songs is the noun.

All the phrases you’ll hear today can be used with either of these two structures.

The negative form of the phrase – to not really be into – often doesn’t exactly mean someone has a strong dislike for something; it may just mean the person has little or no interest in it. Listen:

He’s not really into baseball. But he loves soccer. Maybe you guys can catch a soccer game?

Let’s move on to the next one. Like the phrase to be really into, to be a fan ofsomething means you like it a lot. Americans usually add the adjective ‘big’ or ‘huge’ to this phrase.

One thing to note: you may have heard people say they are fans of a sports team or of a movie star. These are common ways to use ‘fan.’ But you can be a fan of just about anything. Listen:

I’m a big fan of sushi. I know a great Japanese place we can go to.

Notice this example uses the first structure we discussed.

Also, with this phrase, sometimes the word fan comes after the thing that you like. Listen:

I’m a big sushi fan. I know a great Japanese place we can go to.

When we use the negative form – not a big fan of – it expresses a stronger emotion than saying you’re not really into it. Listen:

I’ve never been a huge fan of shopping at supermarkets. They’re too crowded. I prefer to order my groceries online.

Notice that this example uses have been, which is a tense of the verb to be. It also uses the second structure we discussed earlier.

For the rest of the program, you can examine the sentence structure yourself. Remember, all the phrases today follow one of the two patterns.

Now, let’s talk about the phrase to be crazy about. This phrase’s positive and negative forms have very different uses.

In American English, we use the positive form much less frequently. And, it is mainly used to express strong romantic feelings for someone. Listen:

He’s crazy about her. I think he’s going to ask her to marry him.

We also sometimes use it for activities such as sports or the arts:

My kids are crazy about football. They’re going to football camp this summer.

An older way of saying the phrase used the preposition for instead of about:

He’s crazy for opera. He buys tickets every season, no matter how much they cost.

Now, to the negative – we almost always use the negative form for non-romantic things. It means the same as to not be a fan of. Listen:

I’m not crazy about mowing lawns. I usually pay someone to do the job for me.

Our last phrase for today – to be fond of – is mostly used for food and people. This phrase is generally more common in British English. But its negative form is fairly common in the United States.

To be fond of means having a liking or love for someone or something. Listen:

She’s been fond of that boy since they were babies.

The negative form means you don’t like something. Listen:

Mark has never been fond of vegetables. I don’t think I’ve ever seen him touch a salad– ever!

Of course, there are many more ways to express likes and dislikes in English. But learning these four phrases is a good start.

Don’t forget that you can still freely use the words you’ve already been using – like, enjoy, love and others. These new phrases just give you more options.

And if you’re a big fan of learning English, well then, give them a try!

Here are the two common structures we talked about today:

nuanced – adj. characterized by subtle shades of meaning or expression

karaoke – n. a form of entertainment in which a device plays the music of popular songs and people sing the words to the songs they choose

gerund – n. an English noun formed from a verb by adding -ing

fan – n. a person who likes and admires someone or something in a very enthusiastic way

pattern – n. the regular and repeated way in which something happens or is done

mow – v. to cut something, such as grass, with a machine or blade

lawn – n. an area of ground, such as the ground around a house, that is covered with short grass

Did you find apk for android? You can find new Free Android Games and apps.
Sharing is caring:
education Education No Comments » Print this News

X-Files From The Village