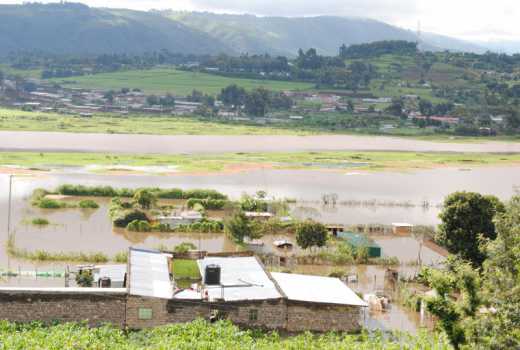 STANDARD MEDIA – Some of the houses that were submerged by the flood waters at Nairagie Enkare in Narok East Sub-County.(Robert Kiplagat, Standard)

The raging flood waters engulfed a total of five churches, destroyed tens of acres under maize, bean and banana plantation forcing the residents to flee their homes to safer grounds.

The dams located six kilometres apart overflew following heavy downpour being experienced in the area in the last two weeks.

Njoroge Kamau, one of the residents who was living at a rental house in the now flooded area is counting losses as he did not manage to salvage nay of his belongings when the waters swallowed the plot he was living with his family.

“I woke up only to meet my utensils and clothes floating in water with my bed half filled with water.I hurriedly picked my children and rushed out with my wife.I however lost a bag of maize and beans among other food stuffs in the house,” he said.

He lamented following the incident, house rent at the nearby Nairagie Enkare trading center shot up from the previous Sh700 to Sh 1, 500 for a single roomed house due to the high demand of houses on the upper land.

According to Mzee James Monoru, the water pans which were constructed in 1930’s had a similar overflow during the El-Nino rains in 1998 but has never flooded as witnessed in this season.

Monoru who has built four single rooms to let in the affected area laments that he has incurred a huge loss as his houses have submerged and all his four tenants vacated.

Kosiom Ole Porika an elder in the area lauded the police for responding promptly and retrieving the bodies of the two that had drown in the water.

The village elder also called on the county government to supply enough drugs to the health centres in the area as the stagnant water poses a great threat of waterborne diseases such as cholera to the locals.

Area OCPD Joseph Kisombe confirmed that tens of people have perished this month due to drowning in different areas of the sub county. —— AUTO – GENERATED; Published (Halifax Canada Time AST) on: May 24, 2018 at 06:30AM

KENYA: Uhuru order for lie detectors in GRAFT probe — WHAT A JOKE!