Kabila tells UN he is fighting terrorists in DRCongo

The Democratic Republic of the Congo’s president told the U.N. General Assembly annual gathering Saturday that his military was fighting terrorists in the center and east of the country.

The fighting in the central Kasai province has displaced more than 1.4 million people. Dozens of mass graves have been uncovered.

President Joseph Kabila blamed the violence on the Kamuina Nsapu militia, who he said was “sowing terror.” He is heard here through an interpreter.

“In Kasai, a mystical religious tribal militia is using the civilian population, including children, as a human shield, and has carried out attacks on persons and buildings symbolizing state authority,” Kabila said through an interpreter.

In March, U.N. experts Zaida Catalán, a Swede, and American Michael Sharp were slain while investigating human rights abuses in the province. Kabila said he regretted the barbaric killings and they would not go unpunished.

U.N. investigators have said they cannot preclude the involvement of different actors, including state security services, in the crimes.

In the country’s volatile east, Kabila said the army had made progress containing rebels from the Allied Democratic Forces (ADF).

Of the country’s presidential elections, which were supposed to take place in December, Kabila said DRC was moving toward them.

“This is an irreversible process, and this all is, and should be, taking place without external dictates or interference,” he said. 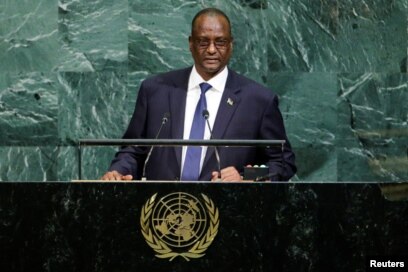 “Realization of peace takes time,” he said. “Attaining peace in South Sudan is a process; it requires our collective efforts.”

He said refugees and the displaced, of which the country has more than 3 million, were gradually returning to their villages. Nearly 4 million South Sudanese are facing severe hunger, but the vice president only alluded to the need for continued support to achieve a hunger-free country.

Did you find apk for android? You can find new Free Android Games and apps.
Sharing is caring:
dictator, human rights, kabila, drc, congo, Kasai DR Congo Comments Off on Kabila tells UN he is fighting terrorists in DRCongo Print this News

AFRICA: The man who was caged in a zoo