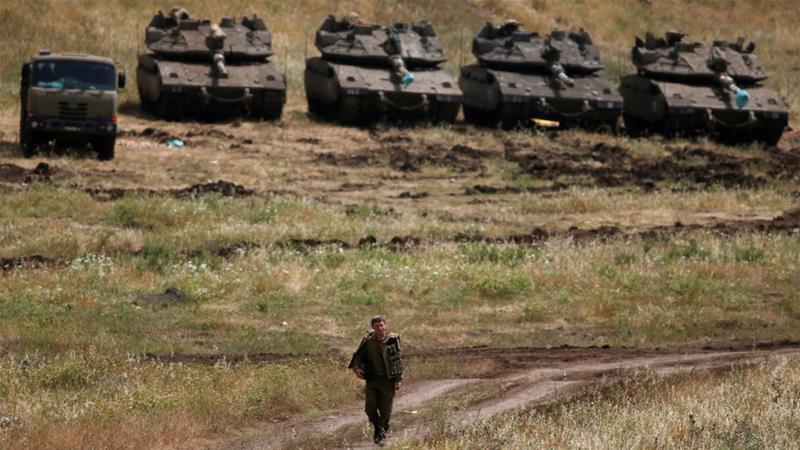 Israel to push for US recognition of occupied Golan Heights

AL JAZEERA – Israel’s Intelligence Minister Israel Katz says that US recognition of its sovereignty is top of its agenda.


Israel’s intelligence minister has said US recognition of its sovereignty over the occupied Golan Heights is at the top of the agenda in its diplomatic talks with its closest ally.

Israel Katz told the Reuters news agency that the move – in what is internationally recognised as Syrian territory – would be a “painful response” for Iran, which has a military presence in Syria.

“This is the perfect time to make such a move. The most painful response you can give the Iranians is to recognise Israel’s Golan sovereignty – with an American statement, a presidential proclamation, enshrined (in law),” he said.

Israel has occupied the Golan Heights since it defeated Syria in the 1967 Arab-Israeli war and has in the past mulled returning the territory to Syria in exchange for a peace deal with Damascus.

The Israelis have since changed tactics and argued in favour of keeping the land, citing the civil war in Syria and Iran’s presence there in support of the Syrian government.
‘Iranian proxy’

Katz said Israel wanted the Syrian government to distance itself from the Iranian government in exchange for Israel’s non-intervention in the country.

“If [Assad] becomes an Iranian proxy, then sooner or later he’s condemning himself, because Israel is acting against Iran in Syria.

“If not, then we have always said we have no interest in getting involved there.”
If he [Assad] becomes an Iranian proxy, then sooner or later he’s condemning himself, because Israel is acting against Iran in Syria

Earlier this month, Israel launched air attacks on Iranian targets in Syria after it accused Iran of launching missiles towards its positions in the occupied Golan Heights.

In February an Israeli F16 fighter jet was shot down and crashed over Israeli territory after it targeted Iranian positions in Syria.

The incident followed the entry of an Iranian drone into the occupied Golan Heights.