FRONCOPHONIE: Macron backs Rwandan candidate to lead French-speaking group – What is wrong with him? 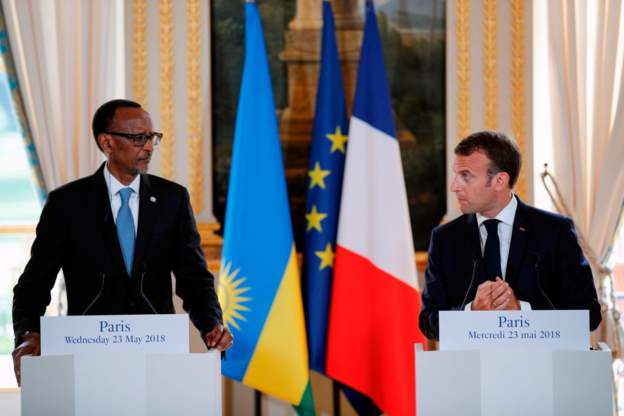 BBC – French President Emmanuel Macron has backed the candidacy of Rwandan Foreign Minister Louise Mushikiwabo as the head of a group of French-speaking countries, International Organization of La Francophonie.

“The Rwandan foreign minister has every competence to carry out this role,” Mr Macron said during a press conference with his Rwandan counterpart Paul Kagame, reports news agency AFP. “I will support her.”

He also vowed to strengthen ties with Rwanda and praised Kagame for sharing his belief in “strong multilateralism”.

“We hope to continue working together… both on the bilateral level and for the African continent,” President Kagame said.

Resolving “the complexities of the past… will probably take time,” said President Macron.

“What brings us together are the questions of peace and security in Africa,” he added.

The meeting on Wednesday is the third between Mr Kagame and Mr Macron in a year.

Diplomatic relations between both countries have been strained since Rwanda accused the French of complicity during the 1994 genocide, which France denies.

A French judge implicated Mr Kagame in the Rwandan genocide of 1994, an accusation which he rejected.

More than 800,000 Tutsis and some Hutus lost their lives during the violence.

Rwanda joined the Commonwealth in 2009, despite its historic association with Francophone countries.

The former colony of Germany and Belgium became the second country to be admitted without a British colonial past or constitutional link to Britain.

English was made an official language in Rwanda, alongside French and Kinyarwanda, after the Rwandan Patriotic Front (RPF) took power in 1994.

This is because many of RPF’s Tutsi leaders grew up in exile in English-speaking countries like Tanzania and Uganda. —— AUTO – GENERATED; Published (Halifax Canada Time AST) on: May 24, 2018 at 11:51AM

Did you find apk for android? You can find new Free Android Games and apps.
Sharing is caring:
world news, rwanda World News, Rwanda No Comments » Print this News