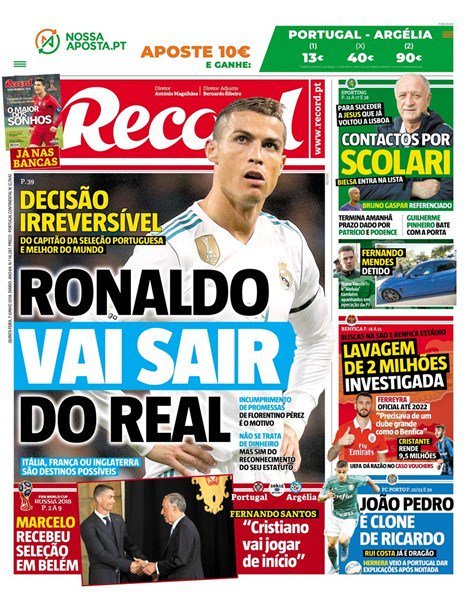 SPUTNIK – It’s very likely that Real Madrid superstar Cristiano Ronaldo will leave his team and return to Manchester United, an Italian newspaper reported. However, France’s Paris Saint-Germain is also competing to have Ronaldo on its roster.Ronaldo, the superstar forward of Spain’s Real Madrid and Portugal’s National Team, is determined to leave the club in favor of the UK’s Manchester United after the World Cup, said the Italian newspaper Libero on Monday. The website 101GreatGoals.com characterizes Libero as “a paper who usually steer clear of transfer gossip and football news.”

According to the report, the renowned player, who scored an impressive hat trick against Spain on Friday, will move to Old Trafford-based Man United once the tournament is over. However, the French club Paris Saint-Germain (PSG) is currently competing with the British club for Ronaldo, the report says.

The rumors about the forward leaving the Spanish club emerged right after the end of Champions League. On June 6, Spanish paper El Confidencial announced Ronaldo’s plans to leave the team, which was followed by an edition of the Record next day that had “Ronaldo Is Leaving Real” all across the front page of its paper.

​Record reported at the time that Ronaldo had made an “irreversible” decision to leave the club. Apparently, it was the club’s reluctance to raise the forward’s payroll to match that of Lionel Messi’s 55 million euros per season that caused the split. Florentino Perez, Real Madrid’s president, reportedly told Ronaldo and his agent Jorge Mendes that the club would be increasing the player’s payroll, but it has failed to live up to the promise. Currently, Ronaldo earns 21 million euros per season, according to 101GreatGoals.com.

Meanwhile, speaking earlier this month, former Real coach Fabio Capello claimed Ronaldo was hellbent on returning to United, according to the Express.

“I think that Cristiano Ronaldo wants to go back to Manchester,” the UK newspaper quotes him as saying. “I think he wants to play for United and be coached by his compatriot Mourinho.”

« Wikipedia article of the day for June 19, 2018 (Previous News)
(Next News) UGANDA: Playing at a theatre near you – KAYIHURA MOVIE »