The unrest occurred at a state funeral for Simegnew Bekele, lead engineer on the $5 billion Grand Ethiopian Renaissance Dam project, who was found slumped at the wheel of his car Thursday with a gunshot wound to his head.
Bekele’s body arrived in the city’s Meskel Square about 11 a.m. local time in a hearse adorned with garlands, followed by about 50 white cars. Witnesses told CNN that some members of the crowd became angry after they were prevented from following Bekele’s coffin to the church where he was to be laid to rest. 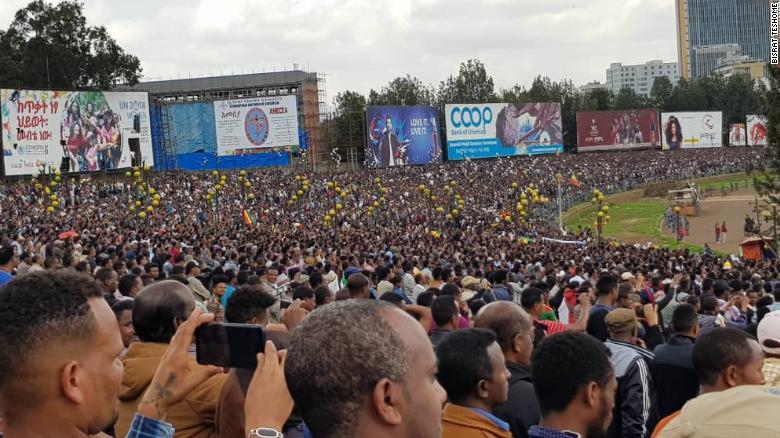 The scene at Meskel Square in Addis Ababa during a state funeral for Semegnew Bekele.
“For about 20 minutes, they were chanting that this government is not yet democratic,” said Bisrat Teshome, 35, an economist who was at the square.

Several protesters then attempted to climb a pole and replace the current Ethiopian flag, which bears a star, with an older version without the emblem, in an act of political defiance.
The star is a symbol of diversity and unity, but there has long been public annoyance that it was added to the flag without proper consultation, Teshome said.


“They (the police) started throwing tear gas in between people. Then everyone ran away. It was the first time I had seen tear gas,” Teshome said.
A handful of people were rushed to a hospital after being sprayed with tear gas, witnesses told CNN.

When CNN contacted police to ask about the tear gas, an unidentified spokesman declined to comment and hung up the phone. Follow-up attempts to obtain a comment from Ethiopia police have so far been unsuccessful.
Tens of thousands of Ethiopians gathered for Bekele’s funeral at Meskel Square — the same place where his body was found three days earlier in what is widely believed to be an assassination.


Shouts could be heard across the capital as those gathered called for a proper investigation into Bekele’s death.
Security for the state funeral was extremely tight, with roads around the square closed and armed soldiers lining the streets.

A popular figure
Bekele was a hugely popular figure who had become synonymous with the nation’s ambitious flagship dam project, a source of national pride.
“This guy had been the hope of Ethiopians,” said Abel Wabella, 31, managing editor of the Gobena Street news site, who was at the funeral. “He had been telling people about this mega-project for seven years. Everybody knew who he was.”

A huge brass band led Bekele’s coffin through the city to Holy Trinity Church, where he was to be buried alongside Emperor Haile Selassie I, the late prime minister Meles Zenawi and British suffragette Sylvia Pankhurst.
In a country splintered by tribal politics, Bekele’s funeral was a uniting factor that crossed ethnic lines.
“All the ethnic groups in Ethiopia are saddened and angered by what happened to him,” said Wabella. “The people here are not Amhara (Bekele’s tribal group).” 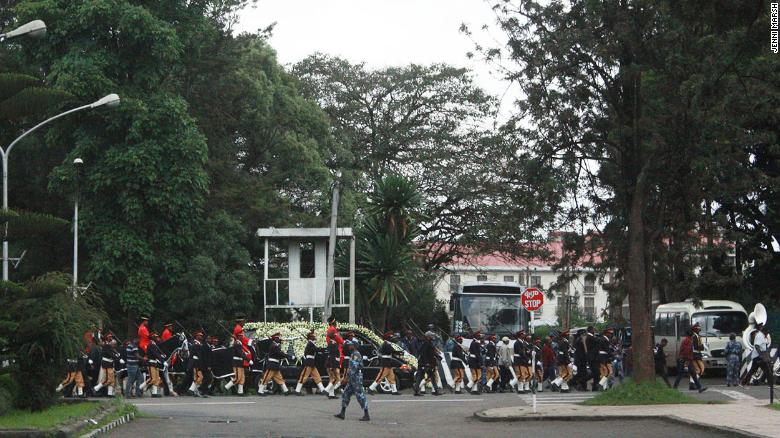 A time of revolutionary change
Ethiopia has undergone a period of unprecedented change since Prime Minister Abiy Ahmed took office in April.
This is the third time the public has rallied en masse at Meskel Square during Abiy’s tenure as the nation’s leader.
In just over three months, Abiy has released thousands of political prisoners, ended the state of war with Eritrea, pledged to open up the economy and, just this weekend, visited Ethiopian immigrants in Washington, DC, to ask them to return to help build the country’s democratic future.


But while there is currently a surge of optimism in Ethiopia, there is also caution.
At a rally attended by Abiy in Meskel Square in June, an explosion killed two people and injured over 150. The day after, citizens organized a massive rally in the same spot to show their support for Abiy’s reforms.

Abiy is Ethiopia’s first prime minister from the Oromo ethnic group, which makes up about a third of the African nation’s 100 million people. His appointment by the country’s ruling coalition was seen as a move to calm divisions between the Oromo and other ethnic groups.

The Grand Renaissance Dam
The Grand Ethiopian Renaissance Dam is one of Africa’s most ambitious infrastructure projects, reaffirming Ethiopia’s goals of becoming a key regional player and a major exporter of power.
When completed, the dam on the Blue Nile River will generate around 6,000 megawatts of electricity for both domestic use and exports.


The most striking aspect of the nearly $5 billion enterprise is that it is entirely funded by Ethiopia, without any foreign investment. According to the authorities, 20% of the project is financed from bond offerings to Ethiopians, and the remaining 80% from tax collection.
Belachew Mekuria, head of the Ethiopian Investment Commission, said that everybody in the country felt they had contributed to the dam — one reason why Bekele’s death has rocked the nation so powerfully.
“This project signifies a lot because it means saying no to Ethiopia’s characterization as a land of famine, as a land of poor people,” he said.
In short, he said, the dam’s success would “symbolize” Ethiopia’s future.

Did you find apk for android? You can find new Free Android Games and apps.
Sharing is caring:
world news World News Comments Off on ETHIOPIA: Police fire tear gas at protesters during state funeral for Grand Dam engineer Print this News