ETHIOPIA: Govt needs to end the persecution of a key ethnic group to achieve real reform 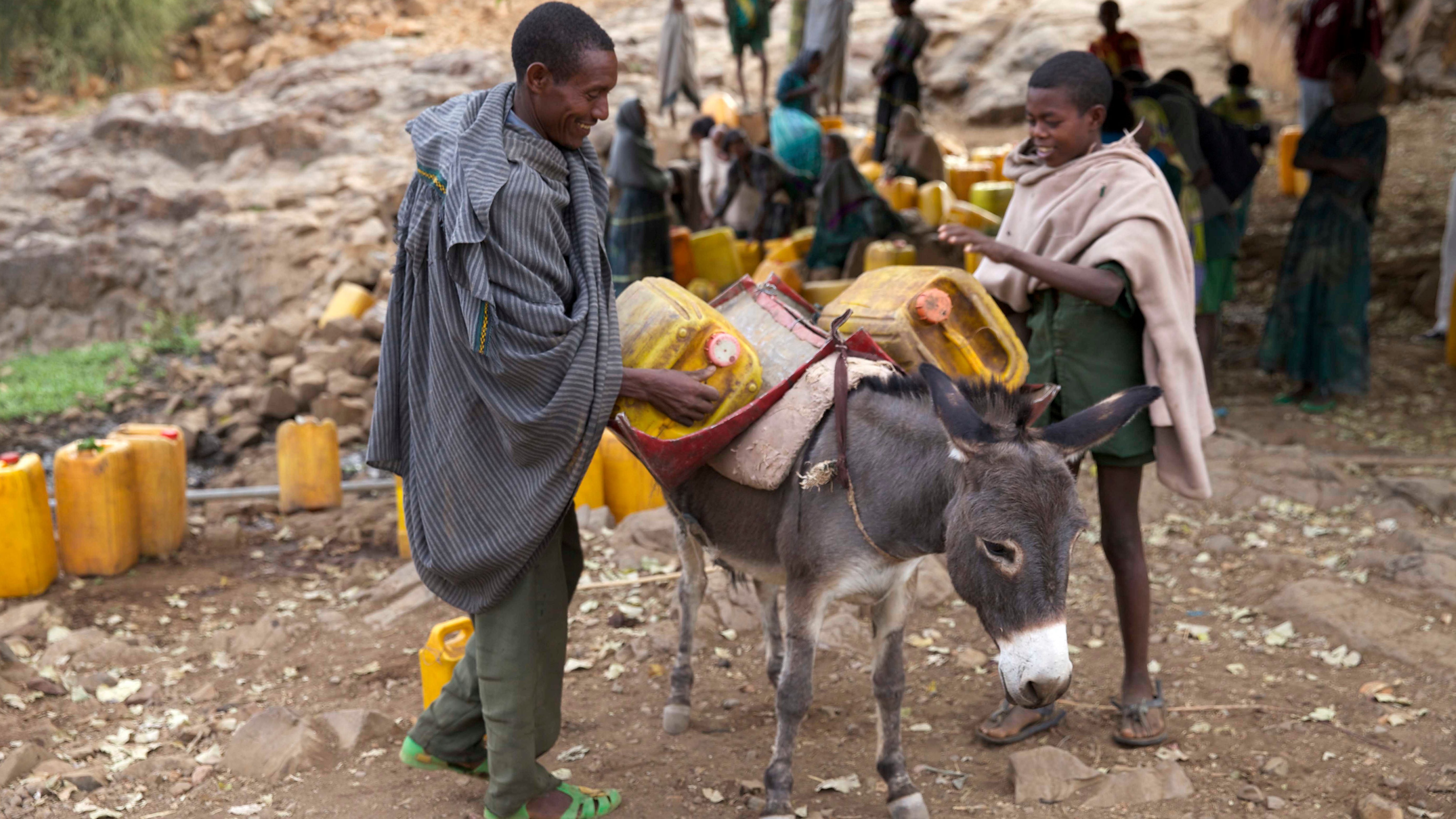 A man and a boy load a donkey with jerrycans of water collected from a stream outside the village of Tsemera in Ethiopia’s northern Amhara region, (Reuters/Katy Migiro)

The political upheaval that Ethiopians have become accustomed to seems to be a thing of the past—for now. Many have praised the new prime minister Abiy Ahmed, who took office in April 2018, for restoring calm to much of the country. Some have even dubbed his reform agenda a massive turn around for Ethiopia.

There has been progress on his watch. Ahmed has overseen the release of political prisoners, as was promised by former premier Hailemariam Desalegn. Most recently he lifted the state of emergency that was imposed after Desalegn unexpectedly resigned in February 2018 after five years in power.

As a result of the federal system, Amharas in various regional states are now considered settlers in their own country. But it hasn’t all been rosy—especially when it comes to the ongoing eviction of ethnic groups in various regions in the country. The targeted eviction of ethnic Amharas in the regional states of Benishangul Gumuz and Oromia is especially worrying. Thousands of Amharas have been evicted, killed and tortured. Although cases of evictions have recently increased, the problem started in 2012 when thousands of Amharas were evicted from the Southern Region.

The Amharas are one of Ethiopia’s two largest ethnic groups; the other is the Oromo. Together the groups account for about 60% of Ethiopia’s population.

Mistreatment of Amharas has drawn the attention of several human rights organizations, including Amnesty International which has called out the pattern of ethnically motivated attacks and displacement.

To end such ethnic attacks and unfortunate instances of targeted evictions, Ahmed’s new administration must consider institutional reforms. My research shows that Ethiopia’s regional states and their constitutions have been designed in a way that bestows ownership of regions on certain ethnic groups. So, for Ahmed’s reform agenda to take full effect such laws need to be amended.
Why target Amharas?

The Tigrayan People’s Liberation Front, which is one of the constituent parties of the ruling Ethiopian People’s Revolutionary Democratic Front, has always considered ethnic Amharas an enemy. It has used their perceived historical dominance as the basis for forming a coalition of minorities to oppose their push for a united Ethiopia.

Take for instance the the regional constitution of Benishangul Gumuz. It states that “although all peoples who live in the region are recognized, the ownership of the region belongs to ethnic groups such as Berta, Gumuz, Shinasha, Mao, and Komo”. This means that residents from other ethnic groups are considered settlers or outsiders. Other regional constitutions contain similar provisions, which have historical roots.

When Ethiopia’s military regime was overthrown in 1991, the country’s unitary state structure crumbled and a new federal arrangement was introduced. The federal system was based on ethnicity, language and geographic considerations. Amharas, who are considered advocates of Ethiopian nationalism, were unhappy with the new arrangement.

They believed that it would put the national unity of the Ethiopian state in a precarious position. They also felt that a federal state would leave them vulnerable since millions of Amharas live in all parts of the nation.

They were right. As a result of the federal system, Amharas in various regional states are now considered settlers in their own country. For years, they have been subject to evictions, property destruction, and killings. Just recently documented orders (in Amhraric) that called for such evictions were made public. The orders were given by regional officers.

It’s unfortunate that there has been no sign of this stopping under Ahmed’s rule. Targeted evictions persist; the most recent happened in April 2018 when Amharas were thrown out of Oromia.

Prime Minister Ahmed has addressed the latest Amhara and other minority evictions calling them unfortunate events that do not represent the values held by the majority of Ethiopians. In a live address to the nation, he promised that government will address the issue as soon as possible.

So far, however, the new administration has been unable to control the regional forces that are behind the forceful evictions of Amharas from their lands. If the evictions continue unabated it will endanger the whole nation’s peace and security.

Ahmed’s reform agenda could also easily be derailed by the disenfranchisement of ethnic Amharas, who recently formed a new political party to represent their interests and those of other minorities such as the Wolayta and Gedio.
Solving the crisis

Ahmed’s new administration must quickly address this humanitarian catastrophe. Oromia Regional state has started to address it, but a lot remains to be done. One way to manage the situation is through a constitutional amendment to ensure that every Ethiopian can live anywhere in the republic. It’s only then the evictions of Oromos, Amharas and other minorities can become a thing of the past.

Constitutional amendments will require a consensus between the four parties within the ruling Ethiopian People’s Revolutionary Democratic Front, through a parliamentary process.

Finally, Ahmed must entrench the ideals of Ethiopiawinet (an Amharic word for “Ethiopian-ness”): tolerance, peaceful coexistence, mutual care, and the advocacy of values that bind all Ethiopians together. The fact that the premier has admitted past failures that entrenched ethnic violence and evictions is welcome progress.

Now is the time to invite scholars, elders, religious leaders and all stakeholders to come together and forge a new alliance to ease ethnic tensions.

This article was originally published on The Conversation. Read the original article. —— AUTO – GENERATED; Published (Halifax Canada Time AST) on: June 21, 2018 at 11:32AM