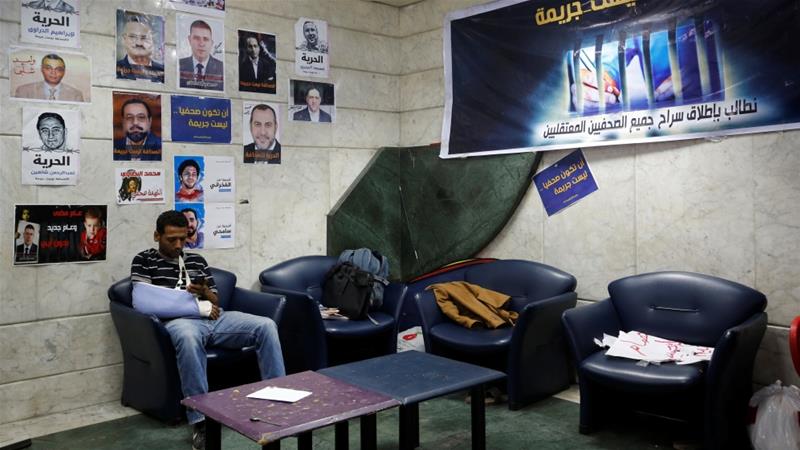 A journalist sits beside pictures of fellow journalists who have been arrested and a banner that reads “The press, It is not a crime” during World Press Freedom Day in Cairo [Amr Abdallah Dalsh/Reuters]

AL JAZEERA – The arrest of Hazim Abdelazim is the latest in Egypt’s ongoing crackdown on dissenting voices.Egyptian police have arrested a one-time campaigner turned critic for President Abdel Fattah al-Sisi, a police official said on Sunday.

The police official did not give a reason for the overnight arrest of Hazim Abdelazim, but a source told Reuters news agency that he was arrested on suspicion of publishing false news and inciting against the state.

He’s especially active on Twitter, where he has 752,000 followers and regularly criticises Sisi and his policies.

“I have been right and I have made mistakes, and my biggest mistake was accepting to join Sisi’s campaign,” Abdelazim’s Twitter profile reads.

Abdelazim’s arrest is the latest development in what rights groups say is a campaign to silence government critics.

The interior ministry could not immediately be reached for comment.
Arrests and disappearances

Egyptian authorities arrested numerous bloggers this month, including award-winning blogger and journalist Wael Abbas at his home on Wednesday, accusing him of involvement with an illegal organisation and publishing false news.

“The path the Sisi government took has been linear – eliminating the public sphere, or the political space has always run alongside arrests of dissidents, activists and human rights advocates,” said Fadi al-Qadi, a commentator on human rights in the Middle East and North Africa.

“The truth is, no one is immune under Sisi… these two incidents of arrests are probably meant to dismiss any thought that Sisi may tolerate certain types of dissent in Egypt – on the contrary, he does not,” al-Qadi told Al Jazeera.

Alexandrani, an expert on insurgency in the Sinai Peninsula, was arrested in November 2015 and accused of belonging to the outlawed Muslim Brotherhood.

This week many have also been spreading the word on Twitter about the disappearance of Walid Salem, PhD candidate at the University of Washington.

“By introducing new restrictive NGO legislation, detaining journalists, and prosecuting human rights defenders and subjecting them to travel bans, the government is working to eradicate independent civil society in the country.”

Since 2013, international human rights groups have criticised Sisi’s government for cracking down on secular and left-wing activists, as well as those who share ideology of the Muslim Brotherhood.

However, his supporters say his tough security policy is needed to ensure stability as Egypt recovers from years of political chaos and tackles economic challenges.

Sisi was elected president a year after heading the 2013 military ouster of democratically-elected President Mohamed Morsi, amid mass protests against him.

He won a second term in office last March after securing more than 97 percent of the vote.

The presidential elections featured only one other candidate – himself an ardent Sisi supporter – after all serious opposition contenders halted their campaigns citing intimidation and several arrests. 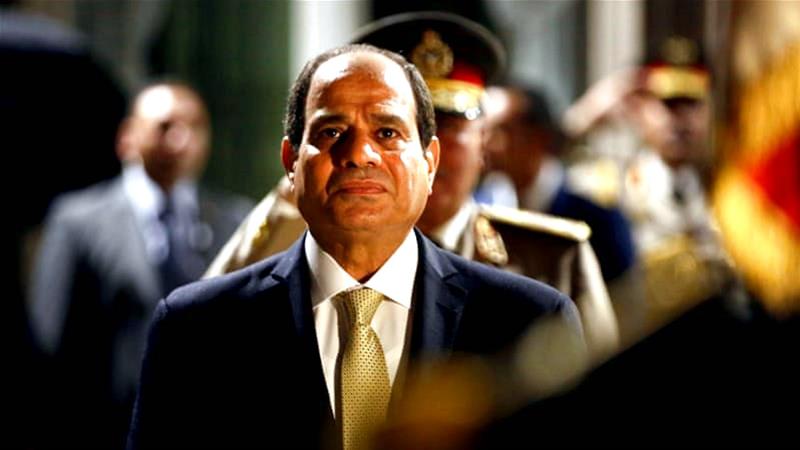